Our content strategy has been determined from the start, wherein the channel will provide a fresh offering to movie lovers: Sai Prakash, Zee Cinemalu

ZEE Cinemalu was launched on 4th September, 2016 by the Megastar Chiranjeevi,  with ‘Dil Pai Super Hit’ as its brand tagline and became the first movie channel to introduce the concept of World Television Premieres in Telugu market, giving a unique offering to movie lovers. Zee Cinemalu reaches out to 55 million viewer’s week on week in Telangana and Andhra Pradesh.The channel has a wide range spanning various genres like Family, Drama, Comedy, Horror and Thriller. In this process, and has successfully occupied a special space in the hearts of Telugu audience across the state. The Zee Cinemalu HD variant was launched on December 31, 2017.

It has been an eventful 4 years, how has the journey been?

Zee Cinemalu has experienced an unparalleled journey over the 4 eventful years with countless milestones. The channel began with 90GRPs and with its unique content strategy has reached 252 GRPs, with an average of 276 GRPs in the last 6 weeks. Launched by the Megastar Chiranjeevi, who unveiled the logo, the channel today reaches 55 Million viewers week on week. Zee Cinemalu ranks number 2 across the small screen film market in Telangana and Andhra Pradesh and had ranked number 1 in the Hyderabad market in the last two financial years. We believe Zee Cinemalu’s journey resonates with the brand tagline “Dil Pai Superhit” having experienced a strong positive journey for being the youngest channel in the market, wherein the other players have established their presence in their unique ways. 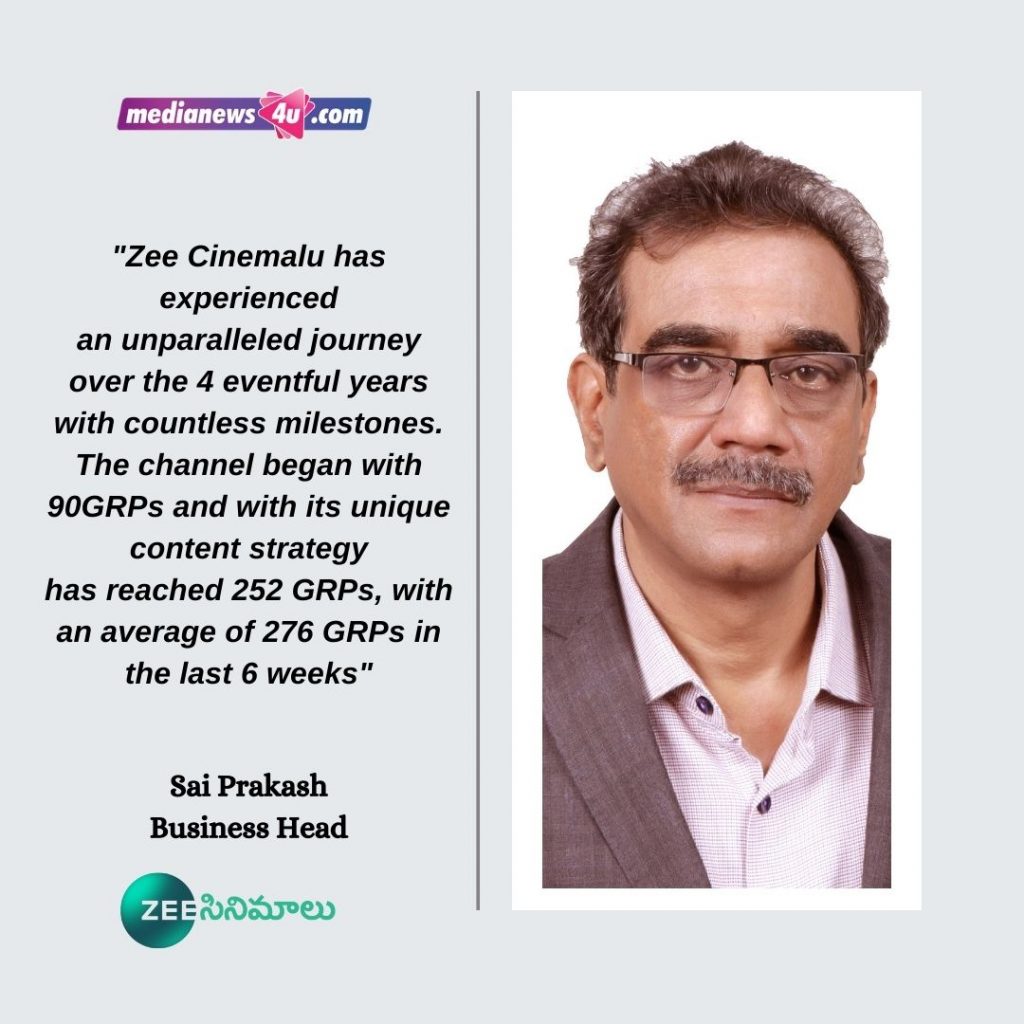 The south market especially the Telugu market share on cinema is huge, how have you filled the gap?

The Telugu market is definitely a market where movie consumption is phenomenally high as it contributes to around 36% of the overall television consumption, which is highest in India, followed by Tamil Nadu. The movie genre share was around 12-13% in 2016 and has witnessed significant growth ever since as it ranges to 19% today.

Our journey began with a relative share of 14.8% in 2016-17 and has increased to 25.3% in the course of 4 years. The last 4 weeks stand at an average of 27.7% relative share. In another way, Zee Cinemalu and movie genre complement each other in both GRPs and relative share growth.

Tell us a little bit about your competitors and what has been your content strategy to stay on top?

As we all know, the television movie genre moved from 3 channels to 5 channels genre last few years. Every player has created a unique identity in the minds of their target audience. In this competitive scenario, it is always the content offering that helps stand out and results in the final numbers. While the business objectives may vary from network to network, channels play to their strengths to secure their respective market share. Our content strategy has been determined from the start, wherein the channel will provide a fresh offering to movie lovers. This has helped the channel grow to become synonymous with the best of Telugu movies on small screen television. At times, we experiment by airing 9 or 11 movies of various genres in a single day to offer new viewing experience. Having ingrained the channel’s proposition, Zee Cinemalu was the first movie channel to introduce the concept of World Television Premieres in the Telugu Genre. We also repeat the content from our mother channel, Zee Telugu Entertainment based events on Zee Cinemalu along with other movies, to obtain a larger viewer base. 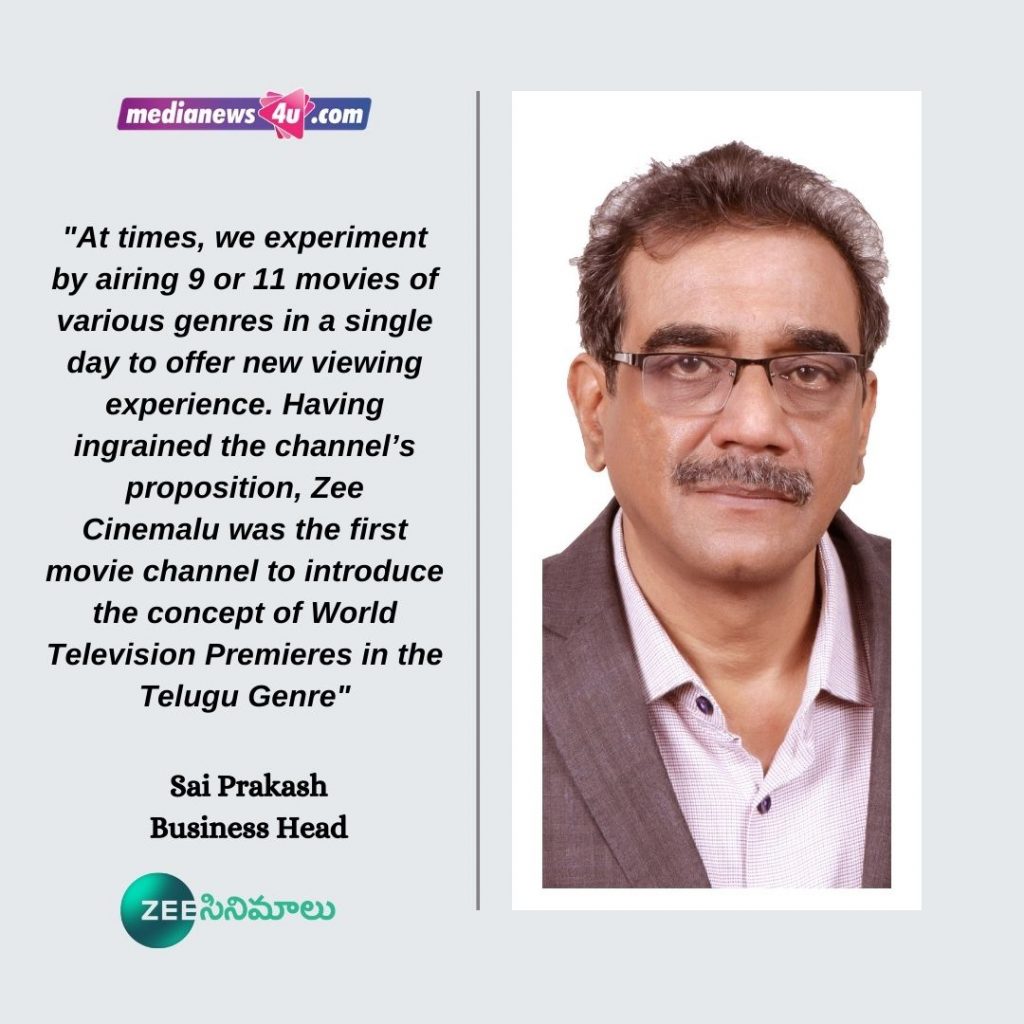 In the Telugu market ZEE Cinemalu started the trend of airing World Television Premieres, what was the strategy behind this?  Where do you see the channel in the next 2 years?

Since the launch, our objective has been to be a game-changer in the industry. Our USP of Premier movies on the channel was introduced to differentiate Zee Cinemalu from the other market players. It was clear that we aimed to lead from day one and this reflected in the marvellous numbers secured. Naturally, like any other channel, we have had our ups and downs during our journey, and we ensure to learn from every experience. We launched the channel with a concept of 7-days-7-Premiers to get initial traction and with movies such as Kumari 21F, Akhil, Matangi, Idi maa Premakadha, Kukka Lunnayi Jagratha, Chinnari, Naga Bharanam that have contributed in our market presence. Our journey of focused approach with fresh offerings will continue even in the years to come. 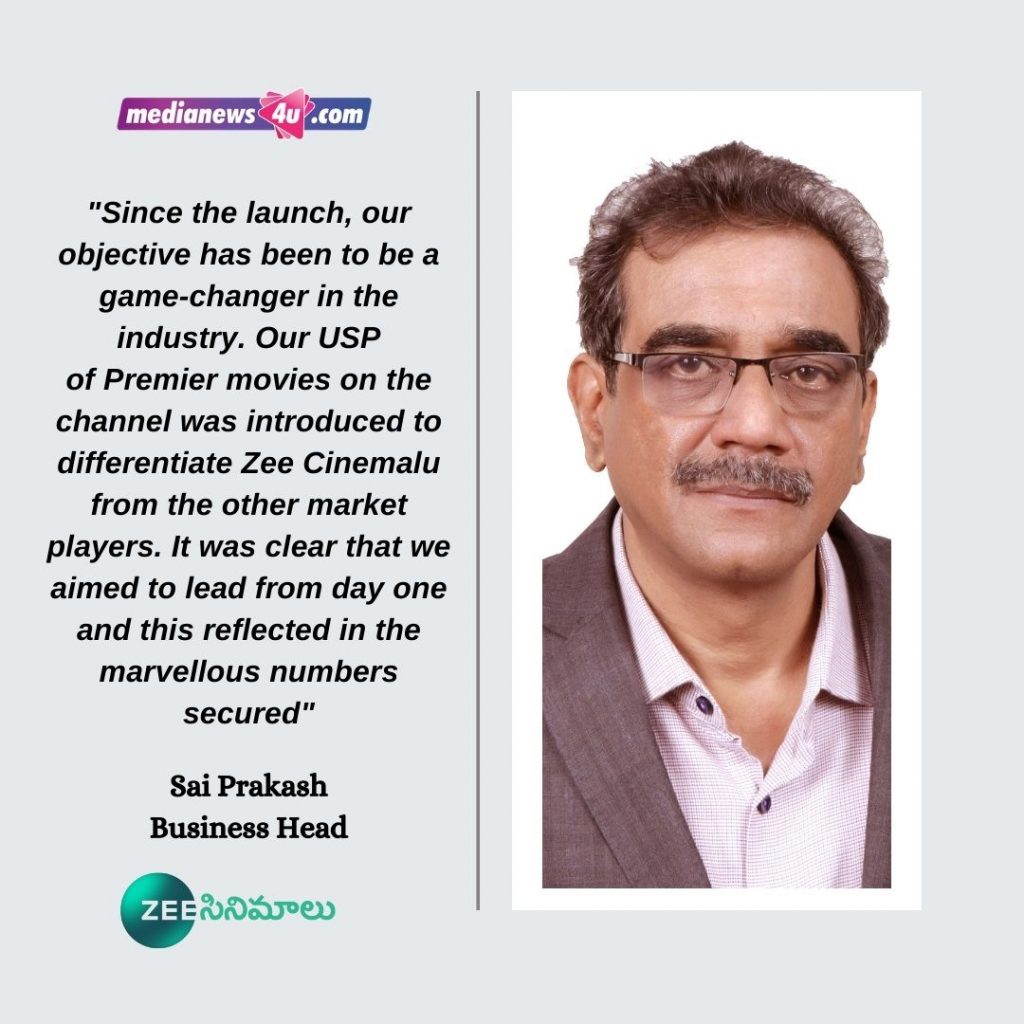 With OTT now seeing a spike, with movies getting a first look on OTT how are you seeing the trend?

Movies on small screen television will continue to remain for family viewing whereas OTT is more of individual viewing.  In the post-COVID-19 era, when the theatres open, viewers will resume to experiencing movies in theatres, which is quite different from the OTT experience. I believe, movie channels and their movie libraries are far too superior in comparison to the offerings via the OTT platform, both in terms of quality and quantity, and the edge for television channels is family viewing. 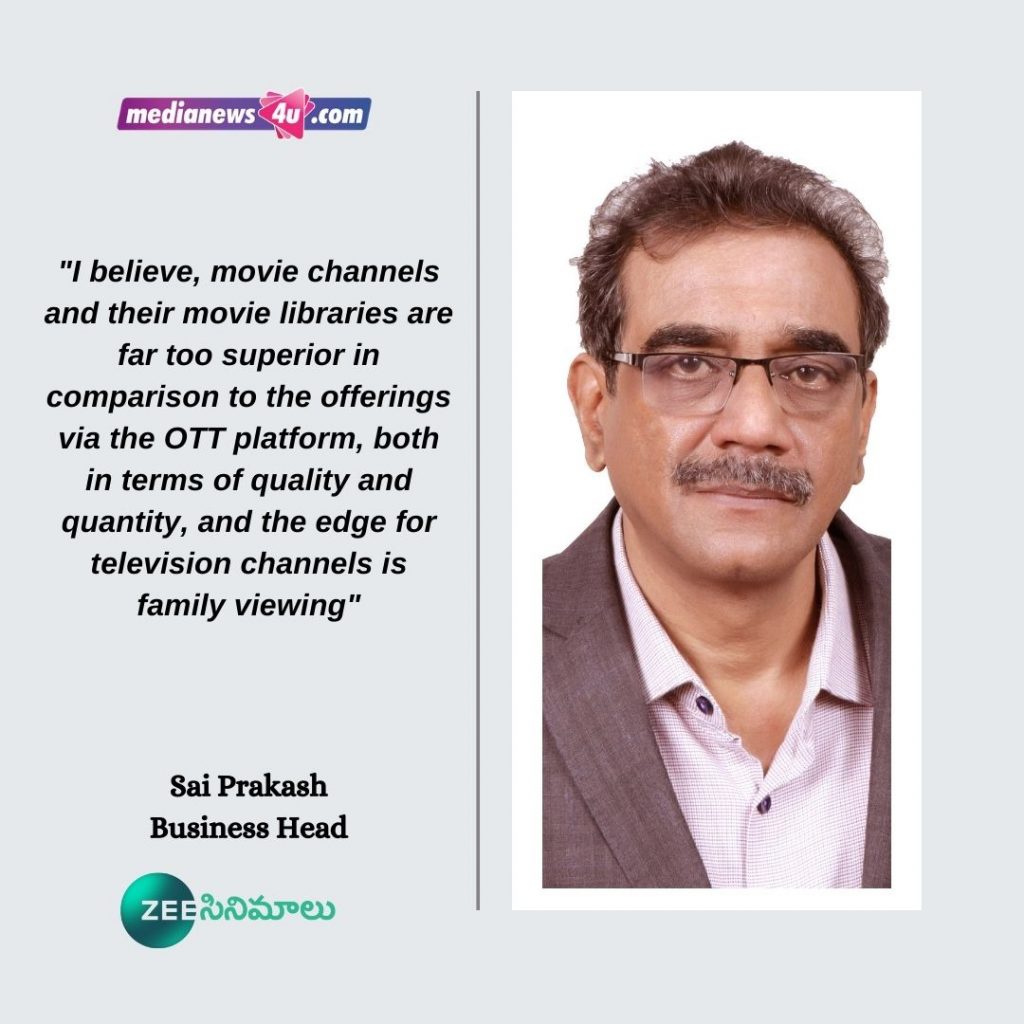 In this COVID period have you acquired any new films?

We are acquiring small budget movies which are content-driven like Donga, Arjun Survaram, Crime 23, Bhanumathi and Rama Krishna, Lakshmi besides the leading upcoming title. As a Telugu network, we continue to acquire new movies to strengthen our library. As this is a movie driven market, new titles to the channel will add freshness to the content. 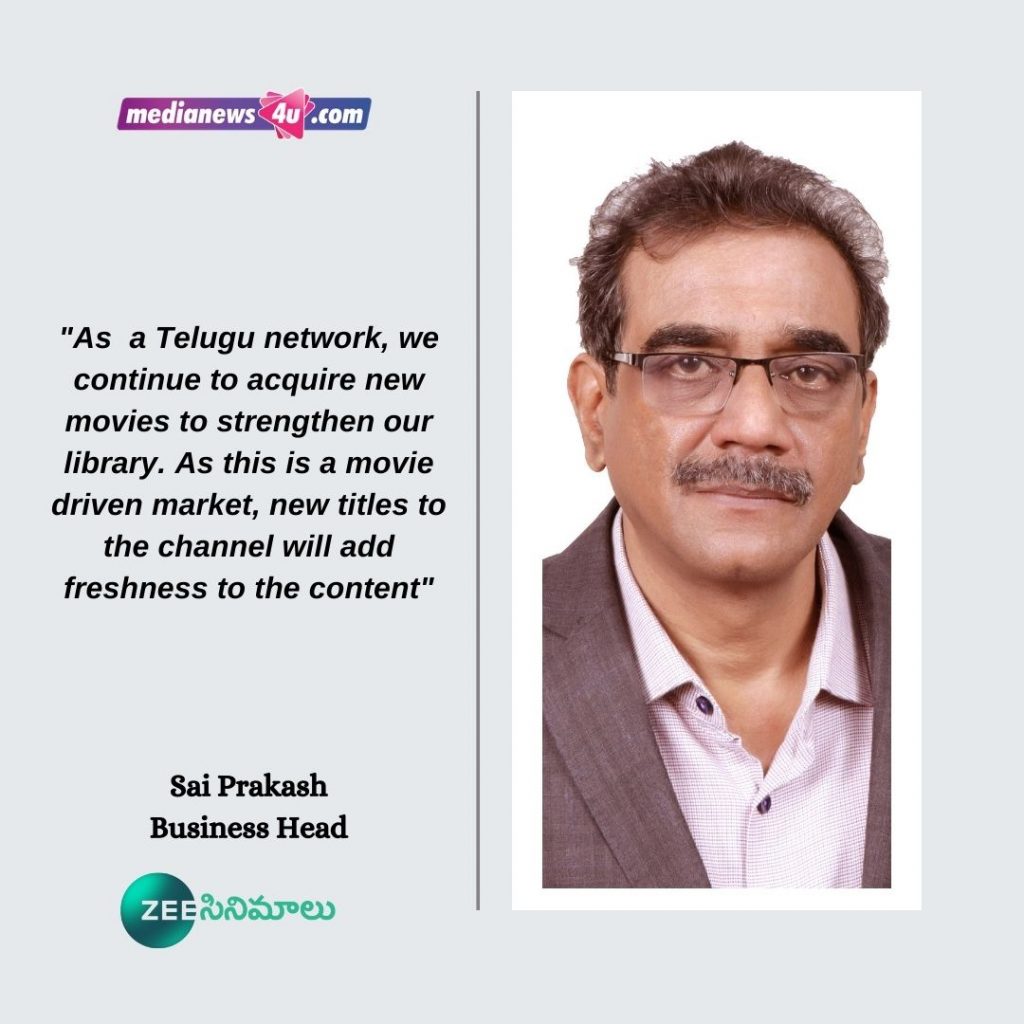 Mumbai: Affle (India) Limited together with its subsidiaries (“Affle”), today announced that its platforms have been accredited under the Accreditation@SG...

COVID 19 diminishes by 3 per cent in Nov over October as the biggest worry, as the Vaccine hopes go up: Ipsos Survey

New Delhi: One in two urban Indians (50%) believe COVID-19 is our biggest worry though it has slightly diminished over...

Data science is a continuous activity, and the additional data keeps helping us make better predictions for our clients: Dhananjay Arora, Kwebmaker

We will continue to explore interesting and innovative partnerships to showcase Singapore’s diverse offerings and our brand identity to our audience: GB Srithar, STB

Ad fraud had been a growing concern among SEA’s marketers, resulting in significant losses in their marketing budgets: April Tayson, Adjust