Over the last 2 years, we have grown our selection of games from 9 to 100+ across multiple genres: Nakul Kapur, Games at MX

MX Player is an entertainment super app that caters to over 280 million Monthly Active users in India, integrating all forms of entertainment on one platform – including video playback, streaming video, music and gaming.

MX Player launched its gaming feature in February 2020, it has grown exponentially, and this tournament style slew of hyper casual mobile games is now available across its Android and iOS apps.The online gaming industry has seen an upward trend since 2020 on the back of a ‘mobile first’ phenomenon. It now hosts over 100 hyper casual games that can be played for free and come with multiple layers of tournaments and rewards for winners. The past year saw a huge rise in the number of visitors on the platform and the total time spent on it.

In an exclusive interaction with Medianews4U, Nakul Kapur, Head of International Business & Games at MX talks to us about the launch of the gaming App, the success and much more……

Gaming platforms are seeing a rise in this new normal, what do you attribute this to?

The gaming industry has been thriving due to many favorable factors: increasing smartphone and internet penetration, an increase in the supply of world-class titles, games with localized content, and new features such as multiplayer and social elements. These have all catalyzed the growth of gaming in India and made it a mainstream entertainment option. However, the biggest driver has been the Covid-19-induced lockdowns that acted as the tipping point in unlocking the power of online casual gaming. Online gaming is one of the few sectors that have grown aggressively during the pandemic. With restricted mobility and fewer entertainment options, consumers have taken to gaming like never before. 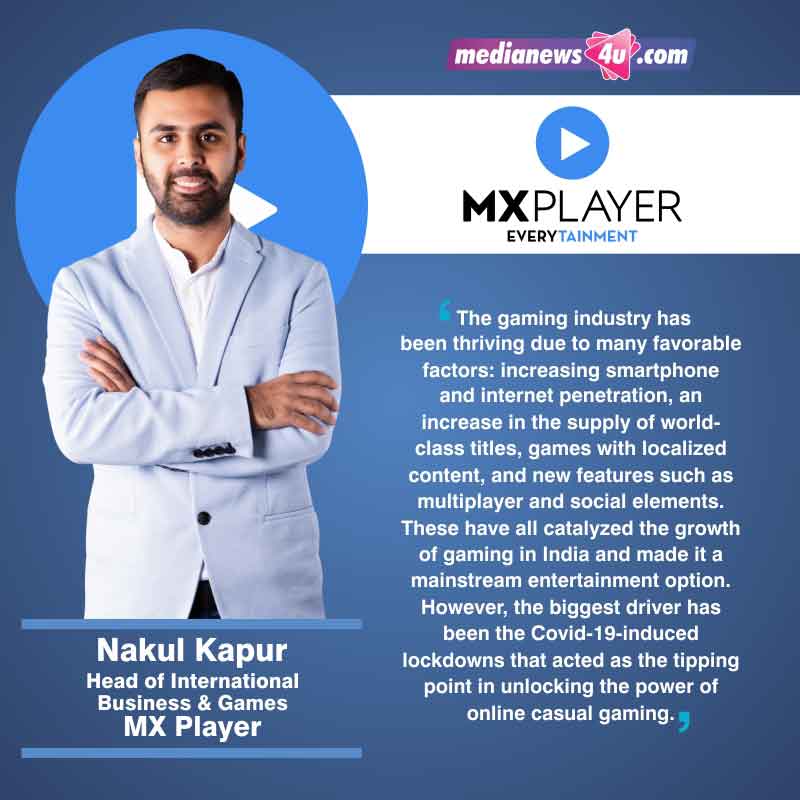 Can you take us through the journey of Games on MX?

We started gaming in Feb’20 with a single format of games in practice mode. Over the last 2 years, we have grown our selection of games from 9 to now over 100+ games across multiple genres including strategy, quiz, arcade, casual, sports and a host of other categories to cater to our large and diverse set of users on our platform. We have evolved from a score-based games mode and added a leaderboard along with battle mode games to drive competitiveness. 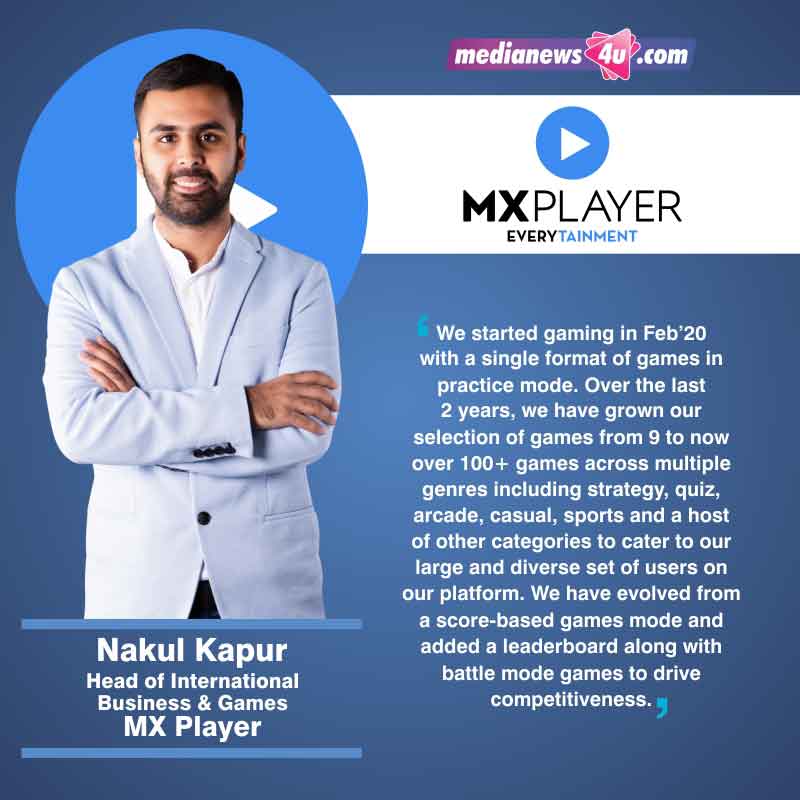 Additionally, we’ve also built and scaled various product features like MX Coins and coupons to drive engagement and increase stickiness for gamers on our platform. In the last 2 quarters, we have also introduced real world rewards and features like Jackpot on the games tab. The real-world rewards were introduced to add to the festive fervor for Indian gamers. We ran campaigns around Diwali and Christmas to make the gaming experience joyous for our users. During these campaigns, we also introduced topical games for users, thereby making gaming even more exciting for them.

We also recently released a report on how gamers spent 4.35 billion minutes in 2021 on the platform with an average of 56 minutes per day. The report is an overall study of what genres are popular on the platform, cities in which the games are played the most and details about the age group and the male: female ratio involved in playing games.

As per latest reports gamers spent 4.35 billion minutes on Games MX, what is the strategy behind this success?

MX Player has always believed in democratizing entertainment for its users with a strong focus on integrating varied entertainment offerings on one common platform. Keeping this vision of ‘Everytainment’ in mind, we introduced gaming as a value addition and scaled the platform with a vast catalog of casual games to serve our large user base. Today, gaming on MX has grown exponentially with over 8000 gaming sessions every minute and all our games are free to play for our users.  Unlike real money platforms, we don’t ask users to put money to play games on our platform. Instead, we have created engagement loops around free to play models with exciting and popular games like fantasy, prediction, arcade, racing, carrom etc. Our idea of casual gaming is to create rich experiences for users that increase games played per session. We have also collaborated with partners from India and abroad who have supported us with a healthy mix of games across genres.

We have regularly innovated our strategy by introducing new product features like battle mode games, skill-based matchmaking, real world rewards, coins to coupon conversion, jackpot and many more such initiatives.

What are some of the innovative Marketing ideas to reach out to your subscribers?

For Games at MX, usually we run topical and festive campaigns. For example, – during Diwali and Christmas, we ran an interesting campaign to make the gaming experience joyous for our users.  In the course of these campaigns, we had introduced ‘Real-World-Rewards’ with daily and weekly gaming tournaments last year for our game-lovers. During Diwali, we gave away rewards like bikes, laptops, smartphones, and others. We also introduced topical games for our users to further engage with them at a deeper level and add to their excitement. Similarly, during Christmas we had announced Spin to Win offers for our gamers, wherein they had a chance to win LED TV, Trip vouchers worth Rs.1 Lac, earphones, and other such rewards. The offers did well for us too.

MX Player today is a leading App today, what are the factors that have worked for you?

For us, the global Indian consumer lies at the heart of everything we do, and we are proud to be a consumer centric app. Our key priorities are technology, content, and the ability to sharply target users who are interested in consuming quality digital first experiences. Our USP is that we produce original and unique content that you don’t get to see otherwise, and these are clubbed with other entertainment offerings which has made us emerge as the entertainment platform of choice for consumers across the country.

What would be the platform’s audience profile? The geographies that MXGames is popular in?

Majority of our audience are male. In the recent report released by us, we mentioned that nearly 96% playing users were below the age of 35, with 74.3% of them being millennials. In terms of gameplays, 94% were from users below the age of 35, with 69.4% of them being millennials. Since our games are available for free across Android and iOS, the majority of our audiences are mostly millennials. Also, the gaming inventory ranges across categories from popular Indian board games to strategy, quizzes, racing, arcade, sports, action amongst others and caters to diverse users across the length and breadth of the country. In terms of geographies, Tier 2 and Tier 3 cities witness more traction. The non-metro user’s engagement is 20% higher than the metro user’s engagement. Cities like Patna, Delhi, Lucknow, Kolkata, Jaipur, Ahmedabad, Hyderabad, Chennai, Pune, and Mumbai were among the top 10 cities that contributed to 66% of the gameplays on the platform. 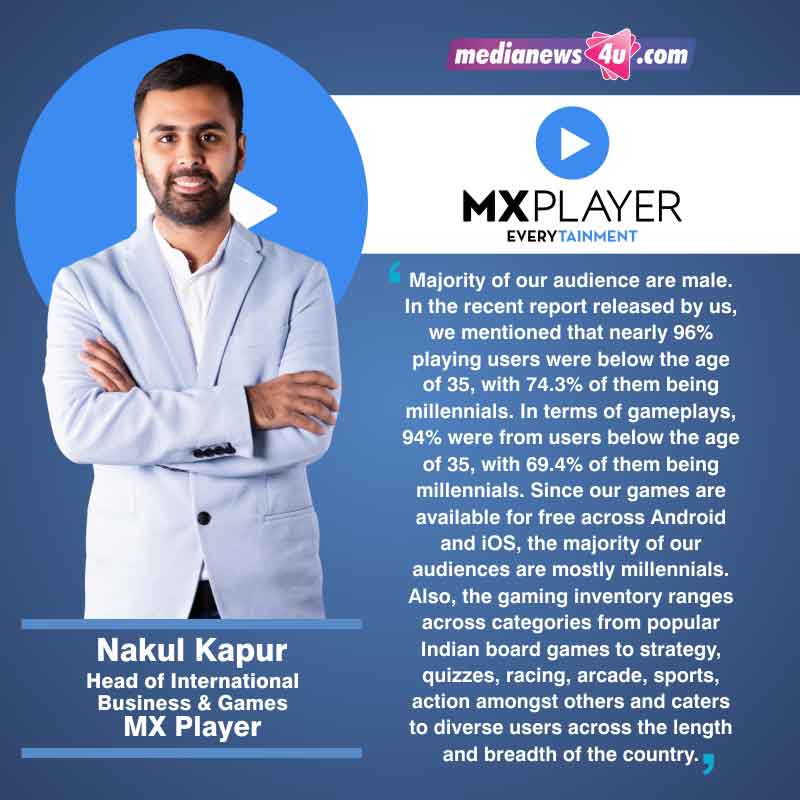 Which are the genres that are very popular with your audience?

Our gaming inventory ranges across categories from popular Indian board games to strategy, quizzes, racing, arcade, sports, action amongst others and caters to diverse users across the length and breadth of the country. Casual, Arcade, Survival, Strategy and Action genres constitutes nearly 71% of the total gameplays on the platform. Among these, Bubble Blast is India’s most favorite game with over 336 million gameplays followed by MX City Cricket Battle and Boom Knight Game.

The gaming industry globally is growing at a very fast pace, and we want to be at the forefront of driving that change, leveraging MX Media’s strength of over 300Mn Monthly Active Users globally. The Indian gaming industry has seen tremendous growth in terms of both the number of gamers, as well as the user engagement levels in the last few years.

We believe that India will remain a mobile-first market owing to factors like low cost of devices and internet packages, and casual gaming will continue to grow aggressively in the time to come. We are also diversifying the category of games that are available on our platform by adding newer genres like battle-mode, fantasy, card games along with going deep into the existing genres of sports, arcade, action, racing etc.  We are also looking to create a meta within our platform that would enable us to have a deeper engagement with our users by offering them vanity items or in-game consumables in the form of characters, unique power ups etc.  We are coupling these features with an increased focus on expanding our games portfolio globally. This is a key focus area for us at MX Player which would further enable us to take gaming to the next wave of millions of new users across the globe. 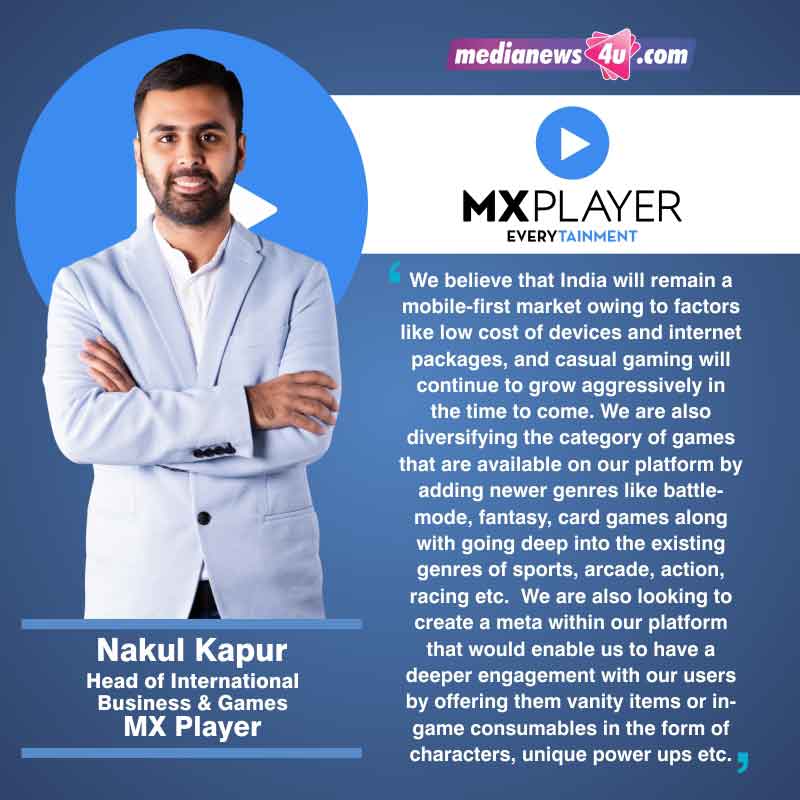 CleverTap, the retention cloud leader, today announced it has signed definitive agreements to fully acquire San Francisco based Leanplum, a...

PivotRoots, a Mumbai-headquartered digital marketing agency, has acquired DeepFlux, a MarTech consultancy, for an undisclosed amount. The company will integrate...

By definition, metaverse is a virtual-reality space in which users can interact with a computer-generated environment and other users. According...

Virtual production could be a gamechanger for the animation industry. Here’s how!