Part two of the in-depth conversation with the Mirum India bosses, Sanjay Mehta and HareeshTibrewala follows below. In this part they talk about talent in the digital space, their take on innovation and way forward for Mirum India.

Can you possibly quantify the percentage in terms of the business growth that happens?

Sanjay:For example, With AMFI it’s an industry, which is about 20 plus years old, and there was a certain growth rate of new folios, which is nothing but new people joining. The rate at which those investment numbers have grown over the last two or three years that we’ve been associated has been sloped in a trajectory which indicates growth and nothing else. It’s completely measurable. Through AMFI website we have a lot of analytics which tell us how many people come to the site, what is the sort of content they consume, how much time they spend, and how many people want to invest. So how many people go to that their entire data and analytics is being tracked at a very detailed level on an ongoing basis to see really that everything we attempt is converting in terms of results.

What do you think about the talent in the current digital space? Do you feel any difficulty in retention of talent?

Sanjay: There is obviously a demand for good talent the word gets around today the world being so transparent. Everybody’s on Facebook and LinkedIn so there are no secrets about who are the stars in an organization and then those people get approached by other agencies.

From Mirum’s point of view one might have seen or read that we just recently got certified “as a great place to work.” We are one of the first agencies to have got the award. It’s an award, which is given based by surveys run anonymously with employees and obviously they must have said good things about the work culture and the experience that they get here. We don’t say that we don’t lose people or we don’t have attrition. But we’ve been fortunate with kind of policies and it’s not a constant churn but we have our average industry average kind of attrition happening. Particularly in mid-level and senior level positions we have fairly decent stability, maybe they identify with the larger picture that we’ve been able to position and of course, all the other things that happened in HR, so we’ve been able to retain.

Overall, as an industry the demand for digital talent is far outstripping the supply. Because either clients, or an agency but everybody wants to recruit digital talent so there is definitely a valid demand. I don’t think there are enough educational institutions pushing out new good talent or there are good courses also, somebody else comes out from college and immediately gets absorbed. So that mismatch will happen when some new industry comes up like sunrise industry or something.

What we also tend to do is in especially new areas that we get into for example in the marketing automation or some of these phases where it’s not the easiest thing to go and find ready talent, we from our end have actually invested into training. We take people who have some basic kind of skills for whom we have a full-fledged training department inside the agency which gets them ready. Expecting that they’ll be ready talent available from somewhere and they’ll just come in and take over may be slightly unrealistic. Our field is constantly evolving and new things are happening. 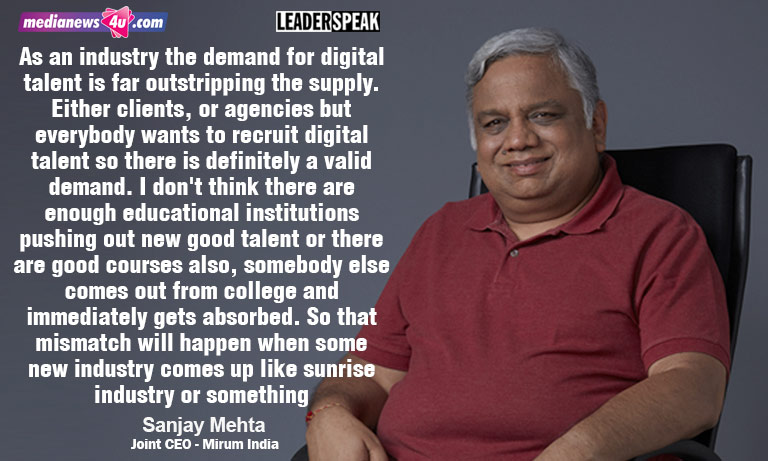 Hareesh: Honestly, innovation is a big term. Everybody says I’m very innovative, that actually comes from doing something that actually uses to solve a problem. So honestly, the most important is to solve the problem. Some of the problem solving may involve innovation and the client of mine should take those distant chances, which is not always very easy to manage, so most of the work is basically fixing problems and solving a problem while some part of it maybe innovation.

Sanjay: Innovation is a widespread word. Problem solving as in jugaad is not what we think and we are definitely a very process oriented agency. So even when we find answers to problems, it’s not about doing a quick fix somehow and get going. I think that doesn’t work in the long term. However in times of crisis and somehow we have to come out of it that’s fine, but fingering an answer, and an answer which is sustainable I mean, I’m talking within the organization. Similarly with the client, I think the approach is not a ‘jugaadu’ approach it’s more of the right understanding of the challenge and the right answers, and then implementing them and making things happen.

With the amount of experience both you gentlemen have is immense, which would be some key learnings which you would want to share with our readers?

Hareesh: Key learning in general not necessarily digital, is it there is no substitute for hard work, success is finally 99% perspiration and 1% inspiration you keep on hearing stories of people who come up with a business plans, which say that we’ll go and raise an x amount of capital at the end of the year we will retire, that doesn’t happen in practice.

When we started the business 10 years ago, we used to put in 16 hours a day, I think today also we put in 16 hours a day so there is no getting away from it. The mindset remains still very entrepreneurial. Whether we are big or small relative, from where we started,today we are big. To where we actually want to go, we are very small. There is absolutely no substitute for hard work.

The second learning is that your people are very important. The second line of command that you have is really what drives the entire show. Sanjay and I both know each other for a long time we went to college together did our first business together and Mirum is our second business together. The first business was an e-commerce company. When the dot com bust happened, one mistakes that we did was to let go off our senior people mainly a bunch of three VPs because they were the most expensive in the entire company. And we realized the journey was so hard when you don’t have people around you can think with you. We always try to invest in people in such a strong talent of mature people in the organization. But if both of us don’t come to work for a month, nothing will change. No client will know, nobody will know, life will run completely on its own. The big learning is that you really have to invest in senior people. These senior people need to bring thinking beyond what you want and if my people can’t think beyond me then this company can’t work. One needs to constantly keep finding those people who can challenge your thinking, who can bring something new organization and who can take that weight off your shoulders so you are able to spend time strategizing and building new pieces. The people’s part is really very critical and this percolates right all the way down.

If somebody gets a chance to join Mirum, they will be very happy. We are known as a company where you kind of get to learn and do lots of things. And we just finished one employee has been with the company for 10 years. Every fortnight we recognize somebody who finished so many years like for us. Because they feel invested in the company in the success of the company, it’s not just the salary, it’s everything is that we bring along with it, the pace at which we run and our treat people in the vision and the new things we keep on adding and the place where we keep on going. And the opportunities, we keep on giving to our team because you know, maybe three years back up, there was a chance to travel abroad only Sanjay and I would go, however at this point of time there are about 20 people in the company traveling abroad and working. 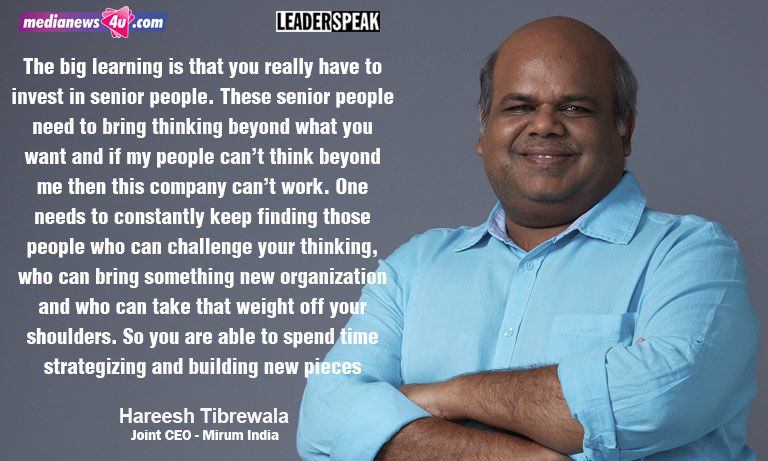 Going forward what are the growth plans for Mirum India?

Hareesh: There are no acquisitions in the plan as of now, but a lot of new things are happening such as in the area of AR, VR and voice technology which can create value for brands. Maybe we’ll have more expertise on things like data and DMP becomes a part of the product offering that we offer. A lot of these things are going to happen, we keep on looking for new things which integrates with our core offerings. We’re looking at exploiting lots of those opportunities. And I’m sure some new things will keep on adding to the basket where we are.

Sanjay: One of the areas which we identified was in the healthcare space. With all the digital around, one industry with large sectors, which has been a relatively slow starter from digital point of view is healthcare.

Very slowly but surely the healthcare space is opening up to the opportunity. And sensing that, we have invested again into creating a specific Mirum Health offering as a vertical. And we’ve got domain specialists on board and are working with a few healthcare companies already. We see that as a big growth area from a domain point of view. We are going to a healthcare business, offering them the entire gamut of digital services whatever is relevant for that business. It’s an industry which has a lot of going on and a lot of controls and restriction because it’s the medical space to understand all that and still communicating with a doctor, or with patients or with a caregiver in a critical analyst kind of scenario and to create all the different kinds of engagement models and different kinds of communication spaces is what we are working on in the health care space. 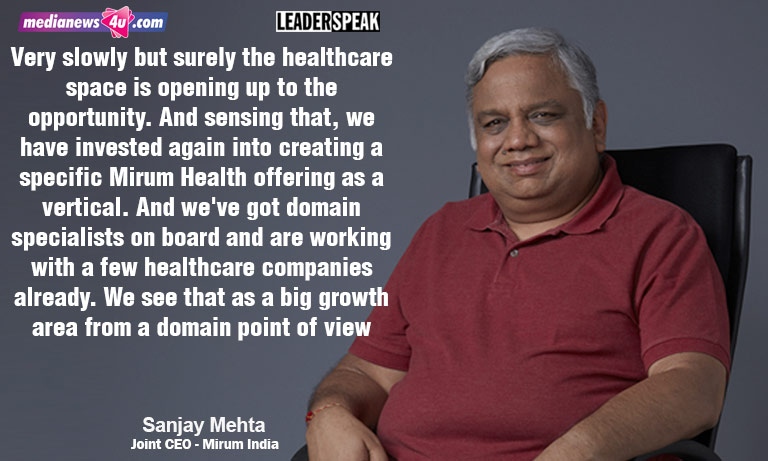 As per media reports, Saugata Mukherjee to head SonyLIV’s original content category. Mukherjee was earlier associated with Hotstar as Creative...

Jaipur: In the changing environment today, the audience is the new age storyteller. ZEE has always told extraordinary stories of...

Our goal is to make basketball one of the most popular sports in India: Rajesh Sethi on Focus 2020

Kodeeswari has already touched a lot of lives not only in the state of Tamil Nadu but across the country,...

2020 will see change in the PR industry at its most rapid pace : Xavier PRabhu,Founder & Managing Director, PRHUB

Neeraj Bassi to move on from Publicis India

Our mission is to help clients in understanding consumers, categories and citizens: Amit Adarkar, Ipsos India