Social-distancing leading to a spike in digital consumption suggest experts, Not Contagious, only Addictive!

The impact of the Covid-19 pandemic on businesses and industries has been massive. Not just India but the whole world has come to a standstill, people are working from home, all major public places are shut, school and colleges are shut, all live sporting events too have been either cancelled or postponed IPL being one of them. Television shoots too have been put on hold, multiplexes are shut, film releases have been postponed.Almost everyone is under house arrest, until further notice needless to say that there is immense amount of uncertainty.

One of the very few sectors that have seen an uptick and some positivity amidst the Covid-19 menace is the online entertainment space; particularly the over-the-top platforms.  According to a Nielsen report, Americans are already spending just under 12 hours a day with media platforms, which adds upto to a 75 percent broadening of their media options with streaming subscriptions and connected devices. 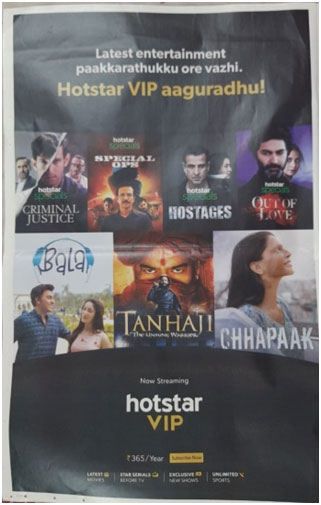 Indian OTT platforms such as MX Player and Hotstar are already making the most of this opportunity by advertising in newspapers and other mediums. One such print ad by MX Player had an attractive copy which read as “No Malls & No Halls? Stay Safe with Free Entertainment Within Your 4 Walls” 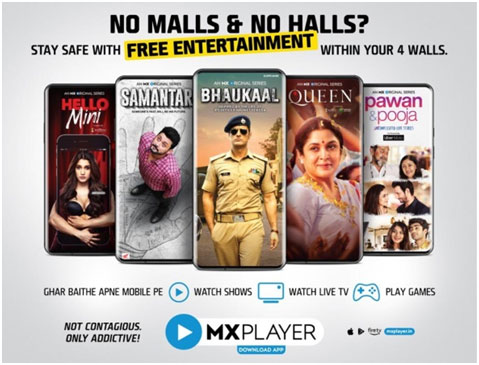 ShemarooMe is also planning to premier a new Bollywood movie every Friday, rightly tapping into the movie buff audiences. A 15% increase in content consumption is what Zubin Dubash, COO of Digital Entertainment at Shemaroo told Medianews4u.

Dubash said, “The mobile phone has become our go-to during social isolation. A way to stay connected. An antidote to anxiety.Also, a way of distraction away from the negative news.” 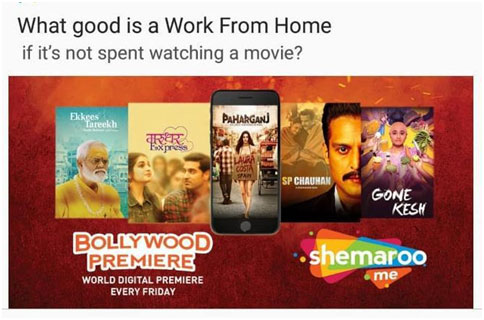 On the spike in time-spent and viewership ShemarooMe has seen during the social-distancing period Dubash said, “With the outside being inaccessible, we have seen a clear spike. Viewership and downloads of ShemarooMe have jumped by 12% WoW downloads and 15% increase in content consumption. Diverse audiences have logged onto our platform and are spending much more time watching and consuming content.”

On the campaign ShemarooME has launched, Dubash said, “We are also using this spike to do our bit and all our platforms have our “Namaste Campaign” – a roundup of the precautionary measures outlined so we can educate and create awareness, even as we continue to entertain.”

The spike and uptick in digital consumption is truly a global trend, talking about ZEE5 Global’s surge in numbers, Archana Anand, Chief Business Officer said, “Globally, on our platform, we have observed a surge of 6% in viewership across all our content categories including ZEE5 Originals and news.”

Sharing market specific insights Anand said, “Looking at our key markets, Canada has witnessed highest spike in viewership at 13% followed by Middle East at 10% and APAC regions floating between 8-10%. In the coming weeks, with all the content we have rolling out, we are bound to see a further increase in these numbers, as more nations continue to join in the quarantine and implement safety measures.”

Continuing Anand said, “It is imperative that we collectively work together to diffuse the outbreak and flatten the curve and come out the other side stronger.”

According to Siddhartha Roy, COO, Hungama Digital Media,“The seriousness of the situation has made it important for people to reduce their social interactions and stay at home. We have noticed a 20% spike in streaming numbers on Hungama Play between 1st March and 17th March.”

On the geographical segmentation of the growth Roy said, “As of now, this growth has been observed primarily in the metros – Delhi, Mumbai and Bangalore. However, as awareness about social distancing and its importance is increasing day by day, we are observing this pattern in other cities as well.”

On the positioning of ShemarooMe Dubash said, “ShemarooMe is the OTT for the Bharat of India.Our 15,000+ hours of multi-genre, multi-regional content along with our  Bollywood Premiere  is the perfect recipe for “Watch from Home” while India and the world moves to  Working from Home.”

Hungama Play offers over 5000 films in English, Hindi and regional languages, original shows, 1500+ short films, 7500+ hours of TV shows and kids’ content and over 150,000 short format videos. Roy on their library said, “Our library is updated on a weekly basis and we are continuing with the practice even now. In the coming days, we’ll be releasing new movies like Hollywood blockbusters, Knives Out and Bombshell, among others, besides new Hindi and regional movies, along with short format content.”

On the consumption trend observed by OTT platform HOOQ TV, Zulfiqar Khan, MD, HOOQ India said, “In these unfortunate circumstances people are spending more time at home and this is only bound to increase in the coming days. With more families spending time together, we have certainly seen a spike in the subscriber base with the audience wanting quality entertainment within their own walls. Hence, we have been working consistently to bring in best in class content like Once Upon a Time in Hollywood, Joker, The Matrix, Wonder Woman etc. so that they can binge watch content and make the most of the time being locked down.’’

On the programming plan, Rohit Jain, MD of Lionsgate South Asia said, “We are fast-forwarding our programming to provide more content to consumers across age groups e.g. Oscar nominated Daniel Craig starrer, *Knives Out* (3 months post the theater release) for the very first time premiered on Lionsgate Play – people can watch it now on any of these telco apps which carry Lionsgate Play: Airtel Xstream, Vodafone Play and Idea Movies & TV. This particular Title was loved by young adults who like murder mysteries. We also have a lot of action flicks like American Assassin, Crank, Gods of the Egypt that males prefer.”

Continuing he said, “We want to ensure people have enough entertainment on their mobile phones so there is some sanity in times when everything else is locked down. We at Lionsgate are following the govt directives strictly and ensuring we keep our employees and partners safe. Globally we have pushed our upcoming theatrical releases of Spiral, Run & Antebellum We are encouraging everyone to work from home and use technology to get work done as much as possible.”

Speaking about how Lionsgate plans to keep the audience hooked onto their content, Jain said, “We understand the whole of India would want to watch content right now so we have upped our investments on dubbed titles. This is in line to our commitment on bringing world-class Hollywood entertainment to Indian audiences in their languages.

April Is an exciting month for us as we have the entire John Wick series including John Wick 3 releasing on our platform in 5 Indian languages (Hindi, Marathi, Bhojpuri, Kannada, Telegu). Apart from this we have Salma Hayek & Penelope Cruz’s action comedy- Bandidas amongst others.”