Mumbai: Sony Pictures Sports Network (SPSN), the exclusive destination for the best international cricket, is all set to broadcast Team India’s first cricket series under the new normal as India tour of Australia will commence November 27, 2020, and will be aired LIVE on SONY TEN 1 channels in English, SONY TEN 3 channels in Hindi and SONY SIX channels in English, Tamil, and Telugu commentary. The highly anticipated tour will be the first international cricket series for Virat Kohli’s team India after a gap of almost 9 months and comprises 3 ODI’s, 3 T20I’s and 4 Tests.

As per the schedule released by Cricket Australia, Sydney and Canberra will host the opening ODI’s and T20I’s at the Sydney Cricket Ground and Canberra’s Manuka Oval. Both white ball series will be a tight contest as the Australian men’s team is coming into the series with an impressive ODI series win over world champions England. The Australian men’s team is also currently ranked No. 1 in the world in the ICC’s T20I rankings and posted a thrilling 2-0 away series win over India last year. However, the Indian team holds a slight edge over its rivals with a better win-loss ratio over the past five years.

The battle for the Border-Gavaskar Trophy will begin with a day-night encounter at the Adelaide Oval on December 17, followed by Tests at the Melbourne Cricket Ground on December 26, the Sydney Cricket Ground on January 7, and the Gabba on January 15. The Adelaide fixture will be the first day-night Test played between the Australian and Indian men’s teams, adding historic significance to a series between two cricketing rivals.

Neither side has lost a day-night Test previously, with the Australian side winning all four twilight Tests in Adelaide against New Zealand, South Africa, England, and Pakistan all seven of their day-night games, and the Indian side winning its only encounter at Eden Gardens versus Bangladesh in 2019. 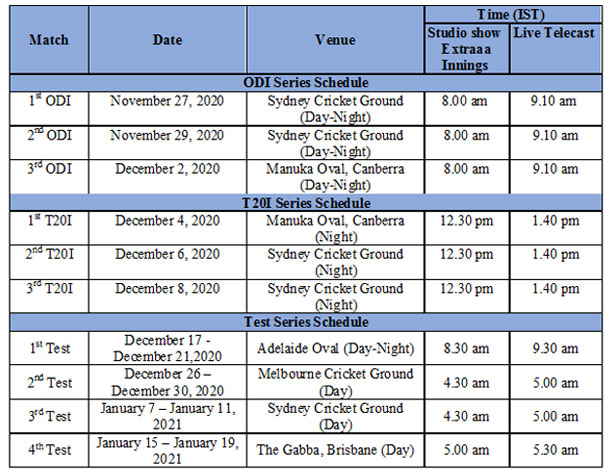