Sony SAB is no longer a comedy channel, we are systematically moving away: Neeraj Vyas

Hindi GEC Sony Sab launched its new show ‘Dharma Yoddha Garud’, the untold chronicle of a doting and devoted son and the show premieres on 14th March at 7:00 PM on Sony SAB.

Indian mythology states that Garud’s wings were mighty enough to flip the turn of the universe. Born to slavery and oblivious of his monarchical lineage, Garud showed extreme dedication and unwavering courage that’s etched in Indian mythology. And it’s time for the world to witness it! Dharm Yoddha Garud reflects on selflessness, honesty, obedience, and bravery which lie at the core of Garud, the devotee and charioteer of Lord Vishnu.

Peppered with state-of-the-art tech and VFX, Dharm Yoddha Garud has been mounted using real-time virtual production technique – Ultimatte which has been used for the first time on Indian television! Illusion Reality Studioz has worked on the amazing VFX for the show which marks the next leap in Sony SAB’s grand attempt at larger-than-life storytelling.

In a conversation with Medianews4u.com,  Neeraj Vyas, Business Head – Sony SAB spoke about from moving away being a comedy channel and much more.

Can you tell us the reason for this show and how will this show disrupt the mythological genre in Television?

Let me start with the punch line, we are no longer a comedy channel, very important for audiences to realize this, we have systematically moved away from the position for 2-3 years. It’s impossible to sustain a comedy show in terms of quality writing, casting and other things on a daily basis. The making of a two hour comedy film is itself an effort. Imagine making a comedy show 6 days a week, 24 minutes a day and with good quality scripts is next to impossible. Having said that, it was not feasible and was not making sense.  We have a lovely differentiated position for the Sony – Sab brand which is inherent to the channel and the idea was to expand on that space.Whether it is Garud now, or Waghle Ki Duniya, Bhakar Wadi a year back, Good Night India which is a Stand up show with fairly big names in the digital world. It is all differentiated, content which is very unique in its own way. 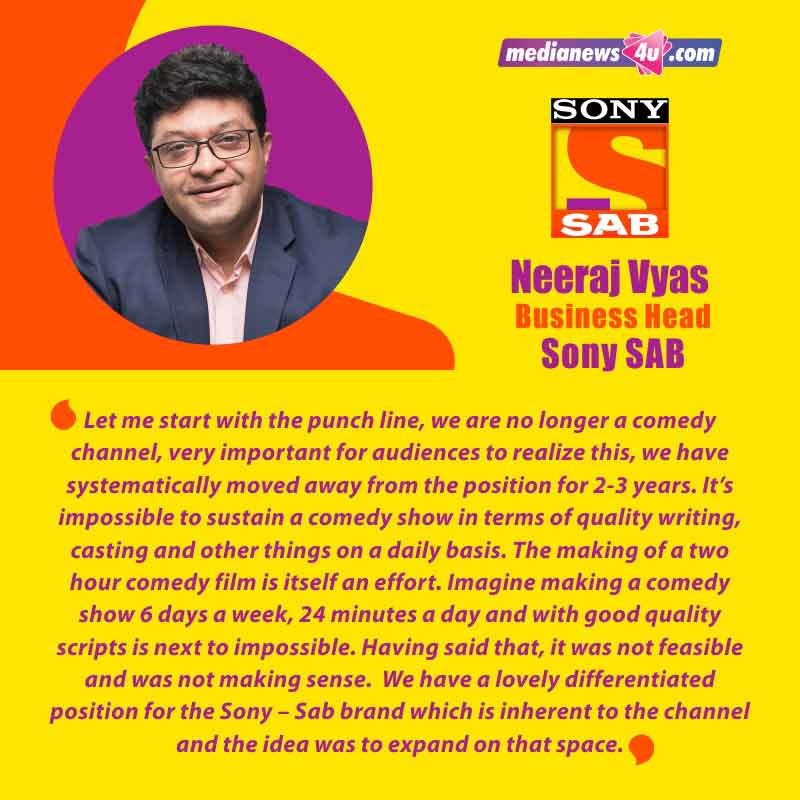 We wanted to do a mythology series, and Garud was our foray in that genre, we could have done a Ganesha or Krishna but we wanted to do something different. I really don’t know why, 25 years of being in the business nobody has attempted to say the story of Garud. The number of characters available in our mythology or shastras and vedas we can make 10 Game of Thrones. Secondly, very importantly we have technology that helps us to tell a lot of stories, which otherwise would not be very great looking.  As Abhimanyu said technology has really helped in putting out great shows and which look authentic today. This gave us a lot of confidence in wanting to explore this story; it’s not about a boy who can fly but his completely focused devotion to his mother. It is a massy story as television is a mass medium and it fits the bill of the channel.

Mythology as a genre, how are you targeting the younger audiences to reunite with their roots?

That’s exactly the point, the one advantage we have is that we are a family focused brand. The one real time statics show that 96% of this country is one TV household and 25-30 kms outside the city limits is a different world altogether. Maybe the extremely urban households have moved away from TV by not watching TV by appointment but watching catch up TV. Our focus is to make relatable content, in all our shows there is an element of youth, stories that impact people’s lives in today’s world. We don’t preach but we want audiences to relate to the characters.

The show narrates a never before heard or seen mythological saga of courage, dedication and mother-son bonding. Introducing state-of-the-art technology and visual effects for the first time on Indian television, we have created a visual experience that shall leave audiences in awe. Dharm Yoddha Garud is a credible value addition to our ever expanding and diverse portfolio and we hope the audience responds positively to this unseen chapter of Indian mythology. 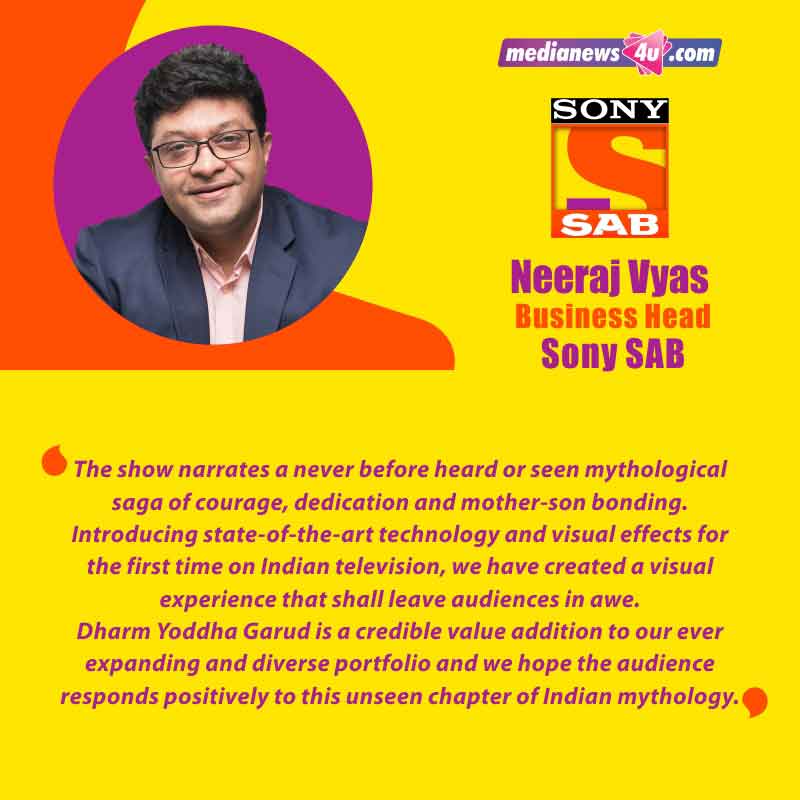 The use of SFX & Technology and how expensive has it been?

Garud is an expensive show. It took us 10 months to decide whether we should do it, can we do it in terms of affordability, possibility and we had to defer the launch twice as we were not ready. It has taken time.

Marketing initiatives for the show beyond promos?

For the first time as a brand we have reached out to the hinterland as we are largely seen as a urban brand. Garud posters have been plastered in Haridwar, Benaras. We have not moved away from being urban centric but we felt this show had the potential of reaching out to this audience far greater than our other shows. 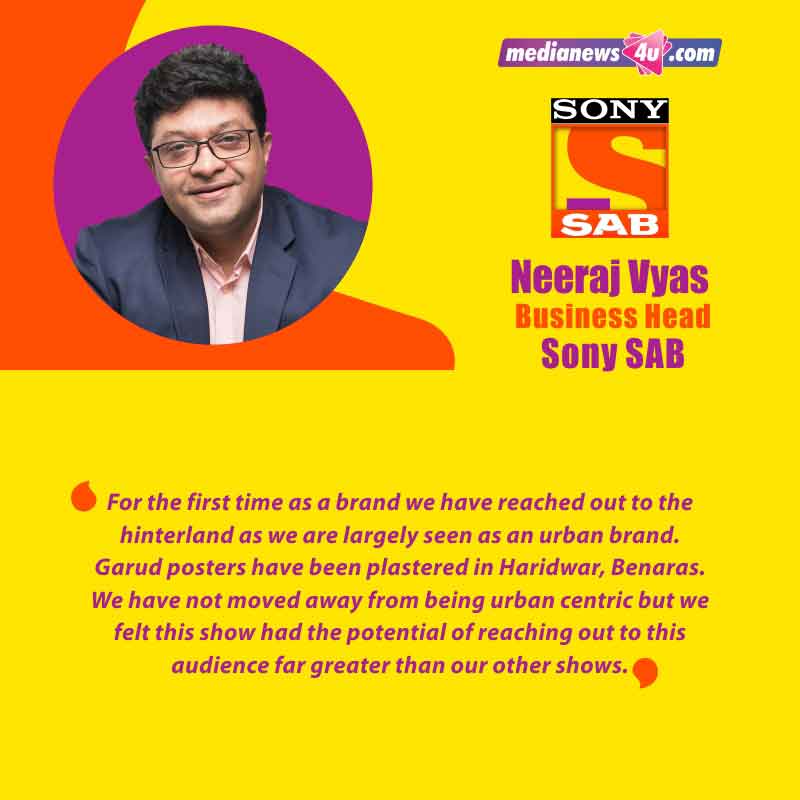 The Pandemic and the after math & the Sony SAB line up for this year?

We have learnt a lot from the pandemic; we had a lot of time to introspect in the first few lockdowns and worked on our storylines, and the next 2-3 launches again are very different.

CleverTap, the retention cloud leader, today announced it has signed definitive agreements to fully acquire San Francisco based Leanplum, a...

PivotRoots, a Mumbai-headquartered digital marketing agency, has acquired DeepFlux, a MarTech consultancy, for an undisclosed amount. The company will integrate...

By definition, metaverse is a virtual-reality space in which users can interact with a computer-generated environment and other users. According...

Virtual production could be a gamechanger for the animation industry. Here’s how!