UP Yoddha this year will aim to push themselves further and make their home state and their fans proud: Col. Vinod Bisht

India is a country were Cricket is worshipped. Star Sports took the plunge and introduced Kabaddi to Indians with Pro Kabbadi League in 2014. It has been 8 years and the sport has really caught the attention of the viewers. Though kabaddi has always been assumed as a rural sport but now thanks to the Pro Kabbadi League it is now part of the curriculum in many schools in the urban landscape.

U.P. Yoddha based in Greater Noida, is owned by the GMR Group. The team was introduced into the league in the fifth season, and has been part of the league ever since. The team made it to the playoffs in every season since its inception in 2017 and has remained consistent in their performance.

Col. Vinod Bisht – CEO of UP Yoddha speaks exclusively to MediaNews4U on the team and its consistent performance and much more.

What made you get into PKL?

Army is all about fitness. Individual as well as team sports are part of any army man’s daily life. We played our fair share of sports along with troops, amongst which one was kabaddi. Kabaddi is a sport that I believe every Indian has played as a child. It is a contact sport with a mix of aggression, skill and speed which makes it popular among all army men. So when the opportunity came through PKL I knew I had to get on board with it. 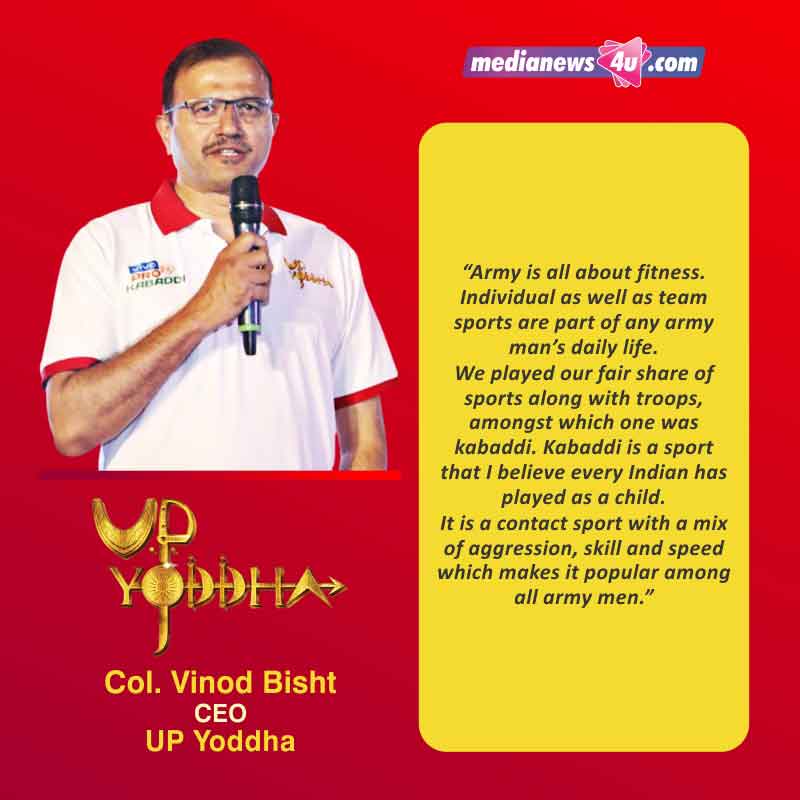 The performance of UP Yoddha over the years?

UP Yoddha has been consistent every season though we still have to reach the finals of PKL but making it to the playoffs of every season so far shows the effort and dedication of the players. All the players that are a part of the team pour in their heart and soul into every aspect that concerns our team’s performance and I am delighted to see how their dedication and passion have brought us results over the years. I have always believed in hard work and dedication and I am confident that the boys will leave no stones unturned in their quest to conquer the final frontier this season. 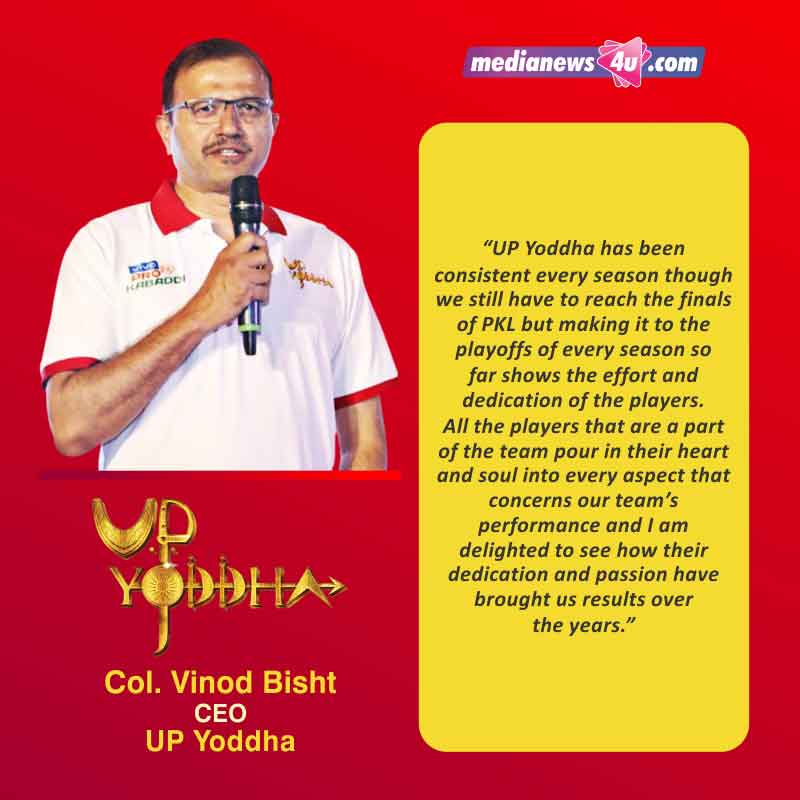 The team has been in the playoffs every season, what would be your strategy this year to be the top team?

As a unit we have always focused on one match at a time and this season wouldn’t be any different. However having said that we all have our eyes set on the final goal and hence we will aim to remain consistent throughout the season. This season our strategy is to blend experienced raiders with young defence. With Pardeep we bring in a player who has seen all and hopefully that rubs on all young players .As mentioned earlier making it to the playoff in every season speaks volumes about our teams consistency, but this year we will aim to push ourselves further and make our home state and our fans proud. 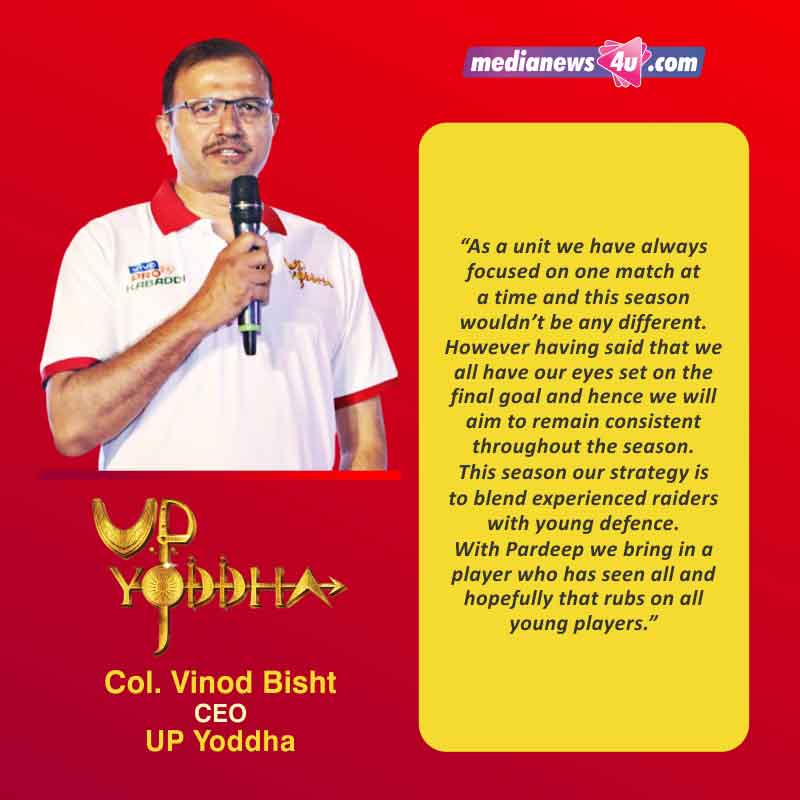 As UP Yoddha, how are you promoting Kabaddi in the region? Kabaddi is still considered as a rural sport. Has the mind-set now changed?

To grow any sport one first needs to make the sport accessible. Yes it’s true that Kabaddi is still considered to be a rural sport but there are a lot of developments that have already happened in the sport, and within the Pro Kabaddi league itself. Now the sport isn’t just about skills but a lot about strength, fitness, agility and mental conditioning where one needs to be capable enough to think on their feet within fractions of a second. In order to professionalize this UP Yoddha has been the first PKL franchise to set up a state-of-the-art Kabaddi Academy in Meerut, and the results are already showing, with 5 of our squad members making it to the first team through our academy.In fact, our captain, Nitesh Kumar is also a product of the BK UP YoddhaKabaddi Academy and I think that speaks a lot about how we as a franchise have left no stones unturned to put Kabaddi as a viable career opportunity for many talented youth in the state of Uttar Pradesh. 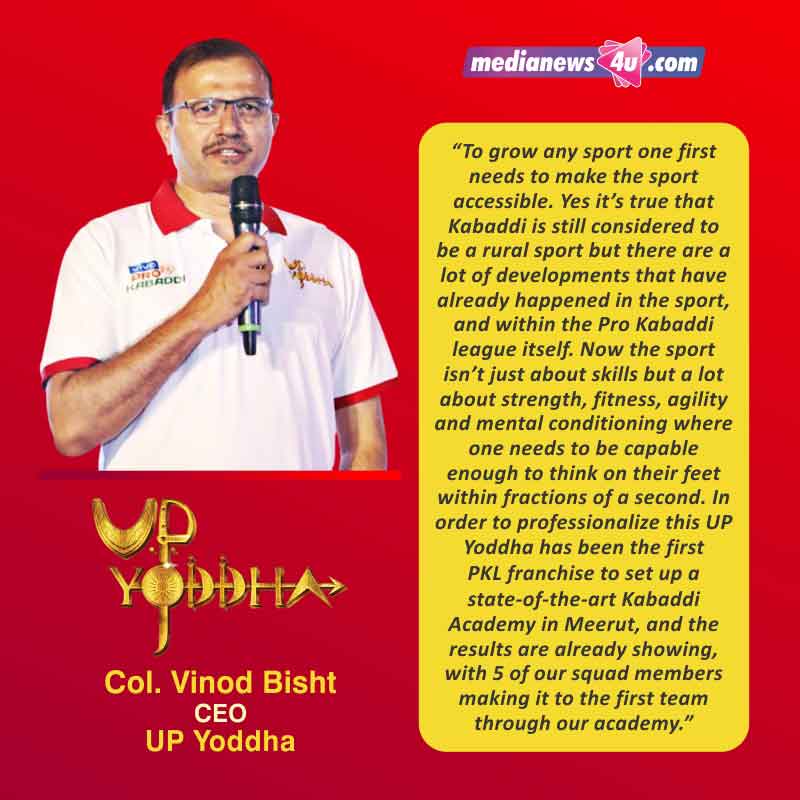 On a personal note as an army man, do you see the same kind of commitment and discipline when it comes to sports?

As an Army man, you are the man for the nation. You put in everything you have to protect your country, and I am proud and honoured to say that I see a similar commitment from each and every member of the UP Yoddha team, starting from the front end first team to everyone in the back office. Our players and every support staff do not lose their focus and train hard day in and day out with just one goal in their mind – to make Uttar Pradesh the Champions of the Pro Kabaddi League. Day in day out these players turn out to sweat it out for the glory for the team and franchise akin to army man doing for his unit and regt. The amount of time and energy they put in to do their part for the team surely reminds me of my army days when we would dedicate ourselves for the service of our country.