Valvoline saw mechanics above and beyond their profession; they are our important support system: Ipshita Chowdhury

In India, Valvoline Cummins Private Limited is a 50:50 joint venture between Valvoline International Inc. U.S.A and Cummins India Ltd.; India’s leading manufacturer of diesel engines and the largest exporter of engineering products – has resulted in Valvoline Cummins Private Limited, that is engaged in the production, distribution and marketing of lubricants, grease and other allied products

Valvoline Cummins Private Limited (“Valvoline Cummins”), the Original Engine Oil maker and a leading global lubricant manufacturer powering the future of mobility through innovative services and products, today announced the 2nd edition of mechanic month campaign in India. Themed – ‘keeping the world moving forward’, the campaign is aimed at honoring mechanics and express gratitude for their ongoing, everyday service and encourage people to thank their mechanics.

The month-long campaign will honor mechanics in numerous countries and will celebrate their importance as knowledgeable professionals critical to keeping engines running – and people moving forward. Mechanics play a key role in the ownership experience of any vehicle and many of us have stories of how a mechanic went over and above their role to help us with a gear box change at night or helped us jump start a car in the middle of nowhere when the car battery gave up.

As part of the campaign, Valvoline Cummins is encouraging the people to express gratitude towards mechanics to keep the world moving forward. The campaign will be activated through different touch points like radio, digital and on-ground.

Ipshita Chowdhury, Head of Marketing, Valvoline Cummins Pvt. Ltd in an Exclusive chat with MediaNews4U speaks on the campaign and the initiative to celebrate the mechanics and much more.

The recent campaign is the second edition, how was the first edition received by your consumers?

Valvoline Cummins has been celebrating Mechanic Month for two years in a row in India. The first campaign came out in 2021 during the pandemic and was focused on thanking mechanics for ensuring all medical and other essential service personnel reached their destinations on time. During this campaign, Valvoline showed their gratitude to mechanics through a series of activities from distributing security kits, educating safety procedures as well as training them while they helped essential personnel to keep moving. The first edition was received well by our consumers as they were made aware of the ongoings of Our Essential Personnel-Mechanics. Our campaign video from last year garnered over 8.4 Million viewers and the campaign was activated over all social media platforms, radio, and OOH. 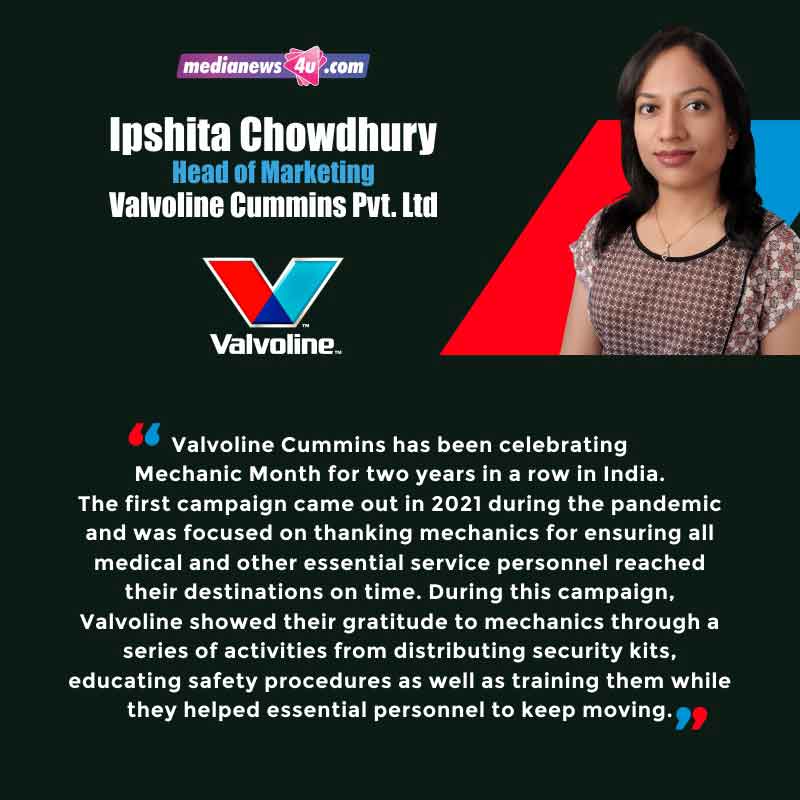 How did Valvoline strategise this campaign?

We have been constantly collaborating with mechanics for various initiatives which has helped us with some valuable insights. One of them has been precious stories of how mechanics have often gone beyond their role to help someone stuck with their cars in the middle of the night. This year, after having heard different stories from consumers as well as mechanics throughout the country, we realized that mechanics were not just someone who serviced our vehicles, but they were heroes who we often miss thanking for their efforts. We saw mechanics above and beyond their professions; they are our important support system available for us. They have been a constant support for all that they do for us-They help us to keep our engines running. 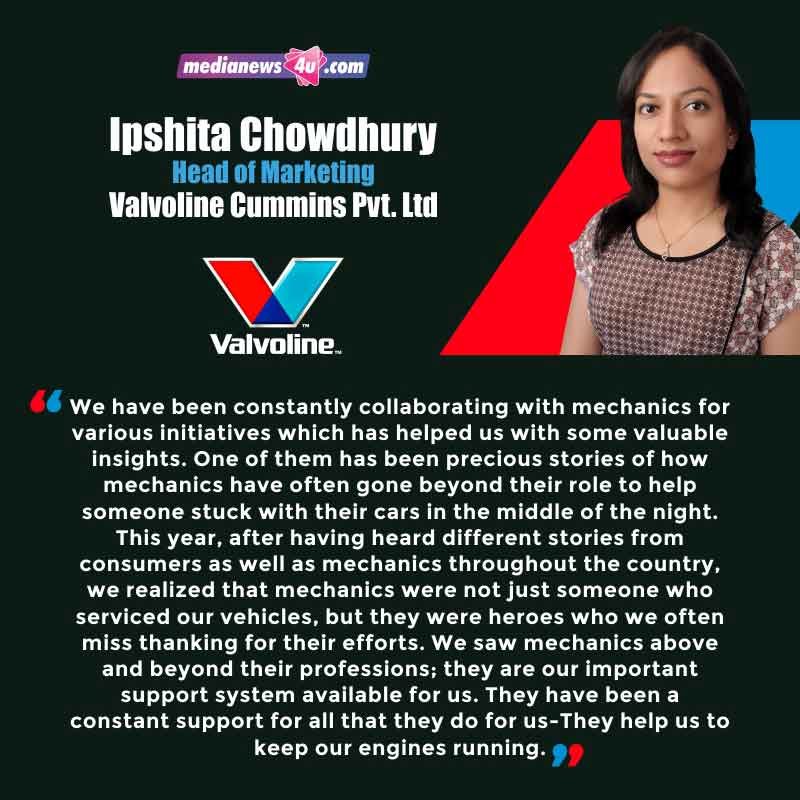 As part of the Maha-Mechanic Month 2022 campaign themed -‘keeping the world moving forward’, we are reaching out to mechanics pan India, wherein our teams would be meeting and thanking them face to face. Our main objective of this year’s campaign is to reach each and every mechanic across India and thank them for their zeal and commitment to help people and us moving forward.

The marketing strategy for this campaign?

We are amplifying our Maha Mechanic Month 2022 campaign by various methods- an integrated campaign across digital, on ground and Radio Mirchi- a widely heard radio channel along with influencer marketing campaign.

This campaign has also been activated across the world, the thought behind this?

Valvoline has a legacy of above 150 years and believes in adding to their legacy constantly with new ideas and innovations. This campaign has been activated in different countries, keeping in mind how mechanics from around the world have been working day and night to help us move forward. 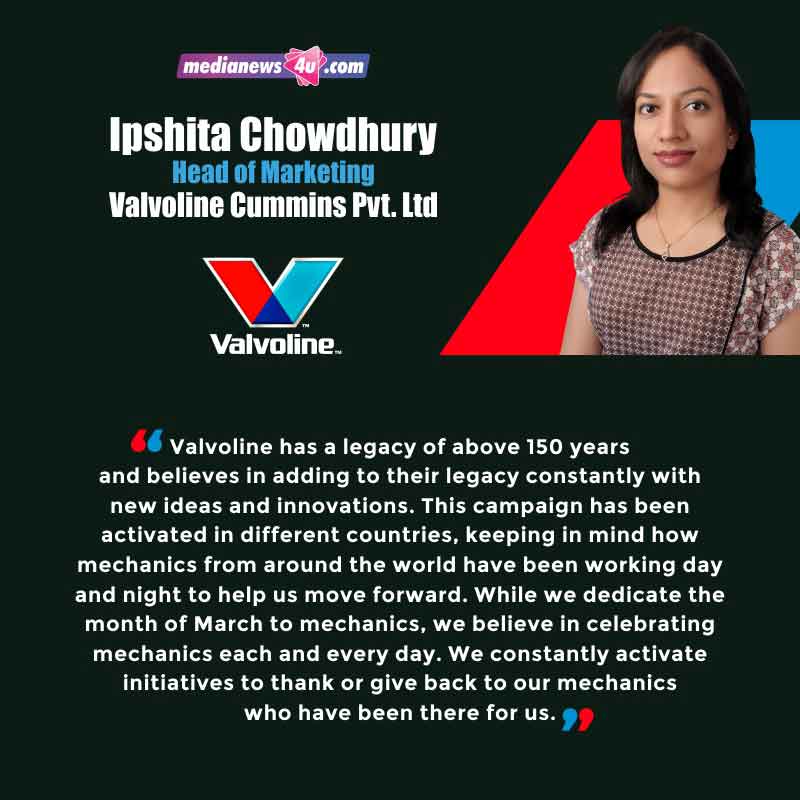 While we dedicate the month of March to mechanics, we believe in celebrating mechanics each and every day. We constantly activate initiatives to thank or give back to our mechanics who have been there for us. This global campaign aims to create awareness of the efforts and sacrifices made by mechanics who are there at our service regardless of what time it is or where we are.

According to Chrome Data Analytics and Media data for week-20, 2022, English News genre became the top gainers of the...