by Editorial
in Television
2 min read

Hyderabad: Zee Telugu gears up to celebrate the biggest festival of the year in grandeur and in style! The channel welcomes the festive season with ‘Vijayadashami – Prathi Roju Pandage’ on 29th September at 2:00 PM.

‘Vijayadashami – Prathi Roju Pandage’ will be a grand affair with television celebrities in their celebratory best – dressed in festive finery, dancing to superbly choreographed performances, on the grandest sets ever. All the members of Zee Kutumbam such as Siddhu, Pranavi Manukonda from ‘Ganga Manga’, VJ Sunny , Meghna Lokesh and Bhavana from ‘Kalyana Vaibogame’, Marina Abraham and Nirupam Paritala from ‘Prema’, Siddharth Varma and Jyothi from ‘Raktha Sambandham’, Akarsh Byramudi from ‘Attarintlo Akka Chellalu’, Abhi Pratap and Madhubala from ‘Ninne Pelladatha’ and many other popular faces like Yamini, Karuna Bhushan, Suhasini, Sudheer, Ram Prasad and Seenu will make their presence felt. 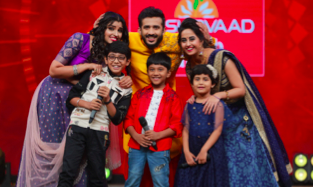 There is a surprise element in the show with the Tollywood actress Nabha Natesh, who making a special appearance. She will not only be seen dancing to the tunes of her latest movie, ‘Ismart Shakar’, but also joining the festivity with Zee Kutumbam. Additionally, there is a splendid act by Nirupam, Abhi, VJ Sunny, Anchor Ravi, Akarsh, Siddharth Varma and Siddhu where they try to woo the ravishing Nabha.

Anchor Ravi, Shyamala and Sameeksha get ready to tickle some bones with their ‘dance comedy’ grooving to some hit Tollywood numbers. There is a special dance performance by Shiva Parvati, Uma, Chaitra Rao, Sheela Singh, Bhavana, Usha Rani, Brundha, Madhavi Latha and Jyoti Reddy on Nava Durga. To ensure that there is more than a generous dose of entertainment, Pooja Moorthy will be seen performing a classical dance act, and Sa Re Ga Ma Pa Lil’ Champs, Mangli and Dhanunjay will be singing melodies, adding to the festive fervor.

Central Govt asks mainstream media to comply with IT Rules, refuses to exempt

The central government has refused to exempt the digital news content of mainstream television channels and print media from the...

NBF Members Abide by the New IT Rules 2021

New Delhi: News Broadcasters Federation, the largest industry organization of news broadcasters has announced that all of its current and...

Colive will be the most loved brand in the Coliving space with a deep understanding of the customer requirements: Suresh Rangarajan, Colive

The launch of the Tata Sky Binge Mobile app is in sync with our endeavour towards making our products available to a larger stratum of the audience: Pallavi Puri, Tata Sky

Something happened on 24th May; A cue for the India ahead story

We help brands work with the right influencers to help the brands achieve their goals: Pratik Gour, Footprynt