84% mobile users in India use the internet for Entertainment: MMA-GroupM report

There’s been a significant rise in the number of individuals accessing the internet through their phones and today this number has grown to 99%. The mobile device has become a central part of our connected lives – right from controlling features in a car, streaming TV, connecting with friends on social media, to on-the-go entertainment.

The Mobile Marketing Association India has collaborated with WPP Agency – GroupM, for a report that focuses on the depth of insight that can be gained when a trade association and an agency come together. Based on combined learnings, local expertise and market insights, this report looks deeper into where mobile marketing stands today, what has led us here and what the future holds.

A lot is changing in the world of mobile, and with the increase in internet usage on the go, everything from subscriptions to the time spent on mobile is rising fast. Social media platforms are created with mobile as a platform in mind, and OTT providers have subscription plans and UI/UX strategies with mobile usage at the centre.

According to the recent report launched by MMA and GroupM, in 2018, Asia-Pacific represents the largest number of internet users, with 53% of the global share, and 48% internet penetration in the region. The most interesting aspect of these numbers is that the Asia-Pacific region also shows the highest potential for further internet growth.

A developed region like North America has 89% internet penetration. Therefore, as Asia-Pacific moves towards further development, the internet users are bound to grow manifold. 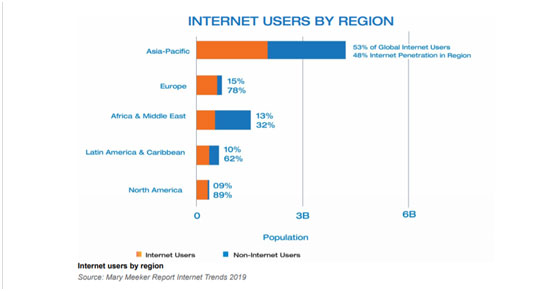 From the desktop to the laptop, tablet, and finally the mobile – the internet has become accessible on more and more devices alongside the consumer embracing new gadgets. Currently, across both rural and urban areas in India, 99% of users are using the internet on their mobile phones.

The fact that along with cheaper data plans, smartphones have also become more affordable, allowing wider access. However, with connectivity and service quality still not at optimum levels in rural areas, on-the-go use for everyone is not yet possible, meaning that the number of people using the internet while traveling is still low.

The report states that globally, more than 5 billion people use mobile phones, an increase of 2.5% as compared to the previous year. Out of a population of 1.3-1.4 billion, India has 1.16 billion mobile subscribers, comprising 700 million unique mobile subscribers. The growth has been gradual in the past few years, mainly fostered by an increase in consumer spending and entry of low-cost handsets, like JIO phone. With the increase in the number of mobile phones, the time spent on mobile also grew to 3.7 hours per day which is a 25% jump as compared to 2017 data.

The global smartphone devices are estimated to be around 3.8 billion, while China has the most number of active smartphone users, India stands at 2nd position with 502 million smartphone users. Compared to 2018, the user base has increased by 15% and it is estimated to reach the 650 million – 700 million mark by 2023.

In 2019, consumers downloaded a record of 204 billion apps worldwide, spending close to $120 billion which is 2x of 2016 spending. This growth was mainly fueled by emerging markets such as Brazil, India and Indonesia. While the global growth in app downloads has been 45% in last the three years, India witnessed a mindboggling growth of 190% since 2016 reaching around 40 billion app downloads by 2019.

Among all active mobile internet users in India, which stands at approximately 451 million, entertainment is the purpose for a whopping 84%. This is followed closely by communication at 79% and the use of social media at 67%. Net commerce and online shopping fall quite far behind in numbers at 40% and 23% respectively. This clearly indicates the need for digital video and OTT platforms to continue making the interface mobile-friendly, thereby ensuring a wide reach to all those actively consuming content on the go. 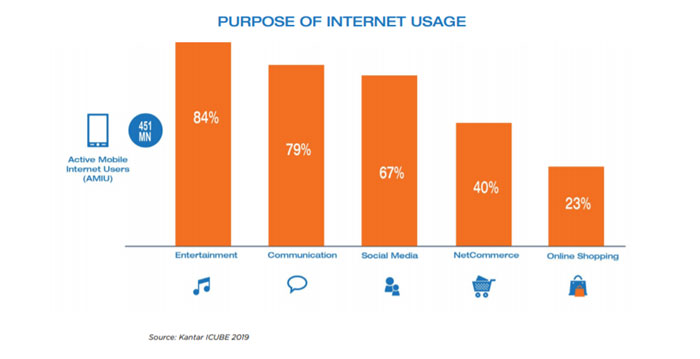