Recently TAM AdEx has released its report on advertising by auto sector, the report highlighted Ad volume growth, increase in new brand in Tv, print, radio, and Ad growth between July to September. If we compare the report of July to sept from Apr to Jun then there are more than 95 new brands on television, 2600 brands in print and 165 brands on radio.

On TV Top 3 channel genres together added 85% share of Auto ad volumes whereas there were increase in 57% in ads on Hindi and English Publications for auto sector. Also, Prime Time, Afternoon, & Morning time bands together added 73% share of ad volumes. 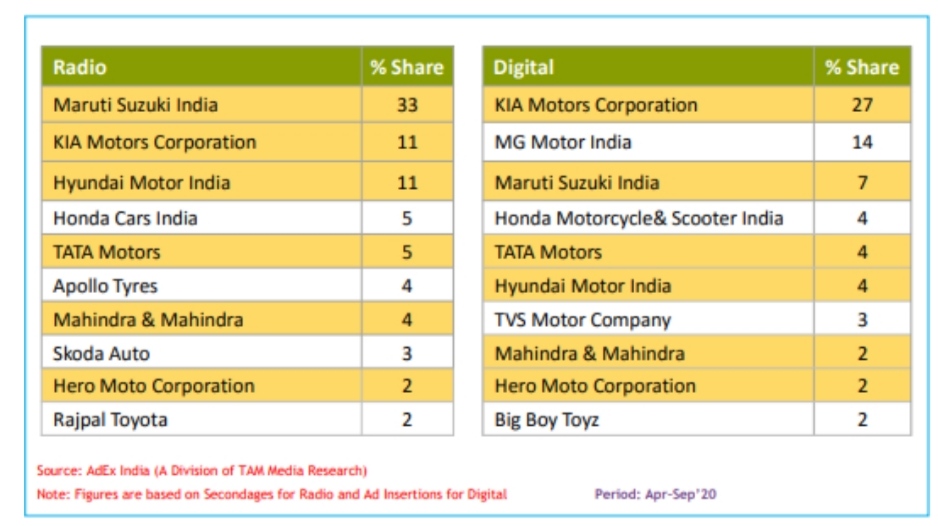 During these three months of time Top 10 advertisers added more than 70% share of ad volumes on traditional mediums. While on Radio, Top 10 advertisers had 81% share of ad insertion. KIA Motors, Maruti Suzuki, Tata Motors, Hyundai Motor India and Hero Moto Corporation were the common advertisers across all mediums. While, Cars category accounted more than 70% of the ad volume share of Auto Sector on TV and Radio mediums, whereas there were 58% & 65% of the ad volume share in Print & Digital mediums. Also, 55% of growth in Ad volume was contributed by Top 4 states which were Gujarat, Maharashtra, Andhra Pradesh, Madhya Pradesh.

If we analyse the report from the earlier months of the lockdown, we saw that there were increase in Auto sector in all the four mediums of media be it Tv, print, radio or digital. Also, the advertisers have increased their ad volume for their brand promotions.

Bengaluru: To celebrate the spirit of womanhood, on the occasion of International Women’s Day, The Himalaya Drug Company, one of...