Can BARC India bury the cases of manipulation, has anything changed now..?

by Editorial
in Television
2 min read

The Purported WhatsApp chats of Partho Dasgupta, the former CEO of TV ratings measurement agency BARC India submitted in court by the Mumbai police as part of its investigation into the TRP scam revealed the fact that it was run by few former executives according to their whims and fancies. Moreover, the Forensic analysis submitted by The Acquisory Risk Consulting (ARCP) also found incriminating evidence against many former Leadership of BARC India, exposing their involvement in manipulating of the viewership ratings. Now that they all are out of the system, the industry was pinning hopes on the new management headed by the CEO Sunil Lulla to run a flawless show.

However, some of the WhatsApp chats between Partho Dasgupta, the former CEO of TV ratings measurement agency BARC India and its former COO Romil Ramgarhia raised a serious concern on the functioning of new management of BARC India too, exposing lack of transparency in its operations.

According to Newslaundry portal, the conversation between the former CEO and COO before and after the exit of Partho Dasgupta from BARC India reveals the possibility of BARC India’s new management opting to ignore the videos of proof of tampering against the Hindi News channel mentioned in the above mentioned chats, which was gathered by the previous management.

In June 2019, when Dasgupta was heading BARC India, he and Ramgarhia acquired evidence to prove that a particular Hindi News Channel was tampering with household data chats reveal that they were progressing towards the same. 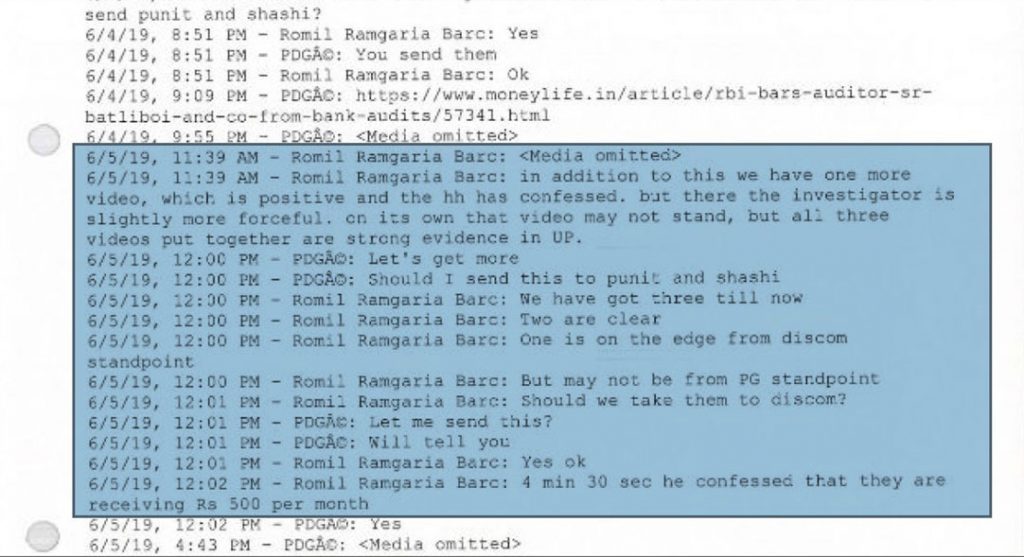 After Dasgupta had quit BARC in October 2019, he and Ramgarhia who could be seen chatting on September 2020 in which they discuss on what had happened to that video evidence.

In September 2, 2020, Dasgupta asks, “Is there any proof where India TV was caught but Rajat terrorized Sunil?”

In response, Ramgarhia said, “I will not have it and I am not remembering this incident,” “Let me try and recollect.”

Dasgupta asks: “You told me on phone”

Ramgarhia responds: “Hmm. There was proof with vigilance but was buried by Varun,” “Because SL told him to. You can say vigilance is being run like mom n pop and favoring few.”

In the above conversation Romil Ramgarhia informs Dasgupta, the fact that the vigilance department has buried the evidence of tampering against a particular Hindi News Channel which was gathered by them.

When Newslaundry portal contacted BARC India for its response, the rating agency excused itself from responding to their query citing that the matter is a subject of an ongoing investigation by the various law enforcement agencies.

If the above chats are to believed in addition to the fact that the new management of BARC India remained silent on Forensic analysis report submitted by ARCP in July 2020 until Mumbai Police stumbled upon the same, raises questions on whether the new management of the measurement agency was just trying to clean-up the system within the organisation while trying to ignore the cases of tampering and malpractices happened during the past, which were highlighted in the forensic report by ARCP.

The industry and stakeholders are still hoping that those who involved in tampering needs to be booked and justice delivered to those who were innocent.

New Delhi: As the West Bengal electorate prepare to elect the state’s next government, News18 India has announced an array...