New Delhi: Hindu Tamil Thisai, the Tamil Language Newspaper, published by KSL Media Limited, a part of The Hindu Group was awarded the National Media Award by the Central Election Commission of India for carrying outstanding campaigns on Voter Awareness & Education during the year 2019. 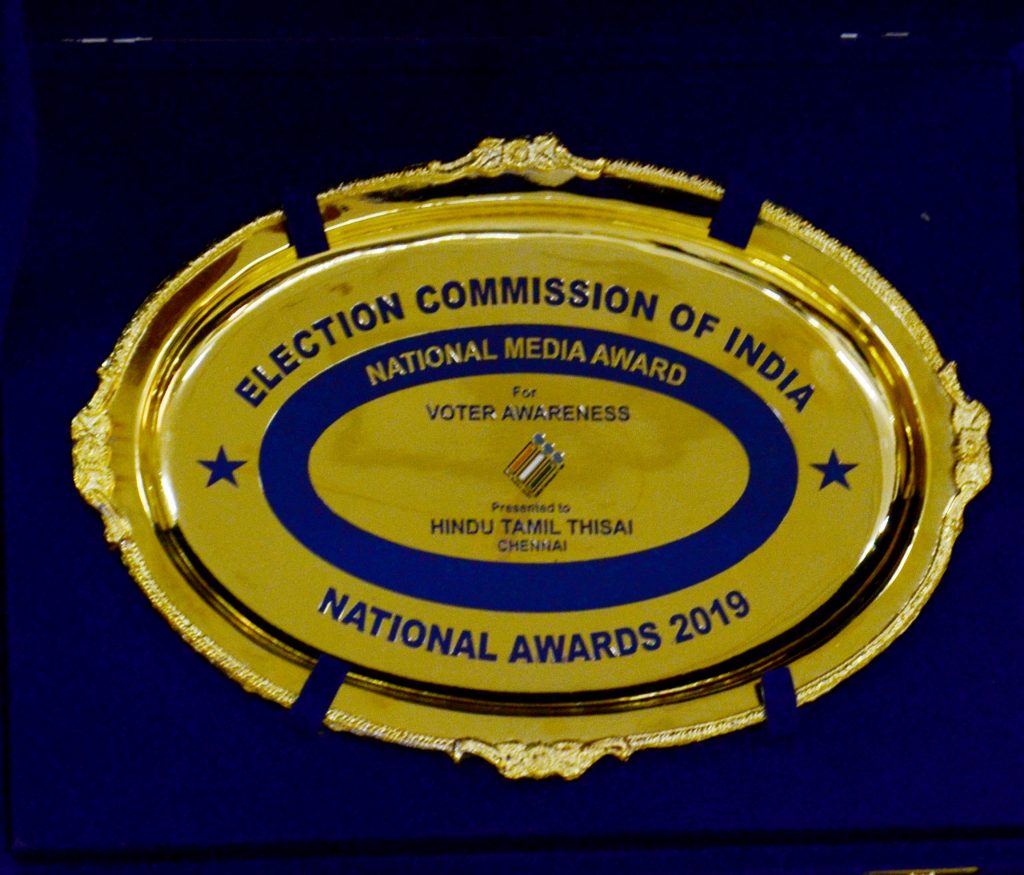 It is the first Tamil publication & only publication across the country to have received this award, for the Print Media Category, from the Election Commission of India, for the year 2019.  The campaign was to sensitize the Voters of Tamil Nadu on the importance of Informed and Ethical Voting for Stronger Democracy, during the Lok Sabha election 2019.

The Award was handed over by the Hon’ble President of India & Hon’ble Minister of Law & Justice on the 10th National Voters’ Day on 25th January 2020, at New Delhi.

Shankar V Subramaniam,  Business Head, said, As part of our social responsibility, Hindu Tamil Thisai had initiated this program – Num Vakku – Num Kadamai (Translation: Our Vote – Our Duty), to sensitize the Voters of Tamil Nadu on their need to exercise their franchise, in the General Elections that were held in 2019. We associated with the Election Commission of Tamil Nadu in this Voter Awareness Program across TN.  The campaign included a detailed report on the 40 Lok Sabha Constituencies in TN & Pondy, series of ads in Hindu Tamil Thisai, with creatives Urging the Voters to go out and vote on the election date, Not to sell their Vote for Money, etc. This campaign transcended beyond Print on to the Digital platform of Hindu Tamil Thisai.

We also executed a Voter outreach program by conducting On-ground meetings at College Campuses in Cities like Tiruvannamalai, Coimbatore, Tirunelveli & Kanchipuram targeting the First Time Voters. Highly placed Government officials, of the rank of District Collectors, addressed the gathering at colleges.  We had a likeminded client like Shankar IAS Academy being a part of this campaign of ours.

On receiving this award, Asokan K, Editor – Hindu Tamil Thisai commented, “We, the 7 years old Hindu Tamil Thisai Daily team sincerely believe that the important role of journalism is to infuse positive thoughts and create constructive awareness among the readers at large. Attracting readers through a sensational news approach can only be a short time success but that won’t bring any change or improvement in society. As an offspring from the 140 years’ The Hindu Group, we naturally took the positive route which has reflected in our Election Awareness Campaign also. He added that this was one successful joint mission by Editorial, Advertisement and circulation depts”.