From Newspaper to TV to Digital, the path I’ve taken has been wonderful with its own set of challenges: Aradhana Bhola, Fremantle India

This Women’s day, MediaNews4U.Com is acknowledging women leaders of the Media, Marketing, Broadcast and Advertising fraternity who have given more than expected.

Since its foray into India in 2009, Fremantle India Television Productions Pvt. Ltd. has consistently ranked amongst the leading production companies in Television

Fremantle’s success in India has been across genres and includes productions of hugely successful international formats such as Indian Idol (Sony) and India’s Got Talent (Colors), which have been produced for multiple seasons. We are the proud producers of the TED Talks India, a thought-provoking TV series arising out of collaboration between Star and TED. Our foray in the rapidly growing OTT/SVOD space has resulted in us producing our hugely successful format Hear Me Love Me See Me for Amazon Prime Video and partnering with Facebook Watch for their first original production in India, Confetti.

In this segment, Aradhana Bhola – MD – Fremantle India shares her experiences and breaking the gender stereotypes and how she continues to inspire many other women who are true leaders in the making.

So far, I’d say it has been exciting, challenging & fulfilling.  I have been very fortunate to be living through these challenging and changing times. From writing for leading newspapers and magazines to getting into the electronic world through news and subsequently finding my groove in creating content for TV viewers and now digital consumers, the path I’ve taken has been wonderful but not without its own set of challenges. 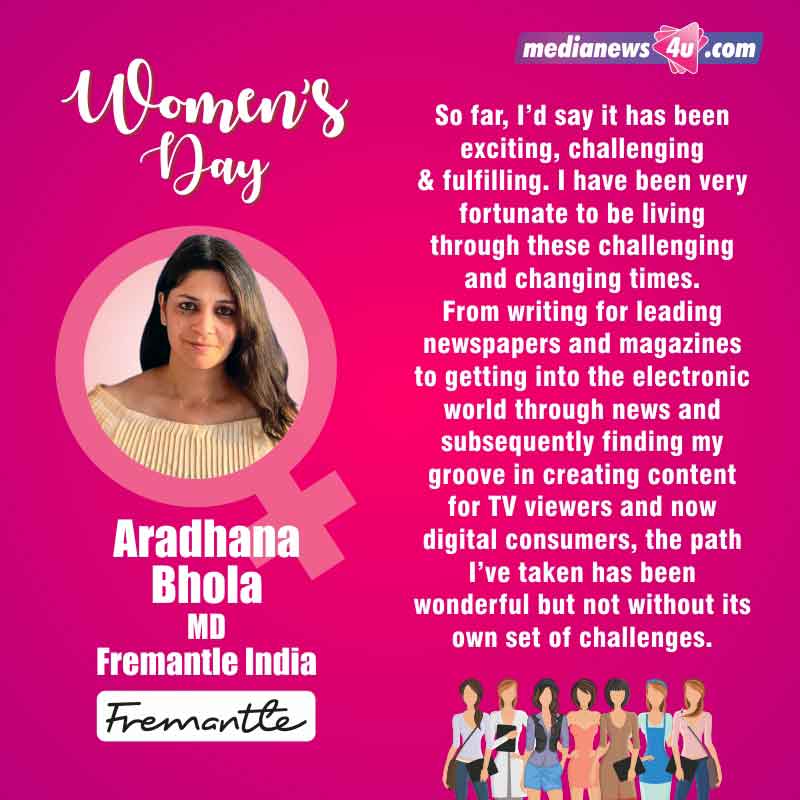 For instance, I remember when we were creating the first season of Indian Idol in 2004, there was no precedent for that kind of reality talent hunt in the country. To explain what one means by say, the back story of a contestant, itself took multiple rounds. Today, it is at par for the course in any reality show. The highlight of telling stories for me has been to see the larger impact on the individual/s and society at large. I remember during the initial seasons of India’s Got Talent, contestants would come to audition without telling family members as they were expected to pursue more ‘serious’ things in life. Today, it’s amazing to see supportive parents cheering for their children from the wings. It makes my heart swell with joy and pride knowing that our work has played a small but significant role in bringing about this change in attitude.

Also, people often think that as content creators, we are the ones empowering other people as we bring their stories into the limelight. The truth is, the human spirit that we encounter with all its magnificent facets and its many  vulnerabilities, touches our lives first and inspires us to make the world a better place, story by story

There are a lot of ‘who’s’ and a lot of ‘what’s’ in terms of inspiration in my life. This list keeps getting longer as time passes by. Be it my grandmother who continued to study after she got married and went on to be a college professor; my mother who struck a fine balance between her work and home life (as a child I thought she had magical powers, as a working mother today, I know that the secret sauce lies in caring to walk the extra mile); my father who introduced me to music as varied as Mozart, Michael Jackson and Mirza Galib; my aunt whom I lost to the pandemic yet her gifted creativity continues to inspire me to this day; my partner whom I was lucky enough to find in school and who still makes me laugh; my children who are also my teachers in a lot of ways, they introduced me to social media; friends who have stuck by me while holding a mirror to my face every now and then; colleagues, I particularly remember my former boss Kamini Sahwney at NDTV who called me in when I was a rookie and said, “I’m giving you our best cameraman. Here’s the address. Just go and shoot your first story”; the super secure Sanjiv Sharma who at Optimystix told me, “Your job is to make mine redundant”; and my current boss, Jennifer Mullin who called me when the pandemic broke out and said, “Do whatever it takes to keep your people secure – I’ve got your back” — these are the people who’ve touched my life deeply. I also take inspiration from books, films, pieces of art & poetry, places I have travelled to across the globe and the people I have met…. last but not the least, Nature itself. Like I said, my list of inspirations is a WIP and I hope that by continuing to bring my authentic and attentive creative self to work every day, I in turn, inspire my team members too. 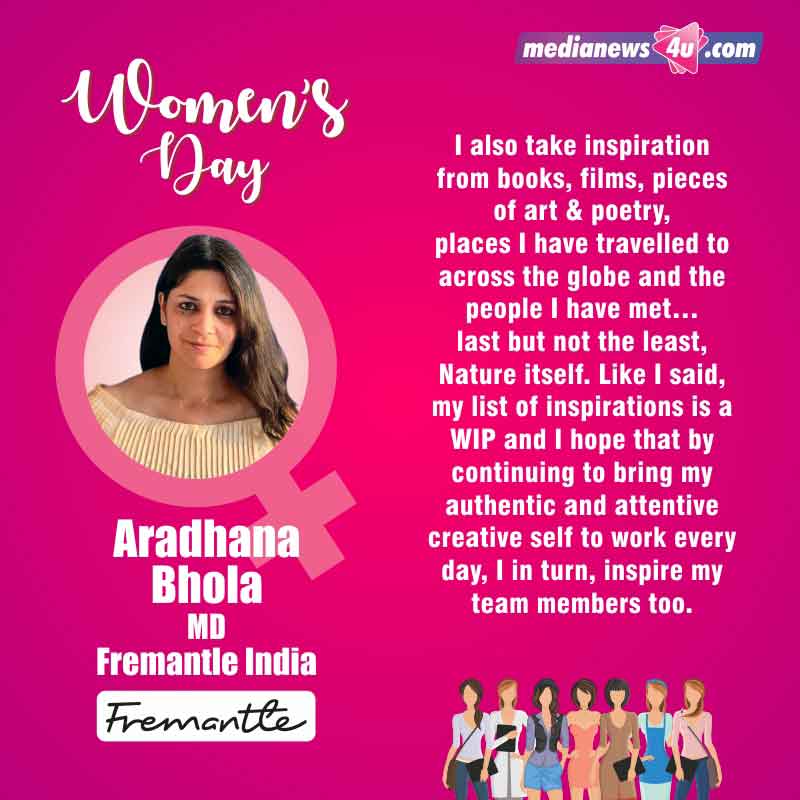 I remember reading Maya Angelou’s volume of poetry, And Still I Rise, and feeling that it truly embodies female empowerment. It was written in the ‘70s and in someways, we have come a long way; in others, we still have a long way to go. Here’s my favourite stanza from her poem:

“Does my sassiness upset you?

Why are you beset with gloom?

Pumping in my living room.

With the certainty of tides,