According to the TV viewership data released for week 12 by BARC, the Hindi Movies channels have seen immense growth mainly because of the countrywide lockdown. This growth is both in average impressions and reach, that too on a week-on-week basis. Our comparison of the past four weeks data shows the growth in the genre.

The average impressions in million for Hindi Movie channels across the Hindi speaking markets has been tremendous, Star Gold has seen a 113% growth from week 9 to week 12. This sort of growth has been witnessed by other channels such as Colors Cineplex which from Week 11 to Week 12 has grown by 102 Mn impressions; its week 12 over week 9 growth is a 78% increase. The Average weekly reach of Hindi Movie Channels too has seen an impressive growth over a week-on-week basis, Zee Anmol Cinema and Star Gold Select have seen similar increase in reach of 36% over a period of four weeks from week 09 to week 12 of 2020. Wow Cinema One too which from Week 11 to Week 12 has grown by 17 Mn impressions; its week 12 over week 9 growth is a 47% increase. 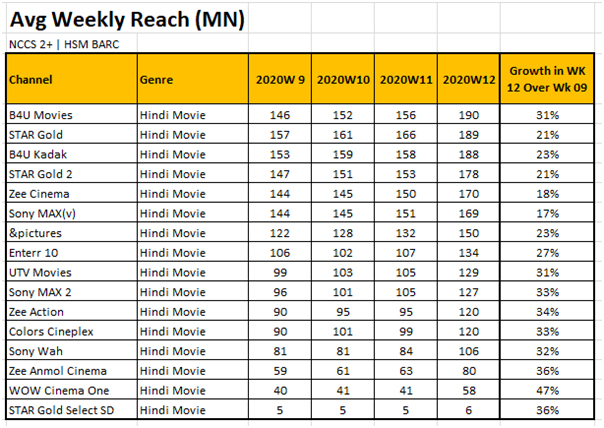 Cellular Phones-Smart Phones continue to be the top category advertising during the first 4 IPL matches in 2020: TAM Sports-13 Advertising Report

The TAM Sports-IPL 13 Advertising Report covers the advertising during IPL 13 and IPL 12. It features the count of...

Mumbai: RSH Global, a leading Indian skincare company today announced that it has appointed Madison Media as the Media Agency of...

There is no playbook for marketing an IPO: Prabhakar Tiwari, CMO, Angel Broking

Brands may bet on Drive-in theatres in India: Experts

As I say, think horses for courses, we have to ensure content is made available to audiences everywhere: Pradeep Dwivedi, Eros International

Mumbai: The pace of lifestyle changes in the recent past has been unprecedented. ITC Savlon has been at the forefront...