Mumbai: On Wednesday the Indian air force demanded to cut few scenes from a soon to be released Netflix movie AK vs Ak after the trailer which was shared on twitter by the actor Anil Kapoor. They said in a teaser for the movie, the actor is seen using foul language and dancing drunk on stage while wearing the Indian Air Force uniform.

“The IAF uniform in this video is inaccurately donned & the language used is inappropriate,” the IAF said in a tweet, attaching a teaser of the film. “This does not conform to the behavioural norms of those in the Armed Forces of India. The related scenes need to be withdrawn.” The IAF tagged streaming service platform Netflix and director Anurag Kashyap as well, who also plays a role in the film.

Also, On Wednesday evening, Netflix released a statement saying that the scenes were not intended to be disrespectful towards the country’s armed forces. “Our intention would never be to disrespect the Armed Forces of India in any regard,” 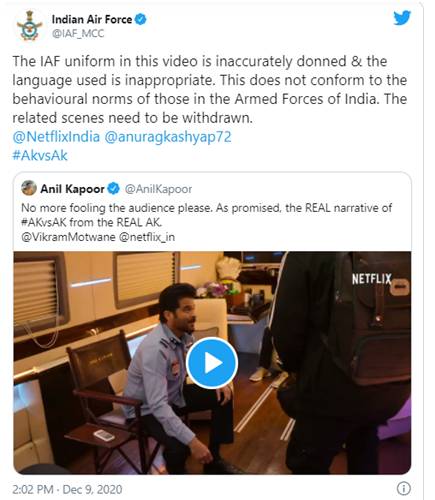 Kapoor also released a video statement on Twitter apologising for offending sentiments. “It has come to my attention that the trailer of my new film AK vs AK has offended some people as I am wearing the Indian Air while using unparliamentary language,” the actor said. “I would like to sincerely offer my humble apologies for unintentionally hurting anyone’s sentiments.”