Who doesn’t enjoy music? It plays an essential role in our day-to-day lives, whether we are travelling to work or when you are doing your household chores. Listening to music could simply be an ingrained habit; it could be our “go-to medicine” when anxious or stressed.

Like every year, FICCI and EY have released their flagship M&E report that is a deep-dive into the performance and growth charters of the entire industry.

According to the report, the Indian Music segment grew 8.3% to reach INR15.3 billion in 2019 and is expected to grow at a CAGR of 10% to cross INR20 billion by 2022, on the back of increasing digital revenues and performance rights.

India’s average of 19.1 hours a week is higher than the rest of the world which is 18 hours a week. As per the reports, Audio streaming comprised 39% of the time spent listening to music (video, audio and radio). Consumers in India preferred to visually engage with music, with time spent on video streaming services accounting for 28% of total time spent (i.e., 5.3 hours/ week, compared to global average of 3.5 hours/ week).

Smartphone the device of choice for listening music

Smart technology has completely changed the way in which we listen to music, once upon a time we used to wait for our favorite artists to release their music CDs – but we now have more access than ever before to stream music online.

One of the major highlight in today’s day and time is that we can listen to pretty much anything, from anywhere, due to the increase in dedicated music subscriptions services, which all offer a massive library of music to the end user. Big names such as Spotify, Apple Music and Amazon music and many more.

Bollywood is known for its music; with the incorporating performances of acting, singing, and dancing.  New Bollywood music which was released over the last 12-18 months was consumed by 60% of users. 53% of users listened to vintage Bollywood songs while the other top categories were regional music in Tamil,Telugu and Bengali languages. 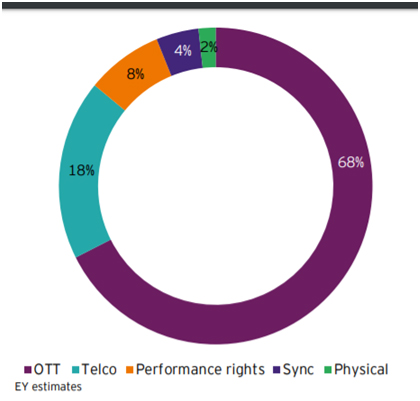 In 2019, growth on streaming platforms was driven by a 20% increase in broadband penetration, a smartphone base which grew to 395 million and a significant conversion of 2G and 3G connections to 4G. Video streaming grew 37% on the back of several successful Bollywood and regional films as well as a push for independent music. However, less than two million listeners paid for music.