Commenting on the successful culmination of season 5 of City Cine Awards Marathi, Kartik Kalla, Chief Creative Officer, Radio City said, “With a strong presence in Maharashtra, Radio City truly believes in applauding and supporting the innate talent of the Marathi film industry. We are truly obligedwith the response received from the audience who voted generously for their favorite talent in the fifth season of City Cine Awards Marathi., From the entire team of Radio City, I would like to congratulate all the winners as well as the nominees for bringing the best of entertainment available to the audience. As an endeavor to support and boost the entertainment industry, we will continue launching credible awards across categories.”

Sharing her gratitude for bagging the Best Actress award, Sonalee Kulkarni said, “I am extremely joyful as our movie Jhimma bagged six awards at Radio City Cine Awards Marathi. Additionally, I was voted as the best actress for my role in the movie Pandu by the most amazing audience. I would like to heartily thank all those who continue to shower us with their love and support. A huge thank you to the Radio City team for recognizing the talent of Marathi movie industry. I feel truly honored and elated as this is my third year of winning this award, chosen by the public. I request you all to continue showing us your love and encouragement, as we are in this position to entertain owing to your support.”

Season 5 of Radio City Cine Awards Marathi was amplified across 10 stations in Maharashtra. 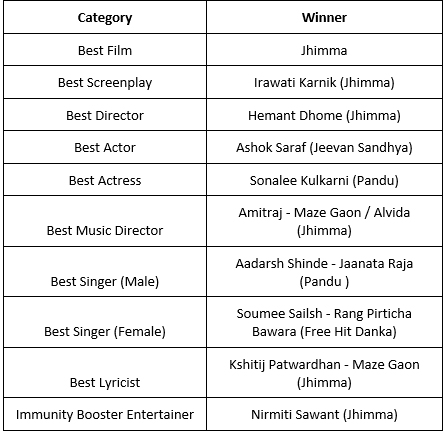