Republic Media Network successfully organized the first edition of the ‘India Economic Summit 2021’. The one-of-a-kind economic event put the spotlight on contemporary economic issues with the best minds across the nation and the world.

The uniquely timed ‘India Economic Summit 2021’ took place on the back of India rebounding from the pandemic with stellar projections. As the RBI as well as the IMF, estimate the Indian GDP to grow 9.5%  making it the fastest-growing economy in the world, the Summit was a platform to ideate on the trajectory ahead.  Answering pertinent economic questions, the Republic Media Network’s ‘India Economic Summit 2021’ held on the 26th of November at the Taj Palace, New Delhi was a roaring success. It was a testament to India as a nation  All Geared Up to be a superpower.

The Summit hosted by the inimitable Rini Simon Khanna, kicked off on an optimistic note by the network’s Editor-in-Chief, Mr. Arnab Goswami, who stated, “We must not be the marketplace of the world. We must be the hub of production, the hub of digitisation, the hub of technology, the hub of risk-takers, and the hub of innovation.”  Union Ministers, policymakers, corporate honchos, and business leaders convened, collaborated, and captivated the country’s collective attention with a discourse that made India’s economic prowess the prime focus. India’s growth story and its role in shaping the new global world order was the focal point and key issues that needed attention were addressed. 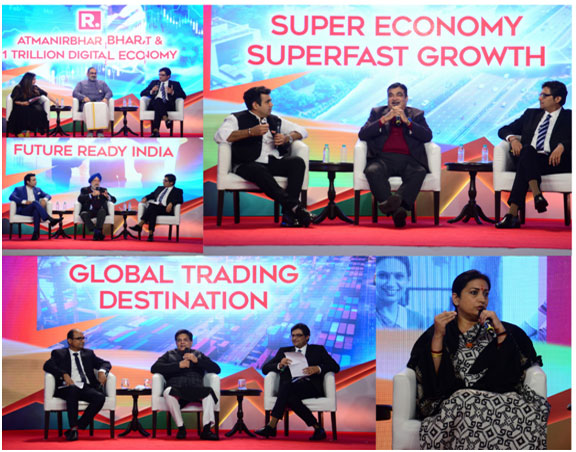 The day-long summit encapsulated all issues relevant to the Indian economy and was pivotal in engaging and enlightening the viewers on the new economic order. In addition to conversations with Union ministers, the Summit was a platform where leading business personalities like Marico’s, Mr. Harsh Mariwala, and Bharat Biotech’s Dr. Krishna. M Ella put forth their opinions on the Indian economy. While Mr. Mariwala egged the start-up generation and millennial India to get in the game, Dr. Ella highlighted the need for India to have a robust health infrastructure and become the world’s preferred manufacturing hub.

In addition to this, there were 5 panels where India Inc, economists,  top corporate leaders, and the country’s movers and shakers engaged with each other on pressing economic topics.

At the India Economic Summit, Union Minister Shri Gadkari stated, “India’s 2,3 and 4- Wheelers will be flex engines with electricity within 6 months and the costs will be significantly low”. Union MinisterSmt. Smriti Irani while championing the Indian women growth story added “It is essential for a woman to not only have a salary cheque, but for her to have control over her own money”

In what was one of the biggest highlights of the event, was top global economist and Professor of Economics, New York University’s Stern School of Business, Dr. Nouriel Roubini. He joined virtually from New York, to speak on ‘India’s Role in the Global Economy’. A man known to the Nostradamus of financial crises gave his list of positives for the country’s financial future, and these clearly outweighed the concerns. His views coupled with the favourable projections undoubtedly prove that India has set the ground running to reach insurmountable heights.

Commenting on the success of the Summit, Arnab Goswami, Editor-in-Chief, Republic Media Network, said “the massive success and gripping ideation sessions at The India Economic Summit 2021 prove beyond doubt that India’s economy is all geared up for greatness. The first edition of the Summit has infused audiences across the world with confidence that India is a superpower in the making. And it gives me great joy that amidst it all, Republic is poised to lead and expand into new horizons with a massive digital operation.”

Star Plus extends its fiction shows to seven days a week

Star Plus, Hindi GEC channel, set to telecast its fiction shows on all seven days of the week starting 2nd...