In just about a year of launch, Rizzle app has garnered over 10 million users across India and USA. Rizzle is creator-focused because it encourages original content creation with the Rizzle camera, thereby showcasing the talents of the short video creators. Rizzle has the best user interface and user experience among all the short-video apps from India.

Rizzle races ahead of its competition in terms of having one of the most advanced personalized feed algorithms to show the best channels and creators to all users to optimize their short-video watching experience.

Vidya Narayanan, CEO, Rizzle spoke exclusively to Medianews4u about the app’s success and how it differentiates from the ocean of short-video platforms in the country.

Tell us about Rizzle? How and when did you start?

Rizzle birthed from an idea that video platforms have historically been a kind of one-way thing: you put out a video and the community watching it may send you comments, but there was no way to have a discussion at scale, example Reddit. And if you’re doing an Instagram Live, for example, one or two people are talking and the rest are writing comments in real-time, the scope for response reduces even more with an increase in viewers. We recognized this gap in the market. There was no community for video interactions anywhere. And so we set out to bring video discussions into the hands of thousands of people.

That was the fundamental premise. And from there we introduced channels and episodic content to allow creators to compartmentalize their content.  So now one can see creators have a response channel, for example, where they respond to random people’s questions or a movie review channel. They’re doing five or six or ten different channels.  And from there, we built a binge-watching feed

What’s different about Rizzle that other various short video making applications don’t have?

We have carved a niche in the vertical short videos and vertical-series space under the banner – RSeries. This we could achieve in a very short span of time. It has also proven to be instrumental in providing a creative environment to all kinds of digital content creators. Rizzle App is much appreciated for its compelling features and also its foray into the otherwise untouched vertical-series space. With Rizzle, Indian short video users can watch interesting short vertical-series on their smartphones.

Another thing that elevates Rizzle apart from the other short video apps, is the video-to-video response. On Rizzle, one can only respond to the fellow creators via videos, while most of the other platforms allow chats and comments. This leads us to create a positive, uplifting entertainment space. 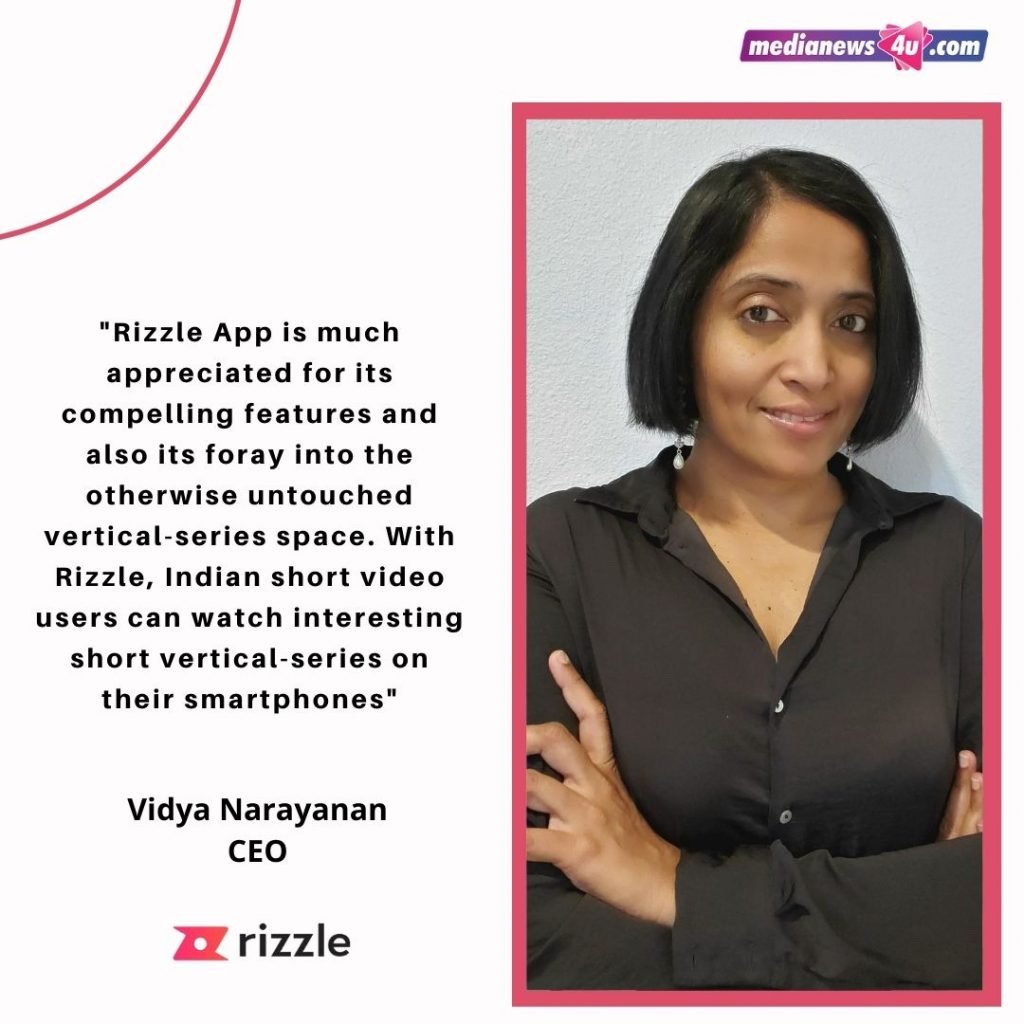 What is your vision and mission for Rizzle?

Rizzle’s aim is to transcend the face of vertical short video space. As a 60-seconds original content app, Rizzle acts as a portfolio for all the talented and budding content creators where they can showcase their talent along with learning and honing their skills. If you look at our RStudios, we are hosting free dance and acting workshops for anyone who wants to learn. We are constantly looking to add value to creators. Millions of people in India dream of being stars – Rizzle Studios will help them realize their dreams. Whether it is grooving to music as a hobby or taking the first steps to becoming a professional actor, we welcome people to join RStudios and be the star they can be. The whole idea is to give a platform to all such content creators on which they can showcase their talent to an ocean of consumers/viewers. 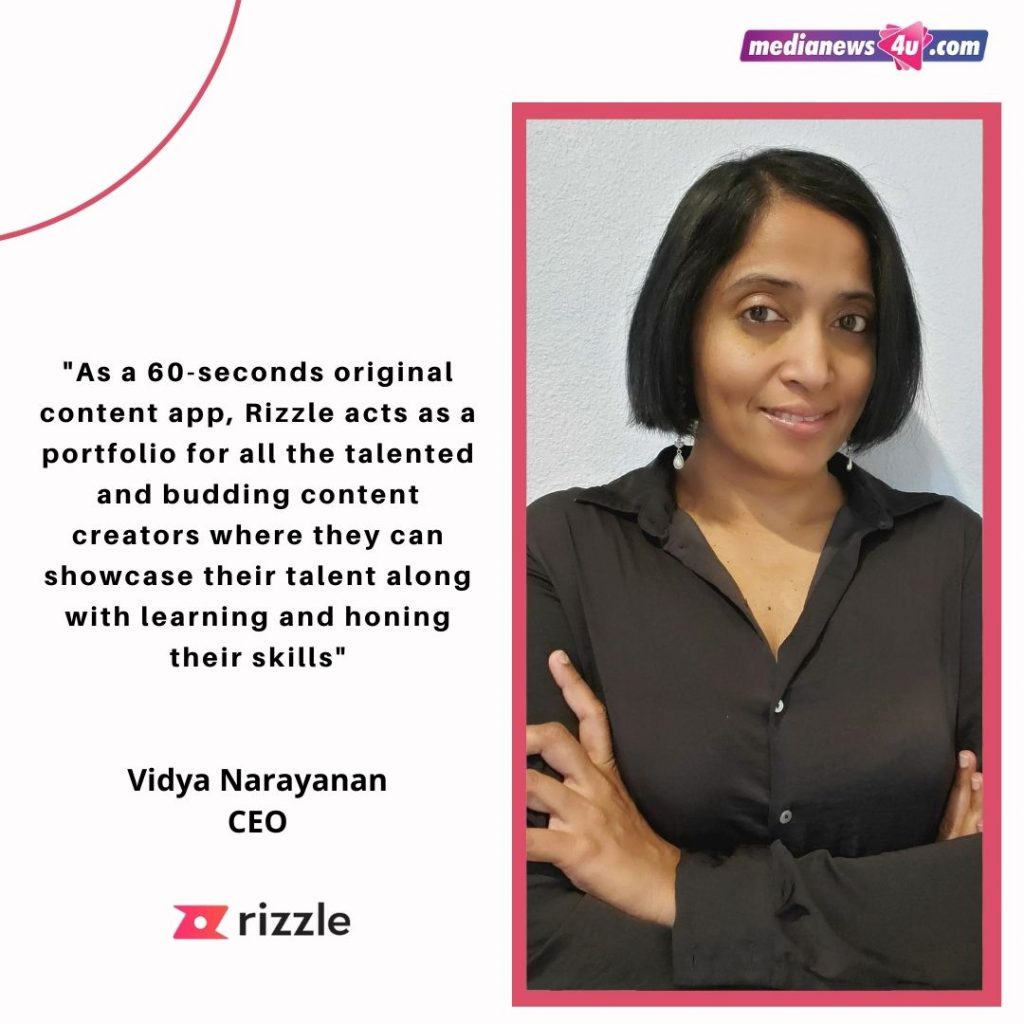 How was life before and after TikTok? – What has changed?

Rizzle launched and progressed in India and in the US even when TikTok and other apps were very much present and strong. While most other short video platforms have focused on song and dance and track-based recording alone, Rizzle developed its own unique identity. Rizzle has channels and episodic play which makes it very suitable for the nanoverticle web series. A sui generis feature on Rizzle, RSeries helps creators bring mini vertical series in comedy, drama, mystery, and other genres.

Rizzle has always been and will be a unique player with or without the ban. The reason being we have several options for creating great talk shows – with B-roll images and videos, sound effects, intro animations, and daily prompts, creators can make professional talk show content in minutes. Prompts – a compilation of all the trending topics that help newbies on the app get started-  bring the community together in discussions. Rizzle is a unique player in short videos. 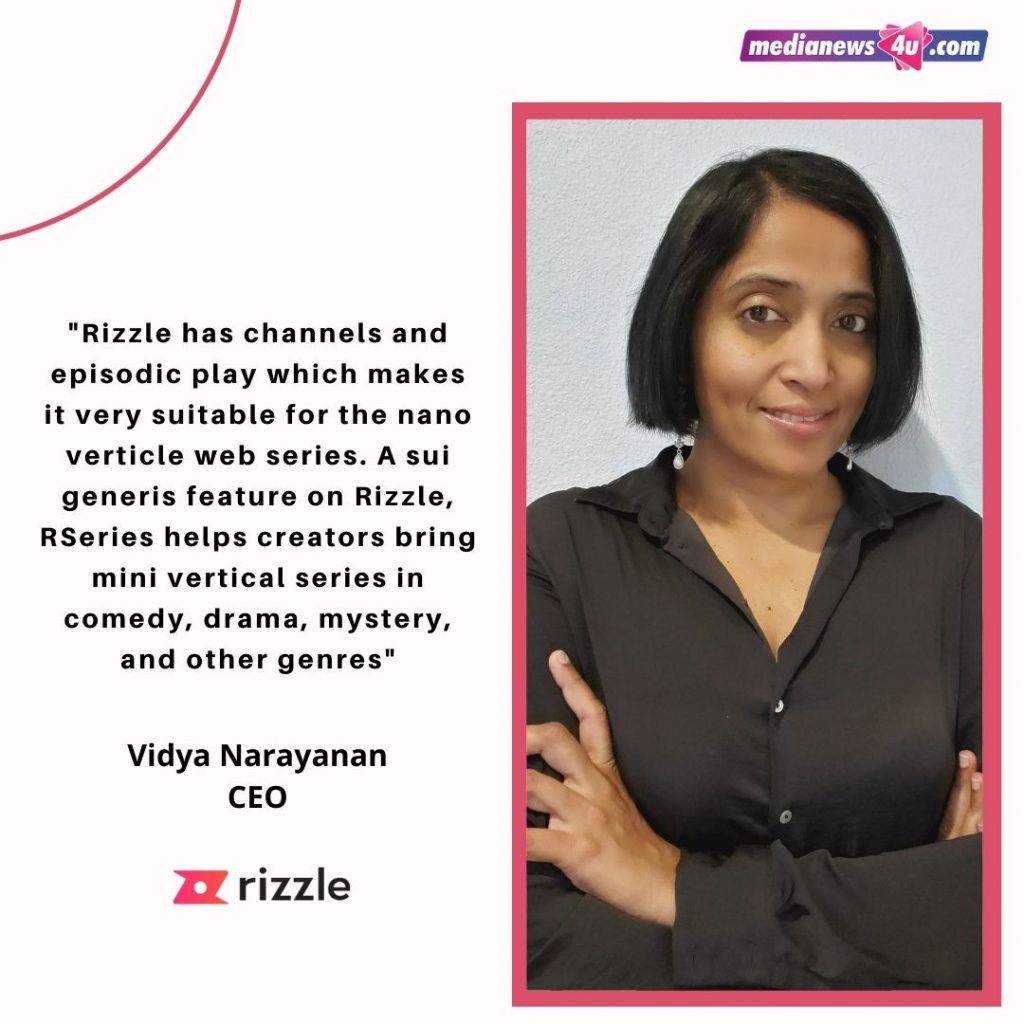 At Rizzle, data security has been our top-most priority and will always be. However, we believe that charity begins at home and so, we have refrained from ‘Chats’ & ‘Comments’ features since the inception. Our decision to completely do away with a comments section comes at a juncture when social media platforms across the world are grappling with issues of user safety, especially when it comes to female content creators. ‘Comment’ sections on social media apps have inadvertently become a playground for bullying creators.

We have a strong 3-Strike Policy that “quarantines” an account for 48 hours followed by a permanent ban if any user violates the terms and conditions, supports nudity, or posts harassing videos. Rizzle.tv keeps the keyboard warriors and trolls away, and is focused on building a positive community that listens, speaks, argues, debates, and supports. 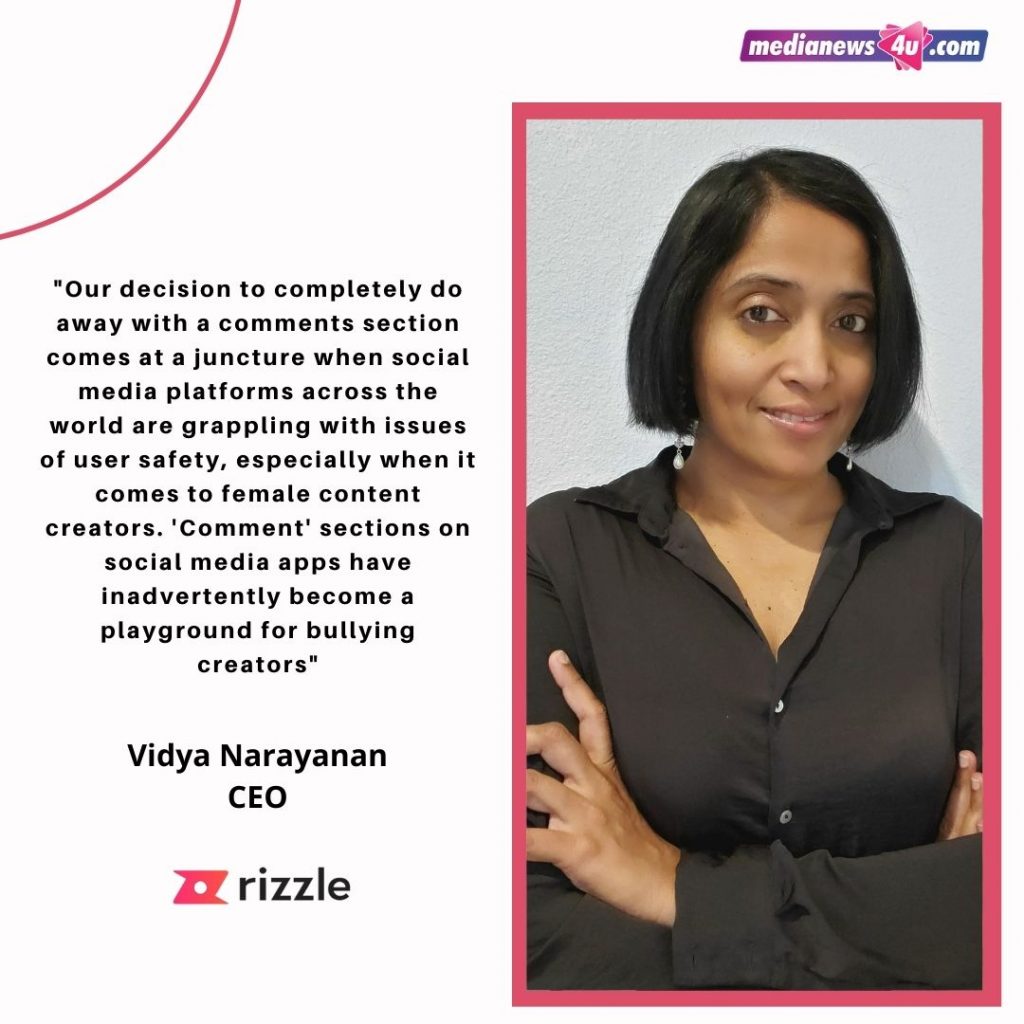 At Rizzle, we believe in celebrating diversity! After launching our free dance and acting workshops under the banner RStudios in Hindi and English, we now inaugurated workshops in South Indian languages as well. Having received a great response, we will now target other regions of the country as well. 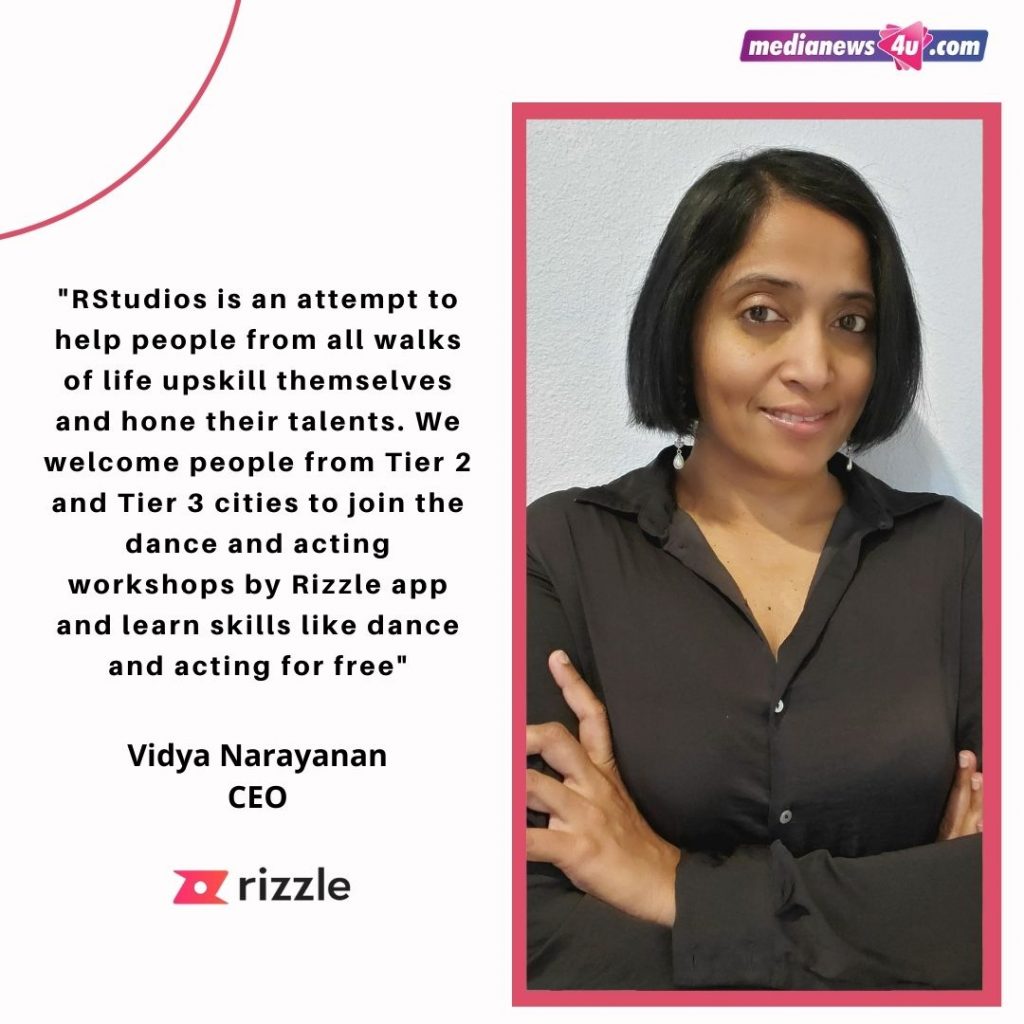 What is that you aim to achieve with RStudios?

We recently launched RStudios, a virtual workshop for acting and dance classes to help enrich talent and cultivate it to the next level. This move aims to set Rizzle a class apart from other short video apps by going one step further to equip the creators with an opportunity to learn and grow

Our power creators create upwards of 50 videos a day and host Instagram Live sessions on “Rizzle Influencer Hour” and team together to create tweet storms about Rizzle every Monday – that’s what a positive community looks like!

Chennai: The Hindu Group Publishing Pvt. Ltd. (THGPPL)publisher of The Hindu, The Hindu BusinessLine, Frontline and Sportstar has appointed Krishna...