Mumbai: After a memorable summer packed with entertainment & fun learning, the popular kids’ TV channel, Sony YAY! continues the fun-fare by bringing its young viewers a massive treat for the second half of the year. The channel will offer a fresh dose of new episodes and movies of the already popular home grown content along with additions of newly acquired Indian content. This width of content will bring one of the most diverse and robust content libraries in the category.

The specially curated programming line-up kick-started with the launch of Pyaar Mohabbat, Happy Lucky, which introduced the genre of chase comedy to an already existing fan-base.  The channel will also foray into mythological narrative by introducing a new show, Krishna Balram. Strategically culminating the release of the show with the festive fervour in September, Sony YAY! will drive this period with enchanting narratives of friendship between Krishna and his elder brother Balram. Followed by the show, the channel will present more endearing tales of Lord Krishna, depicting his life and journey through movies – Krishna the Birth, Krishna Makhan Chor, Krishna in Vrindavan and Krishna Kansa Vadh. 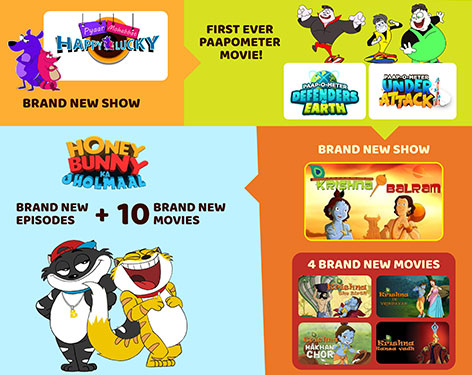 In October, Sony YAY! brings its most popular feline Jodi – Honey Bunny in a brand new avatar. Honey Bunny fans are in for an exciting treat as the channel gears up to offer a new short format with the toons for which they are planning to rope in a celebrity as well. Not only this, with new episodes and 10 movie premieres across the rest of the year, the Honey Bunny fans are in for a laughter marathon. Channel’s ghost comedy show – Paapometer also has garnered increasing popularity since launch, owing to which the channel has announced the launch of its first Paapometer franchise film – Paap-O-Meter Under Attack. The movie will witness the friendly ghosts in a never- seen-before avatar of heroic escapades to save Bhootlok.

Leena Lele Dutta, Business Head, Sony Pictures Networks India, Kids’ Genre!  “Despite all the challenges this year, we have been successful in building an unprecedented scale of content for our viewers. We have successfully forayed into new genres & redefined the existing ones. At Sony YAY!, we understand that kids need to resort to entertainment that fosters their imagination, now, more than ever. Having made kids laugh with a host of comedy shows, we are brimming with excitement as we bring the second half of the year loaded with diverse offerings.”