The Subscription revenue growth in India has outpaced advertising revenue growth during 2019 with the staggering growth of 9.3% as the cumulative revenue figures reached INR785 Billion against INR719 Billion in 2018.

Advertising revenues despite moderately higher than subscription revenues in terms of Volume, trailed in growth aspects with a moderate 5.3% growth by reaching INR795 Billion in 2019 against INR755 Billion in 2018.

According to FICCI EY M&E report 2019, the Subscription growth was driven by OTT video consumption (111%), film (10%) and television (7.5%). On the other hand, the net increase of INR40 billion in Ad Spends was because of an INR37 billion growth in digital and an INR15 billion growth in television, reduced by a fall of INR12 billion across local traditional media (print, radio, OOH). 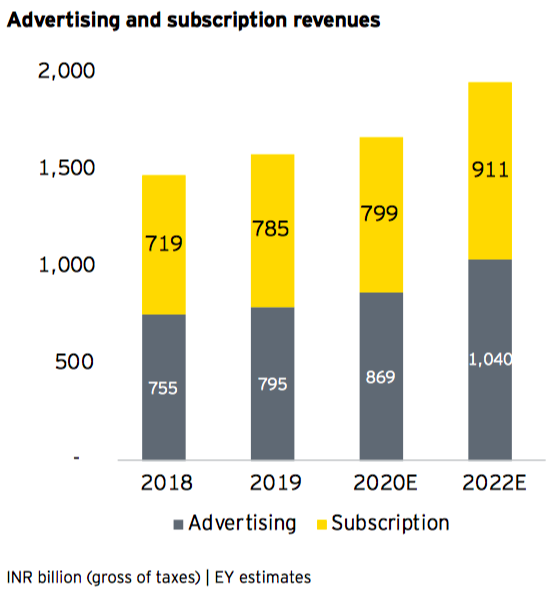 The Advertising growth was muted due to the overall economic slowdown in the second half of calendar 2019 which also impacted festive ad spending and resulted in a polarization of spends towards impact properties. The report reveals that the Traditional segments like Print and Radio ended the year with a de-growth in ad revenues, despite being relatively flat for the first seven to eight months of 2019. However, Television advertising saw 5% growth in 2019 due to large impact properties like the ICC World Cup and the general elections, while subscription grew 7.5% due to increase in end-customer prices.

While estimating the Advertising to grow at a 9% CAGR over the next three years, the report also estimated that the Advertising growth to take its front seat with projected revenues of INR869 Billion while the Subscription revenue is expected to reach INR799 Billion.

While subscription revenues increased in 2019 due to The New Tariff Order (NTO) implemented during February 2019 increased end-customer prices for television content, certain customer categories ended-up cutting the cord and moving to digital, while others reduced spends or switched-off their second and third television sets in the home. It subsequently reduced the reach of certain genres of channels and resulted in a 6% reduction in time spent watching television during the second half of calendar 2019. All these also resulted in growth of Free television in 2019.

The report estimates that unidirectional television (pay + free) reached 171 million households and that there were over 4 million connected smart televisions at the end of 2019.

Note: The above numbers exclude live events, online gaming and animation and VFX segment revenues. The report does not reflect the recent developments due to coronavirus and it is subjected to change based on subsequent developments across the markets.

TAM released AdEx’s overview of advertising by the Life Insurance category in the 3rd and 4th quarters of 2020. The...

According to the recent data revealed by Media Partners Asia (MPA), India will account for 76% of the Disney+ base...