India is home to one of the largest film industries in the world. Every year thousands of movies are being produced in India and is lapped up by a vast film-going Indian public. Indian films have been gaining increasing popularity in the rest of the world, especially in countries with large numbers of emigrant Indians. Back home the love for the silver screen plays out on the small screen as well.

South Indian Cinema is no doubt one of the best in the world thanks to its variety and richness, it has developed an own, unique and identifiable cinematic dialects, over the course of time. However, each regional cinema developed some genres better than others.

On a monthly performance basis, Tamil Movies clocked from a minimum of 87 billion to a maximum of 143 billion Viewing minutes in the November 2018 to October 2019 period.

21% of movies in terms of share of telecast time and 38% of movies in terms of share viewership contribute to telecast and viewership in the state. Out of 6,186 billion minutes, the amount of Telugu content that has been consumed is a whopping 5,618 billion minutes.
On a monthly basis, Telugu Movies clocked from a minimum of 147 billion to a maximum of 192 billion viewing minutes in the Nov to Oct period.

Movie channels contribute 42% to 48% of all movie viewership, while GEC contributes a whopping more than 50%, rest come from Music channels

On a monthly basis, Kannada Movies clocked from a minimum of 60 billion to a maximum of 73 billion Viewing minutes in the Nov to Oct period.

Movie channels contribute 45% to 53% of all movie viewership, while GEC contributes a whopping 53% to 66%, Music channels range from 2% to 6%

In Kerala we see that 21% share of telecast time with 30% share of viewership time. With a total of 1780 billion minutes, we can say that 1512 billion minutes of Malayalam content has been consumed.

On a monthly basis, Malayalam Movies clocked from a minimum of 29 Bn to a maximum of 47 Bn Viewing minutes in the Nov to Oct period – peaking during Vishu and Onam months 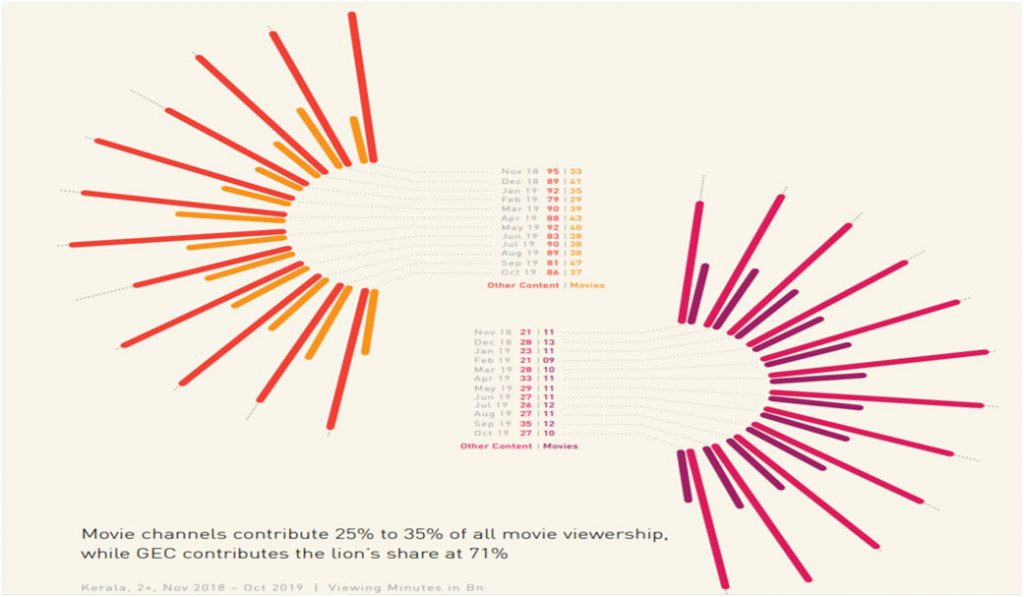