We have had only one mission – Save Lives: Rabindra Narayan, PTC Network

PTC is a Punjabi television network from India. It features general interest programming including news, dramas, comedies, music and talk shows. PTC Punjabi commenced operations on 6 August 2008 and in a year, had become the most popular television network in Punjab.

Promoted by G Next Media Private Limited, the PTC Network is world’s no.1 Punjabi TV Network. The network, under the leadership of Rabindra Narayan, Managing Director & President, has successfully expanded its base to UK, USA, Canada, Australia, New Zealand, Europe & UAE over the last decade. The PTC Network having seven channels under its umbrella namely, PTC Punjabi, PTC News, PTC Chakde, PTC Simran, PTC Punjabi Gold, PTC Music, PTC Dhol TV, is touching lives of millions of viewers across the globe everyday. PTC has put its primary focus on the troika of Punjab, Punjabi and Punjabiyat.

Rabindra Narayan, the MD & President of PTC Network, is renowned for his relentless efforts in shaping the Punjabi television industry. He is not only recognised as the man behind the first-ever Punjabi satellite channel, Punjabi world, but has also earned immense respect for putting Gurbani on the World’s television map.

In an exclusive interaction with MediaNews4U, Rabindra Narayan – MD & President, PTC Network talks to us on the channel’s growth, the innovations and the CSR activities undertaken by the channel.

Today PTC Network is the No. 1 not only in India but with the Punjabi diaspora across the world, how was it to operate the channel during the pandemic last year?

Operating the channels during the pandemic has been the most challenging task in our careers. We had to maintain the safety of our associates as well as bring up to date news and entertainment to every viewers across the globe. The Golden Temple, the Huzoor Sahib Gurbani telecast happens every day and has never stopped for a day. Our news reporters and editors have been on the field and on the task like any day and the role of PTC NEWS, in worldwide coverage of pandemic, was even appreciated as well as awarded at several awards ceremonies. Special masks, extended mikes and virus killer machines have been the norm of the day. Every staff member and their families are being encouraged to get vaccinated. From ground shows we turned to virtual events and successfully used technology to create the most engaging shows.

What were the idea and the strategy to telecast the Gurbani live from Sri Darbar Sahib for your viewers?

Gurbani has therapeutic effects on the mind and soul. For the last 23 years our team has been telecasting Gurbani from Sri Darbar Sahib, every single day. Many devotees from across the globe cannot visit the Golden Temple frequently but every devout Sikh lives by Guru’s teachings and the daily Order is to be strictly followed. We have been proud that the service has continued uninterrupted. In fact, we started additional telecast during the afternoons from Sri Darbar Sahib, Amritsar, since people were stuck at homes and wanted to savour Live Gurbani. 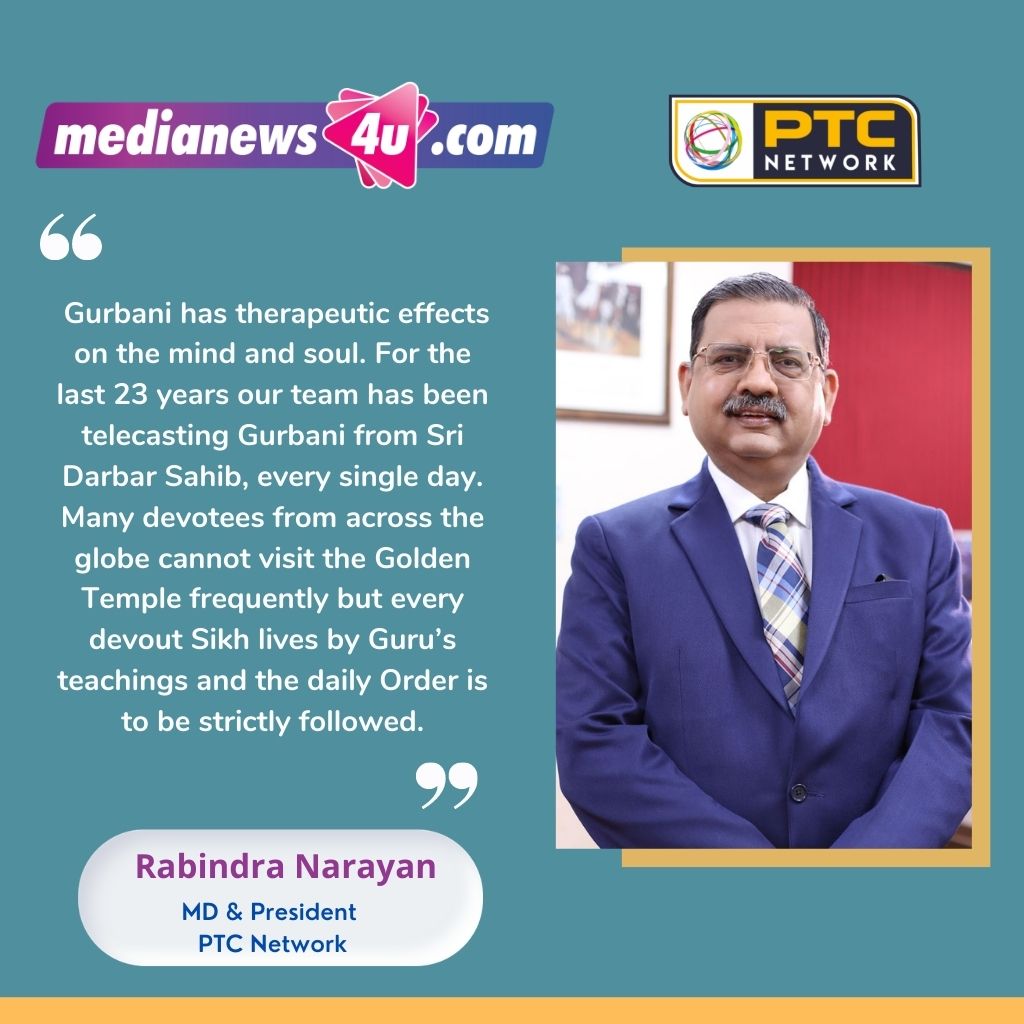 The pandemic & the ensuing lockdown has brought a lot of hardships for the people how as a network and you personally have tackled this crisis?

We have had only one mission – SAVE LIVES. As much as we could during the last 14 odd months, we have tried to help as many people as we could. Our reporters were not just gathering news but also arranging medicines, organising food and oxygen to whosoever needed it. This unique service by PTC Network was recently awarded at a couple of media awards ceremonies.

The lockdown also saw a spurt in the digital sphere, what were the innovations by the network for the audience viewing you on the digital platforms?

Digital platforms have got tremendous uplift and spread. We have been fortunate enough to have had the services of 23 reporters from 17 countries reporting live from Ground Zero on the pandemic and other developments. PTC News is the only Indian TV channel empanelled in White House and the Canadian Parliament. Our own-developed OTT app – PTC PLAY – has seen remarkable growth and a couple of web series in Punjabi are in the works to premiere on it soon. We even acquired best of the Hollywood movies dubbed in Punjabi and they are getting amazing response on the app as well as the channel. We own and manage around 104 Facebook pages, 6 Instagram pages, four twitter handles and four websites. There is not a single Indian home across the world which does not get PTC Network channels now. 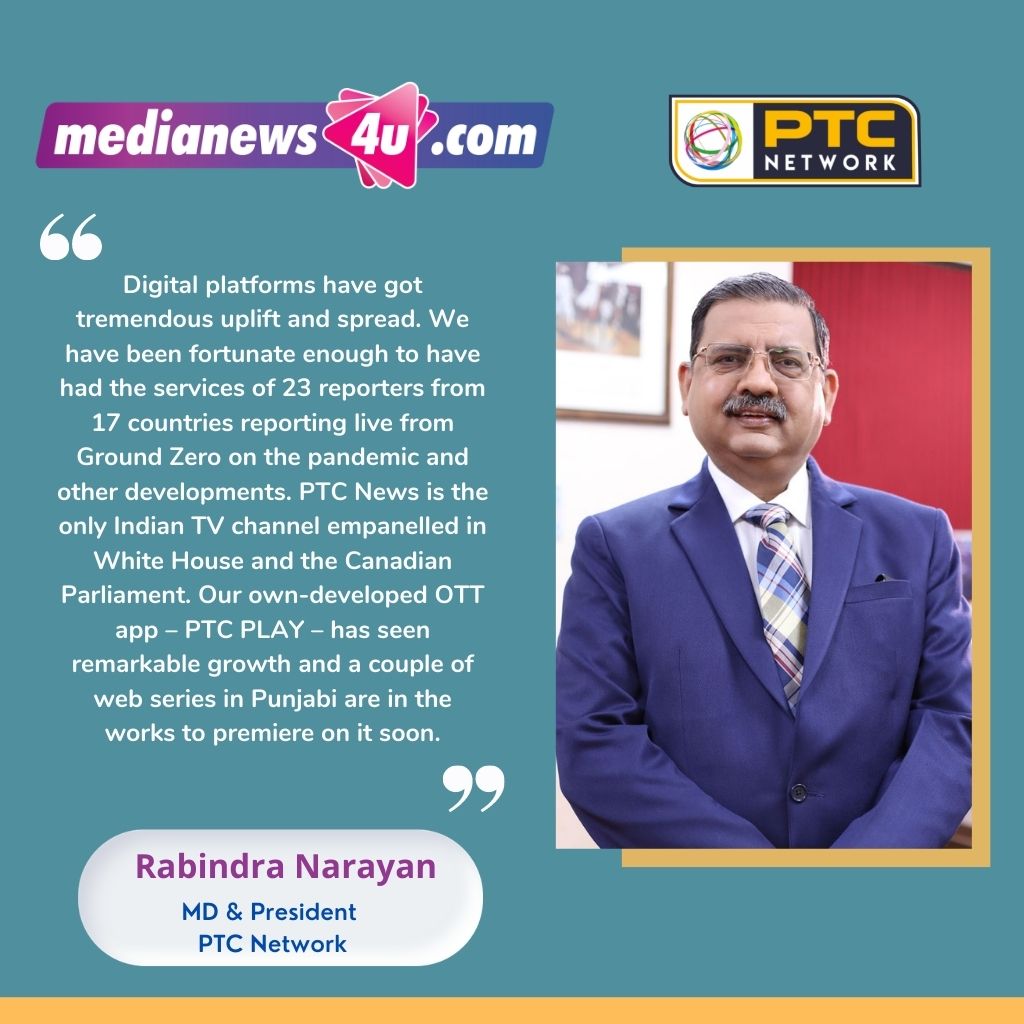 What motivates you and keeps you positive? How have you kept your employees positive in this crisis?

I would say it is the employees who have kept the morale high and in turn the whole organisation has been like an extended family wherein each one is helping the other one. We even employed the services of a mental health counselling service but it has been the HODs who have been counselling and leading by example. Nobody told our reporters to arrange langar for the poor people stuck in lockdown but on their own the reporters and other staff contacted NGOs, SGOC and other organisations to supply food and medicines. Remarkable indeed. 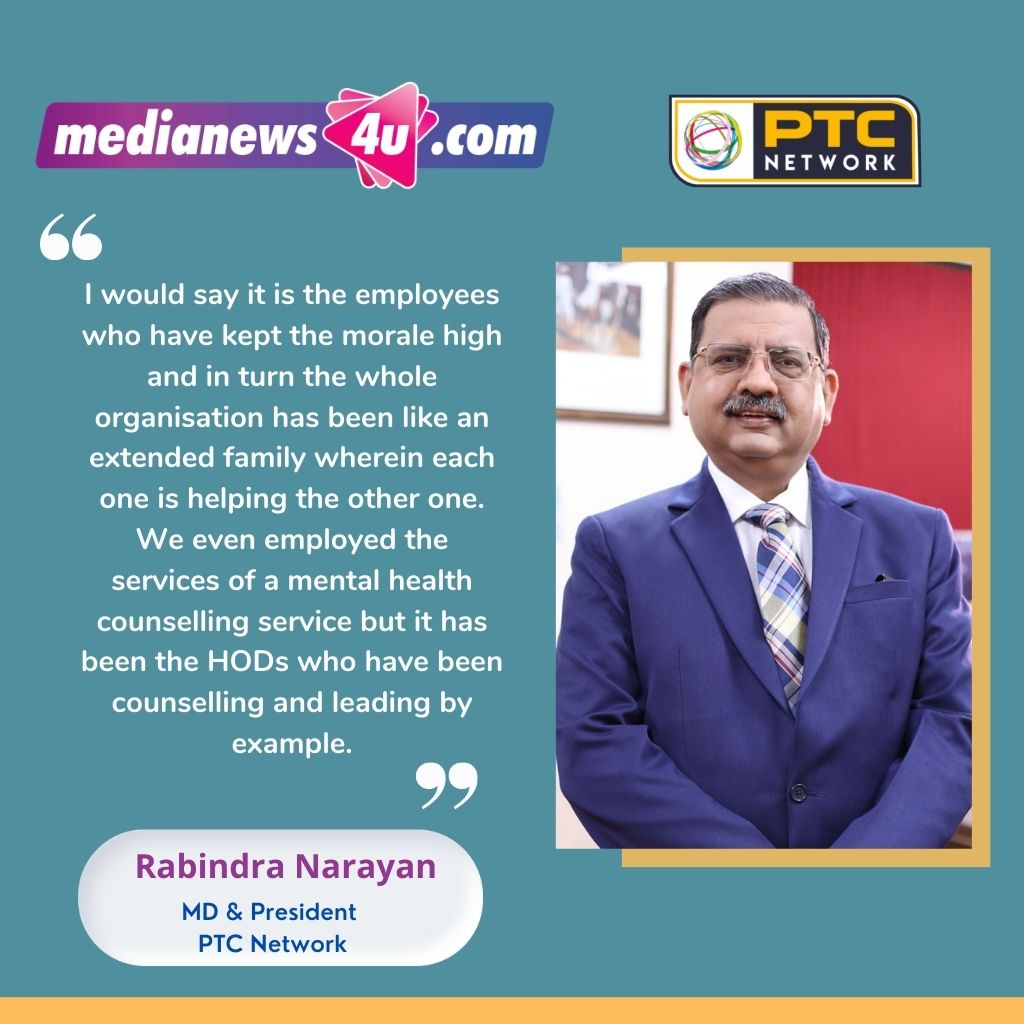 The network also has other business interest like Music labels, Movie Production & Distribution, what made you venture into these businesses?

There has been no stop in creating music. We adapted and encouraged artists to do e-concerts. So far we have done six e-concerts – each better than the other. We have been recording artists remotely and then mixing sound by getting instrumentalists to record their tracks separately and send us so that final mixing can be done. Music videos have been created in our own studios and so far we have released around 170 original tracks during the last one year.

What are the CSR activities the Network has undertaken in this pandemic?

PTC Network contributes almost 2 crores every year to SGPC towards their Education Fund so that they can give education to poor and needy students in Punjab. We have been collaborating in many social activities with local radio stations, running awareness camps and have even organised a health camp. SERVICE remains at the core of all our activities. 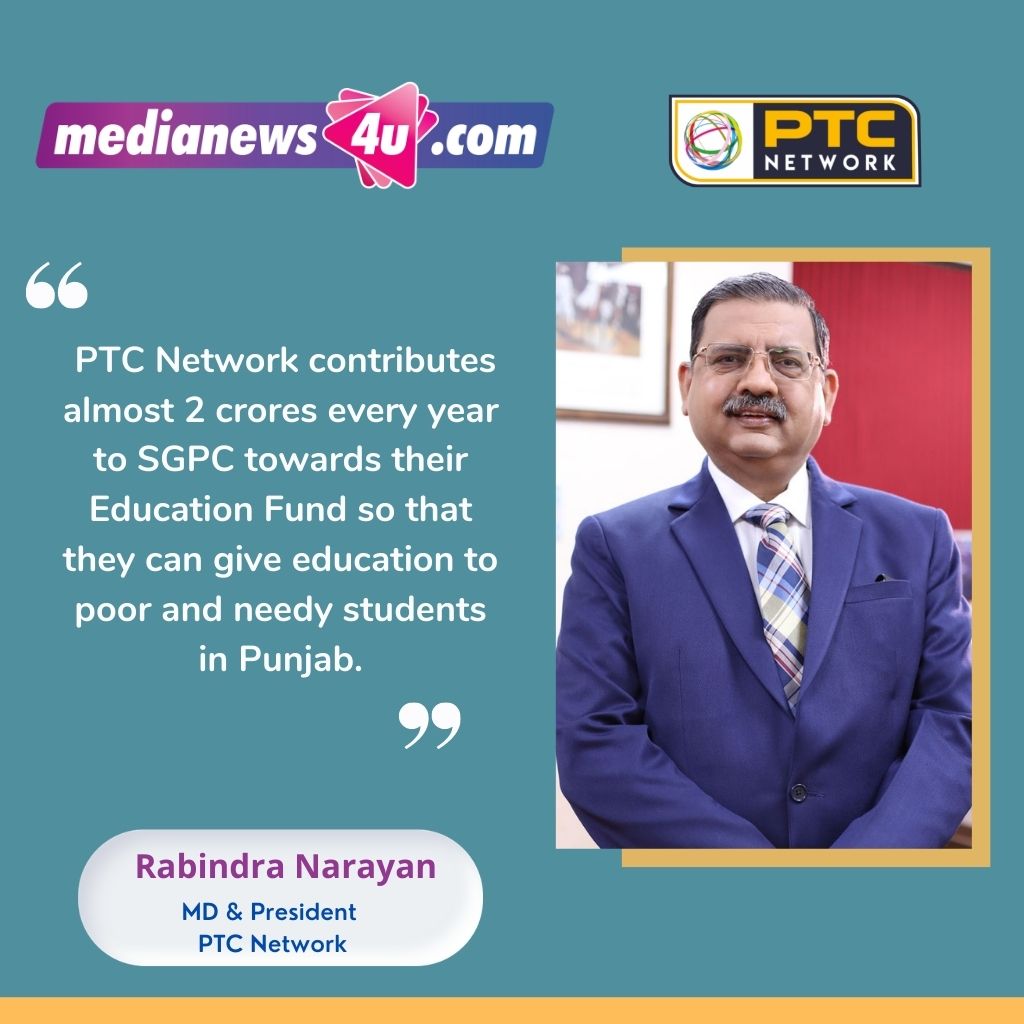 Star Plus extends its fiction shows to seven days a week

Star Plus, Hindi GEC channel, set to telecast its fiction shows on all seven days of the week starting 2nd...