New Delhi: After months of uncertainty, the much-awaited Indian Premier League (IPL) 2020 is set to commence from September 19th in the UAE. The tournament appears to be high on drama with new events unfolding each day in the lead-up to the opening ceremony.

Although players from different teams have withdrawn from the series, the situation looks grim for the Chennai Super Kings (CSK). Not only did its leading players Suresh Raina and Harbhajan Singh pull out of the tournament, but also two of its other teammates tested positive for Covid.

YouGov’s latest survey reveals although a large proportion of urban Indians (66%) think these developments can prove disadvantageous to CSK, nearly half (46%) still believe the team will take the trophy home in 2020. Some (23%) believe Mumbai Indians (MI) is going to win the IPL yet again this year. Few think Kolkata Knight Riders (12%) will be the winners, and fewer feel Royal Challengers Bangalore (7%) or Sunrisers Hyderabad (5%) will walk away with the trophy. Chances of Kings XI Punjab, Delhi Capitals and Rajasthan Royals winning the series are believed to be the least by people. In fact, the two teams that respondents are most excited to see competing against each other in the IPL finals are CSK and MI.

The unfortunate developments around team CSK have fans worried & almost six in ten (58%) think the safety of other teammates as well as the players of other teams is likely to be at risk. Only one in five (20%) feel these events are unlikely to pose a threat for the other players.

Given the IPL is the only sporting event of the year for Indians amid this pandemic, a majority (68%) expressed their interest in the tournament and said they will be following it. However, close to a third (32%) showed lack of eagerness in the IPL matches.

Despite the delayed start of the series, YouGov data shows interest level in this season of IPL is the same as last year (67% vs 65%), and the pandemic does not seem to have affected the popularity of this sporting event. The high interest level in this season could be the reason for more than half saying their time spent watching movies (61% saying this), web series or online content (57%) and other sports (54%) is likely to decrease during the upcoming IPL season. 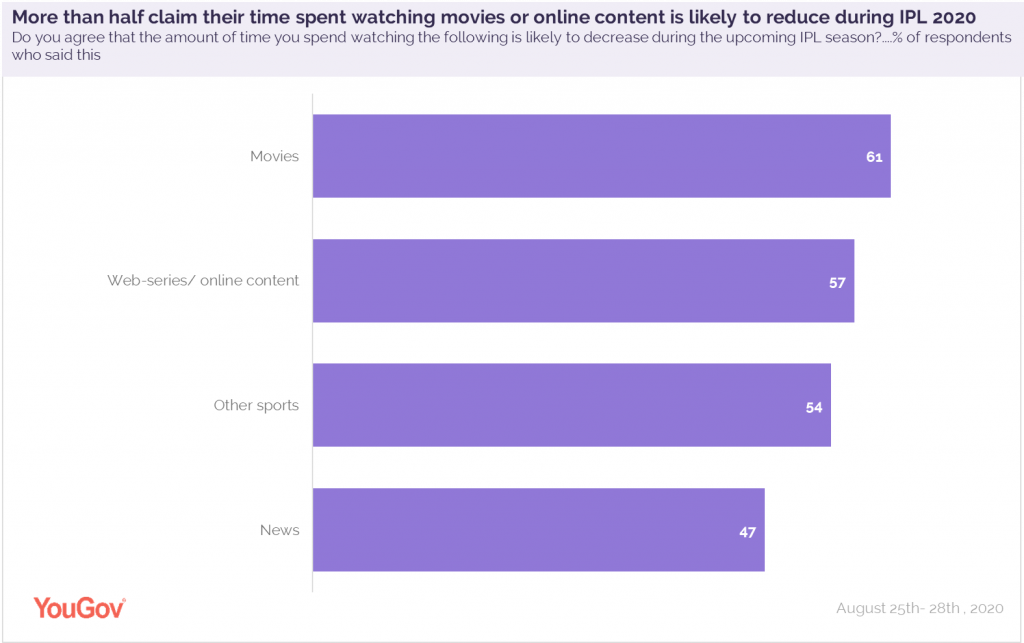 Out of those who showed a low level of interest this year, IPL being held outside India (39%) and fatigue of staying home and general loss of interest (36%) emerged as the main reasons for not wanting to watch the series this year.

YouGov will continue tracking the excitement level and interest of Indian cricket fans throughout IPL 2020.

YouGov Omnibus data collected online among 688 respondents in the country between 25th-28th August 2020 using YouGov’s panel of over 6 million people worldwide. Data is representative of the adult online population in the country.