Internationally revered culinary reality show, Master Chef celebrated an important milestone in an event in Chennai. Sun TV recently announced the launching of the international show Master Chef in regional adaptations, the producers of the show – Innovative Film Academy and Endemol Shine India today announced that the show will clock its 500th on-air episode with the launch of Master Chef Tamil. The show is slated for launch on 7th of August 2021 and will be aired on Saturday and Sunday between 9:30 PM to 10:30 PM on Sun TV,

In an exclusive chat with MediaNews4U, Abhishek Rege -Endemol Shine India spoke about the regional adaptation of Master Chef, the association with IFA, and the way forward for EndemolShie India …

Now Master Chef in the south regional languages starting off with Tamil, reasons to explore this market?

I feel that our content has always been loved by people, but you have never brought it to India till you have never taken it across the key monetizable markets. Presently we are looking at Hindi plus six regional languages, four southern, Bengali, and Marathi. Later we will also be looking at Gujarati, Bhojpuri, or Punjabi and other ones also, currently we are waiting for the right values to come into the market and the right monetization scale, and then we can get global products to get adapted to these languages. Similarly, that is how we took Big Brother or Bigg Boss into regional space and that’s how we want to do it with all our brands. Master Chef is something that came up for discussion and it has finally gone through. We have been discussing this for a couple of years now. 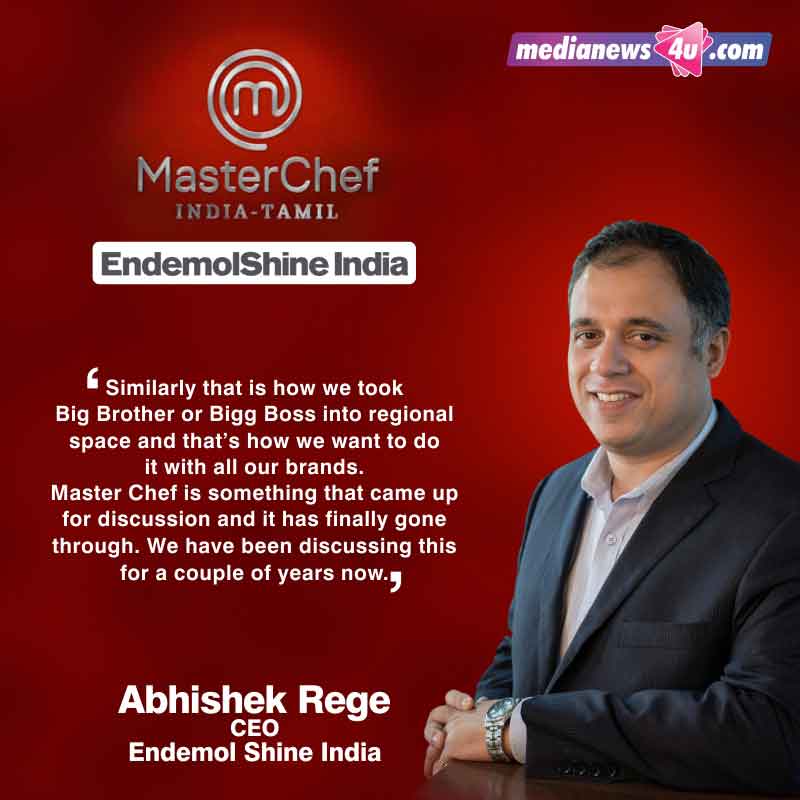 What is the association with IFA?

From the creation of content perspective itsEndemolShine India making the content, there is no change in that. There is this model with Sun TV which could also answer your question why Sun TV, buy a slot and the marketing company monetizes it. Technically IFA has played the role of a client for us, who normally would have been a broadcaster.

Today the South market has many channels, SUN TV was the choice as it is still the major player?

Sun TV is a major player across the South market. But first people have to believe in the show, IFA was interested in associating with Endemol Shine India. They came in as partners and marketers for the show. Therefore, they bought a slot and invested in the show, and also packaged the whole thing that is how it worked out with IFA and Sun TV. Having said that we could have bought a slot anywhere else, but I think Sun TV is dominant, they have that revenue model going and also the numbers have been strong with Sun TV right now not only in Tamil but in the other south languages also. This is the main aspect we tied up with Sun. 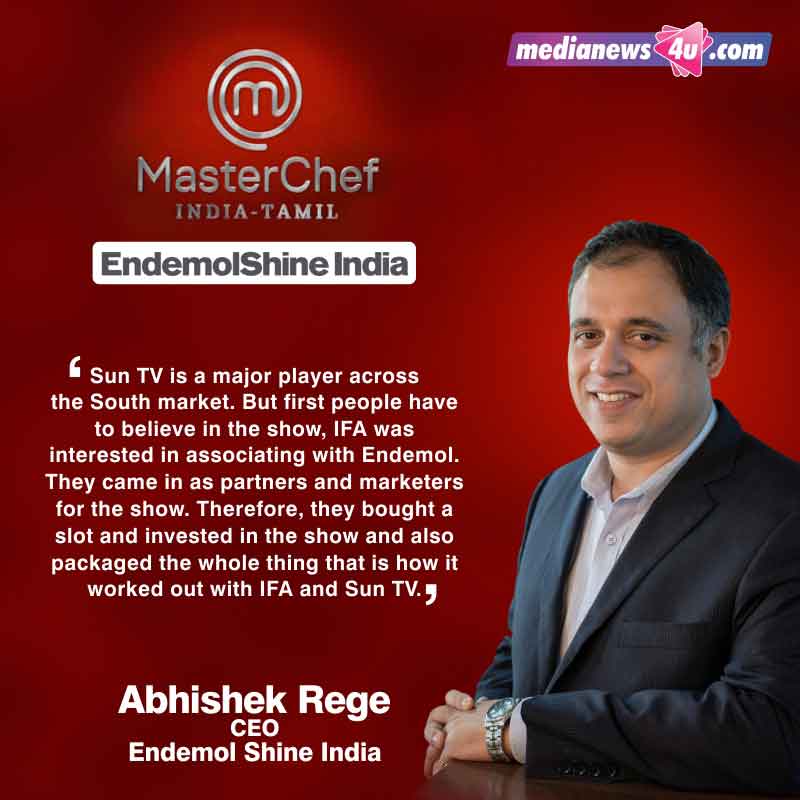 The difference in the logistics between various broadcasters? In Star TV it is commissioned, how does it work when EndemolShine India owns the IP?

In Hindi all broadcasters’ commission shows, there is no buying of slots. What we provide them is a ground production service and we also package the show for the channel. But the license of the show is still with Endemol Shine India. All Master Chef Season in Star TV, there is a limited period or limited number episodes they have done. That goes for the same case for regional as well.

In the Southern languages, you have four Cine stars as hosts; this is the first time for Master Chef?

There are multiple levels at which these celebrity’s work. Globally they create stars; ‘Big Brother’ participants are commoners who then become stars through the show. In India we have always been driven by celebrities; if you look at the first season of Master Chef in 2010 we had Akshay Kumar who came in and shot for a few episodes. It differs from language to language. We thought that the first-ever Master Chef in Hindi needed to have a connection with the audience, having said that there is always a difference and we think that there is a much stronger connect with the host in the south. For us it also makes sense to have these celebrities for a long-term association, to own the brand in that sense and the audiences are also interested in watching the show. There is also another reason, as all the hosts are also fans of the original Master Chef Australia. All these things put together made sense for us to finalize these hosts. It also helps you when most of these channels have a large number of cooking shows which is aired in their afternoon band and we had to make sure that we are ahead of the competition. There is a show and there is a format that sustains itself, how do we get the eyeballs? The host is the only one who can reach out to the audience to come and see what I’m doing right now. And when they get to the show it’s our job to retain those eyeballs, to give you an interesting show. The selection of Chefs for the show?

Absolutely, they will be very well known in their trade. How many chefs do we know in Bangalore, Delhi or Chennai that way? Sanjeev Kapoor or Ratnani a little bit but I know we fail as a mass. Like in Australia also the food culture is very different. We are hoping that down the line these names will also become big. Also there is this flip side that we are seeing a huge number of youngsters today taking up Catering and food craft as a profession. I am genuinely surprised about the number of kids who talk about MasterChef, particularly MasterChef Australia, and how impressed they are with what is done in its kitchen. Pretty frankly for us the brand MasterChef is globally a bigger brand than Big Brother.

In this crisis and lockdown how did you manage the auditions and shooting for this show?

Basically, there are two parts to it. One, we were intending to shoot and deliver it quite some time back, around April/May. But because of the whole lockdown coming in again and the safety issues involved we kind of pulled back at the last moment and we waited for the lockdown and the second wave to settle down. Another part is – unlike the open auditions that always happen; this needed a bit more research-oriented approach in reaching out to people. In the gap when we are talking about Feb/Mar, the teams have been reaching out to people, have been calling them to central hubs, etc. in the cities that we went to – Coimbatore, Madurai and we got some of them to cook and taste, etc. It’s not like an open Indian idol audition. It doesn’t work like that. It’s more focused; we reach out to a lot of people or food classes, the central catering points in every city. We also tried to reach out to a lot of home chefs. 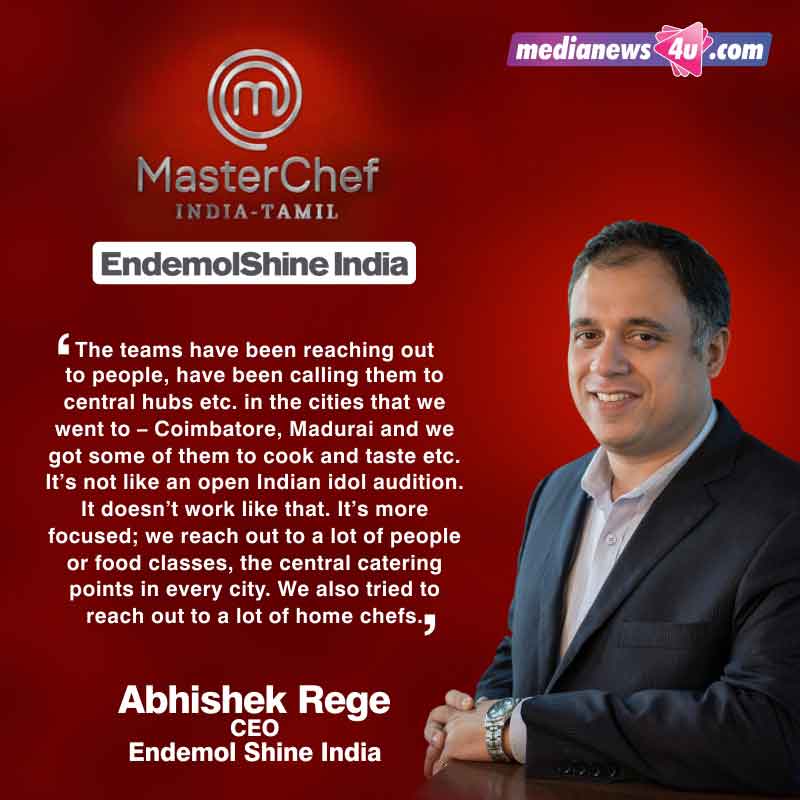 The shooting is an ongoing process. As we shoot in Tamil, Telugu, we will also find others in the pipeline. We will try to find a match in dates. We don’t usually shoot everything in one go as there are off-sites, masterclasses, and many other factors that keep happening in parallel. We like to keep it as fresh as possible. We start with the Tamil telecast on the 7th of August followed by Telugu.

Is Master Chef Hindi on the cards now?

We are in talks. We have just finished a season in Jan 2020. And then came the lockdown do we didn’t really get a chance to get back in. The lockdown kind of discounts this year. Hopefully, sometime around early-mid next year, we should see MasterChefHindi back again.

You have a lot of things on your plate now with Bigg Boss coming in. What are the other shows on your plate, not in Hindi but in other regional languages?

There are many more. Our focus has been growing. There are many 3rd party formats that we are trying to get to India; they are under discussion so it’s not easy to name them. But largely our focus is the script. There has been a lot of development. We started off with a show called ‘Test case’ on Sony with Mr. Bachchan then we did ‘Mission Mangal Mars’ with altBalaji, ‘Arya’ on Hotstar, and Bombay Begum’ on Netflix. We are shooting another Netflix show and a few more in the pipeline. We are also going to do a couple of more shows for MX Player. There is all sorts of models we are working on, larger ideas to develop, we would also be doing the remake of ‘Oh My Kadavule’ it’s a co-production with Umesh Shukla. 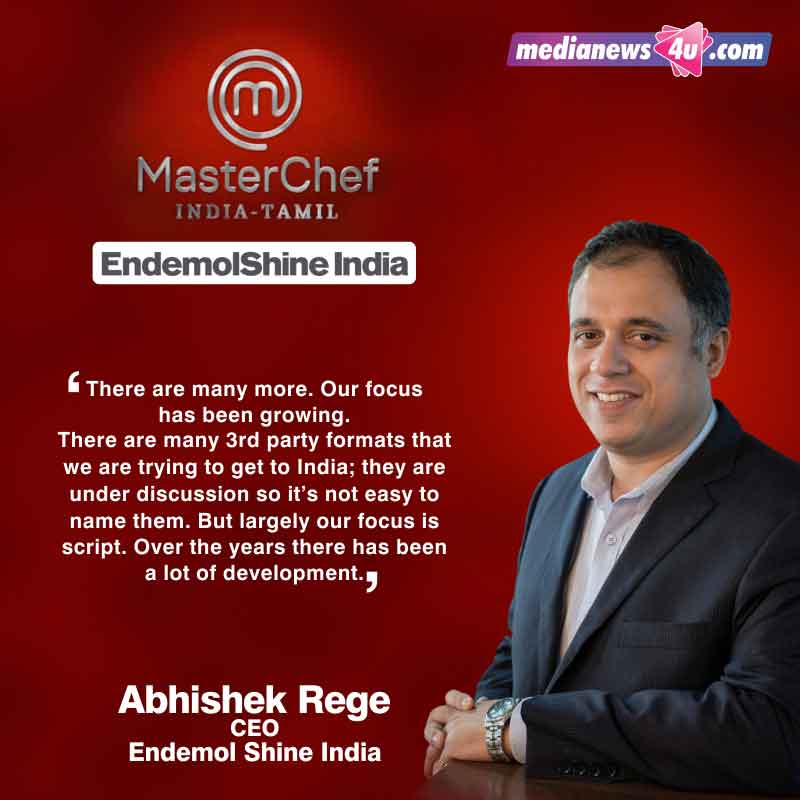 We have made a lot of soaps for the south market. In Marathi, we are doing a show that will be on air sometime in mid-August. We are trying everything; we are not leaving anything behind.

Are you planning to get some of the scripted shows of Endemol global?

Absolutely, just a brief background last year June 2020 Endemol Shine India shares were sold to Banijay group so technically we are called BanijayGroup. Banijayhas a lot of scripted shows and we do a lot of scripted adaptation in the market, for example, ‘Arya’ is one of them. We have signed up for ‘The Bridge’ with another studio. Our global products are from the combined entity, EndemolShine India – Banijay, like Black Mirror and a few animation series. When we do scripted shows, it does not work like a non-scripted show, the team has to collectively work on these shows. It’s not like that I do Bigg Boss or that I work on a reality show so my same team can work on both, it’s a very focused effort. It is a work in progress.