With special festival programming, movies, events, and other shows we are looking at increasing our rates for the upcoming festive season: Siju Prabhakaran, ZEEL

The Zee Network has 20% share of the all India viewership and 1/3rd of the viewership comes from South cluster. South region itself gained prominence and in times to come with the content line-up these would be strong set of channels.

Overall, in all 3 markets (AP & Telangana, Karnataka, TN) Zee had its presence for long and a very strong comeback. While in Kerala, the network has managed to consolidate & grow its market share.

In an exclusive chat with MediaNews4U, Siju Prabhakaran, EVP and Cluster Head South Business, ZEEL spoke to us on the content line up of the South cluster and the advertising revenues they are looking at during the festive season.

Zee Tamil has topped the chart. How was it for a comeback after 5 months?

Zee Tamil’s growth since the comeback has been very encouraging. We managed to send a strong invitation to our viewers post the comeback with our serial characters led, channel invitation comeback campaign with the theme ‘Idhayathalinaivom, idhayumkadapom’ which means “coming together in spirit and winning together in any situation”. The campaign resonated well with the core audience as it had their favourite characters of Zee Tamil inviting them to come together in the new normal.

Zee Tamil largely went with a Fiction heavy approach to win back the viewers and introduced ‘Mahasangamam’ episodes as a strong content invitation uniting 2 different shows into a single storyline where characters in both the shows come together and this delivered good ratings. We went with 4 shows of 2 Mahasangamams (20:00 to 21:00 and 21:30 to 22:30) which delivered ratings and helped us become slot leaders in prime time.

We also upgraded our fiction offerings to all 7 days a week, which was a tactical move to win over our audiences who wanted back good entertainment which was missing earlier.

The comeback also presented set of challenges during our shoots where we have taken utmost precaution while shooting the episodes by adhering to the government rules of working with limited no. of staff, wearing masks, maintaining social distancing, frequent body temperature checks, sanitizing the sets after every shoot and washing hands being followed rigorously. While the lockdown also taught us important lessons which helped us improve our banking of episodes so that we are better prepared for any such interruption in the future. With the overwhelming response to the comeback, we are enthused and energized to approach our content strategy with renewed vigor and are eager to entertain our audiences like never before. 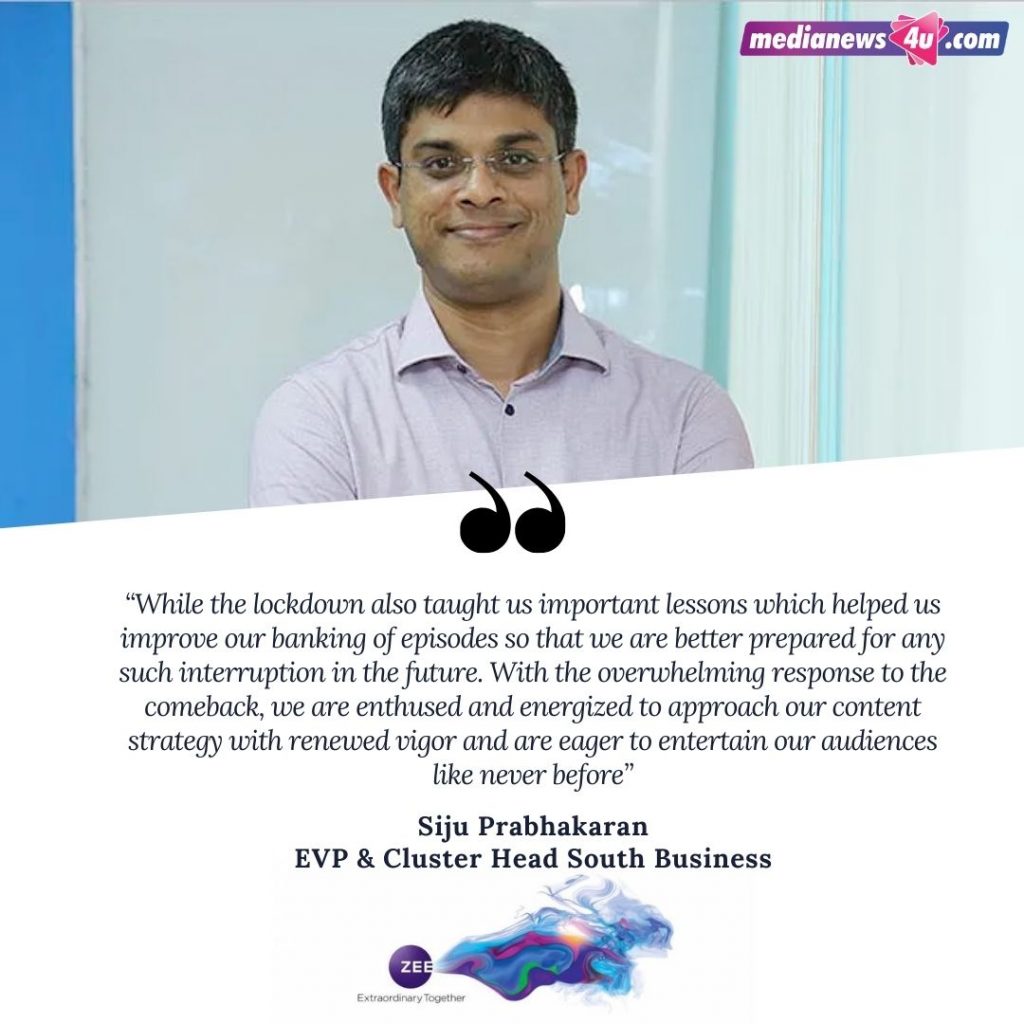 Zee channels have consistently been audience-centric, and the pandemic gave us the time to reflect and re-evaluate the audiences’ viewing patterns and interests.

In Zee Tamil, we have Suryavamsam as a prime-time fiction offering, which will air starting September 21st. We have also acquired the satellite premiere rights of Queen Series which will be aired every Sunday starting 13th September. There are more fiction and non-fiction show offerings that will be coming soon on Zee Tamil. These include (in the fiction segment) the story of Dr. Ambedkar and (in the non-fiction segment) Zee Super Family- a fun filled game show 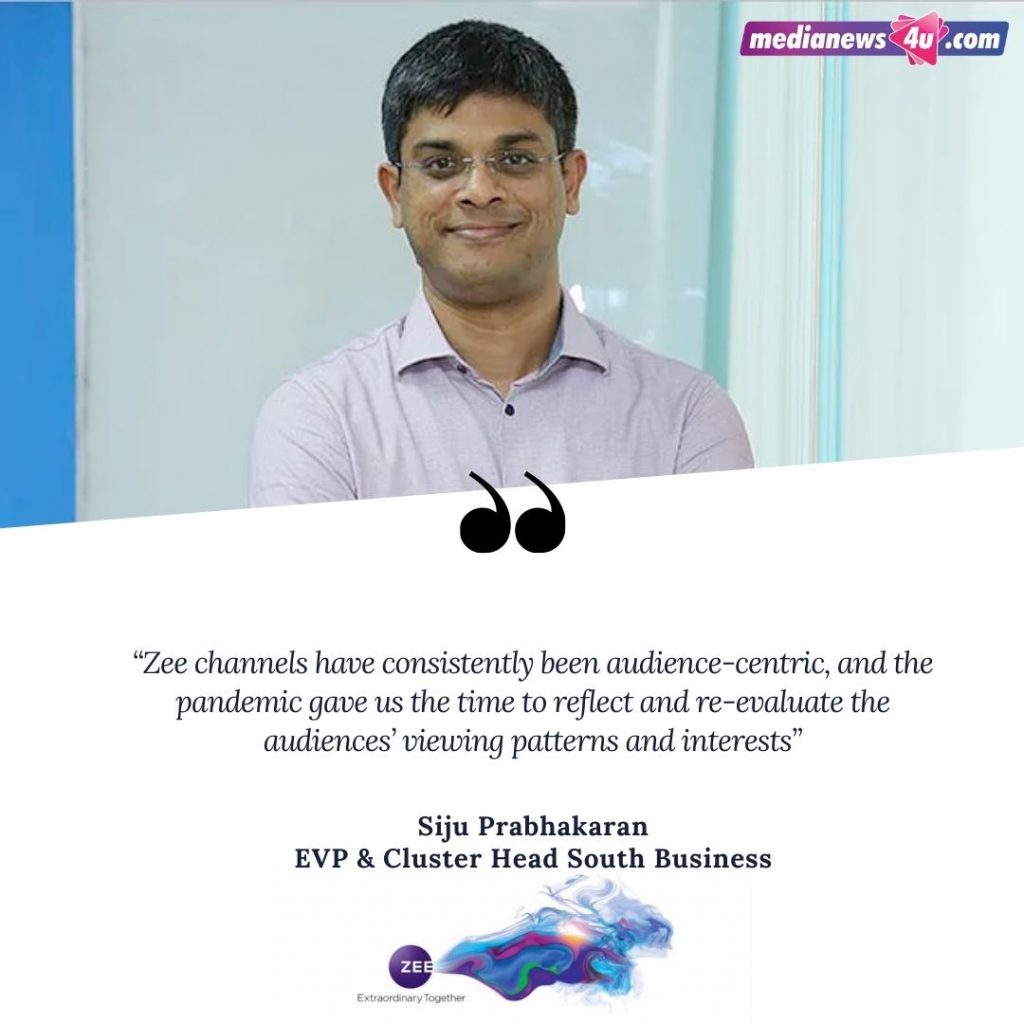 In Zee Telugu, we launched Hitler Gari Pellam at 6:30 PM, which opened with a bang of 8.1 TVR in urban centres and emerged as slot leader in its launch week. Our flagship show ‘Sa Re Ga Ma Pa’ on Sundays at 8 PM – opened with 6.5 TVR during the launch week. We are planning to launch a new social fantasy fiction show called ‘Naga Nomu’ in the first week of October, followed by 2 new fiction shows. In the non-fiction space, a never seen before dance reality show will be launched soon during the Q3.

With Zee Kannada, we are going to launch Comedy Kiladigalu Champions season 2 and extend the airing of Sa Re Ga Ma Pa- Season 17 to 2 days during the weekend. This will help bring about a balance between our fiction & non-fiction offerings. We are going to bring 2 original fiction shows will be launched in the next Quarter. Also, we are tweaking our fiction show plots with multiple highpoints for the tight viewership.

In Zee Keralam, launch of Karthika Deepam during the lockdown, garnered 2.85+ TVR (U15+) during the launch week. Currently, we have 2 non-fiction shows planned, which will be launching at the end of September and end of October respectively. The launch of a new fiction is also in the works.

During this lockdown we have seen OTT viewership spike, now that original content is back on TV how are you seeing the viewership going forward?

I believe that OTT viewing is primarily catered to individual viewing and television to family viewing. Both are equally important and prevalent. Family viewing in India will never go out of fashion! If the successful comeback of all our channels indicate anything, it is that with the return of fresh content across these channels TV viewership has taken great strides with newer viewers who are getting added to TV. The festive season is on us, what would be your strategy to woo back advertisers?

While the Q1 was a washout not just for us but for the industry, post our comeback in Q2 things are improving gradually. We feel there is a lot of pent-up demand which is going to come any which way in the Q3 cycle.

We are also geared up with lot of special programming across southern markets, along with original content, lot of content innovations in all our channels.  We as a broadcaster are well poised to capture this increase which is going to happen. We completely believe in content driven consumer strategy to grow our viewership, the way our channels have shown growth from pre-covid to now is a testament to this. 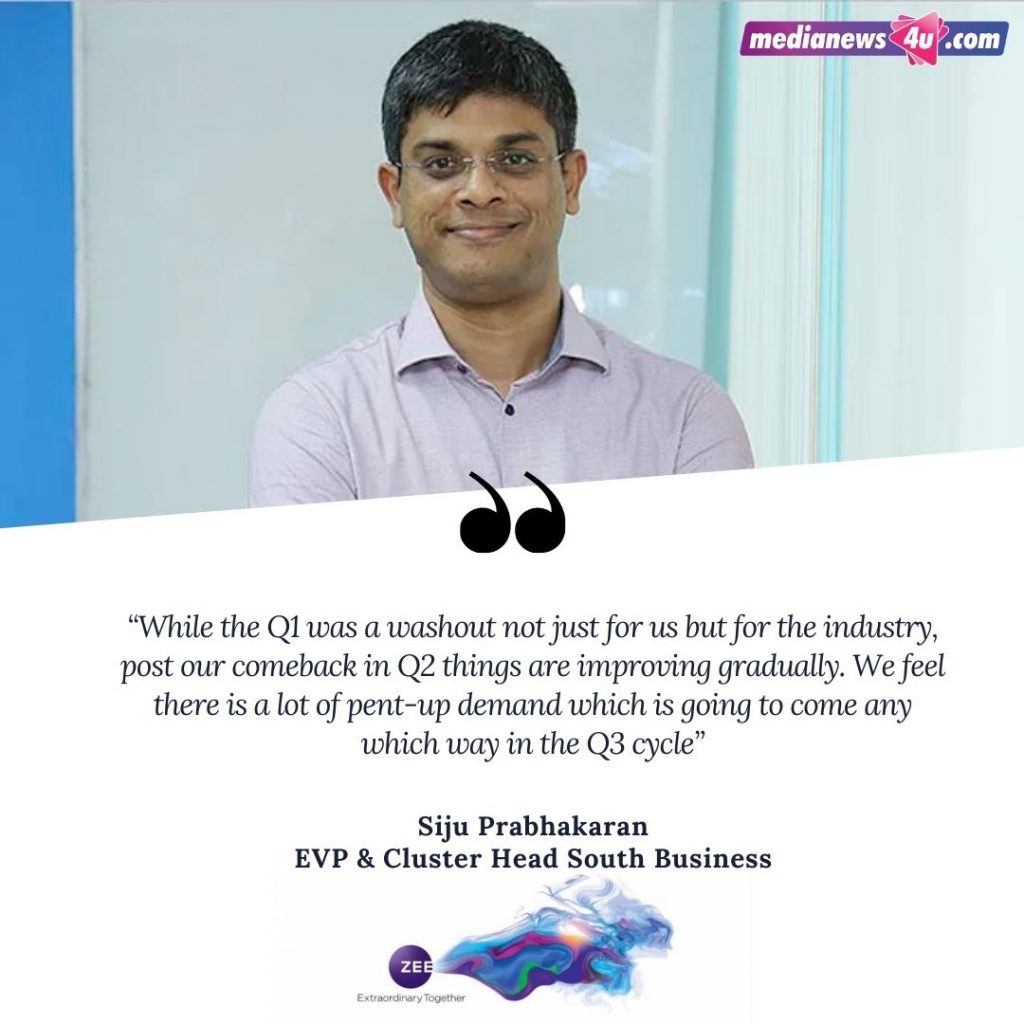 Hyper Local advertisers, are they planning to come back to TV?

We do see green shoots of these hyper local advertisers. For example, some of the players in textile, appliances and food categories etc are making a comeback into TV advertising, which is a good sign. 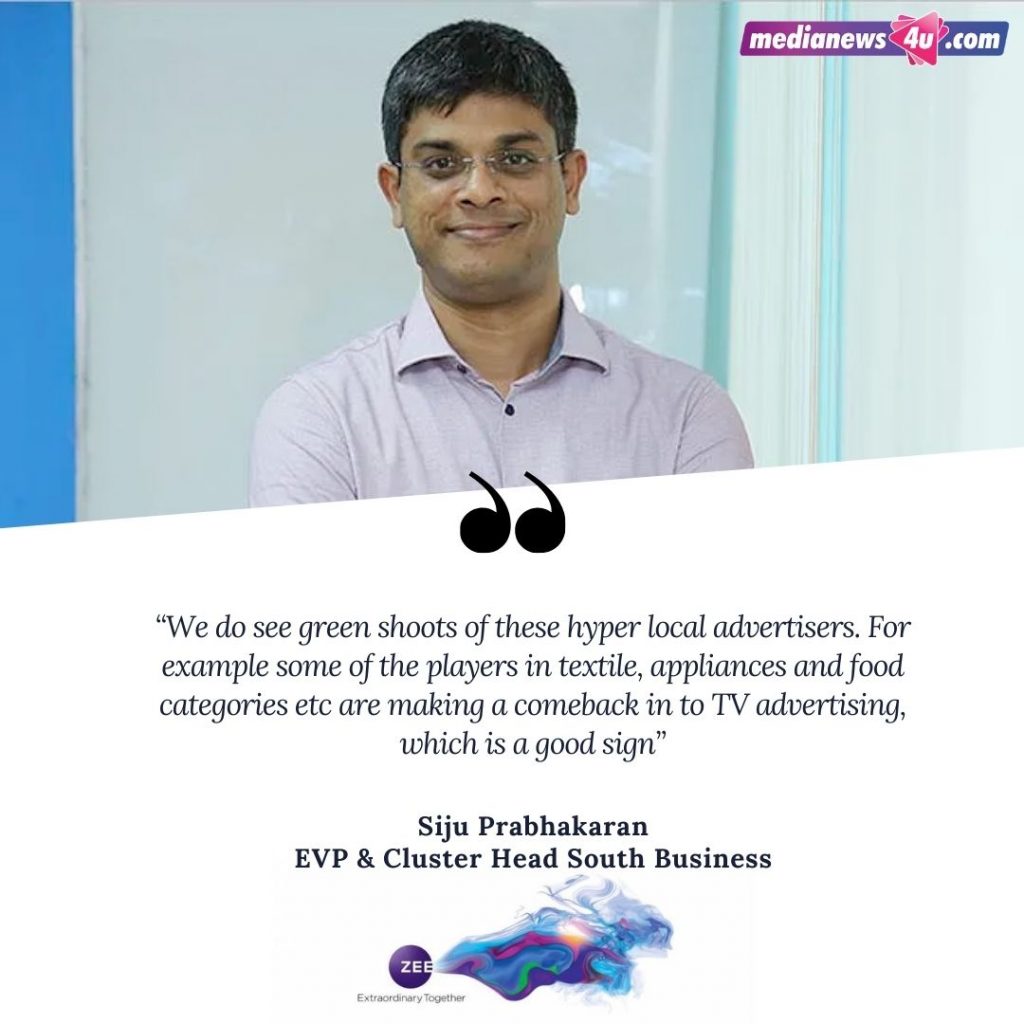 Any plans to hike Ad rates for the festive season up to Pongal? 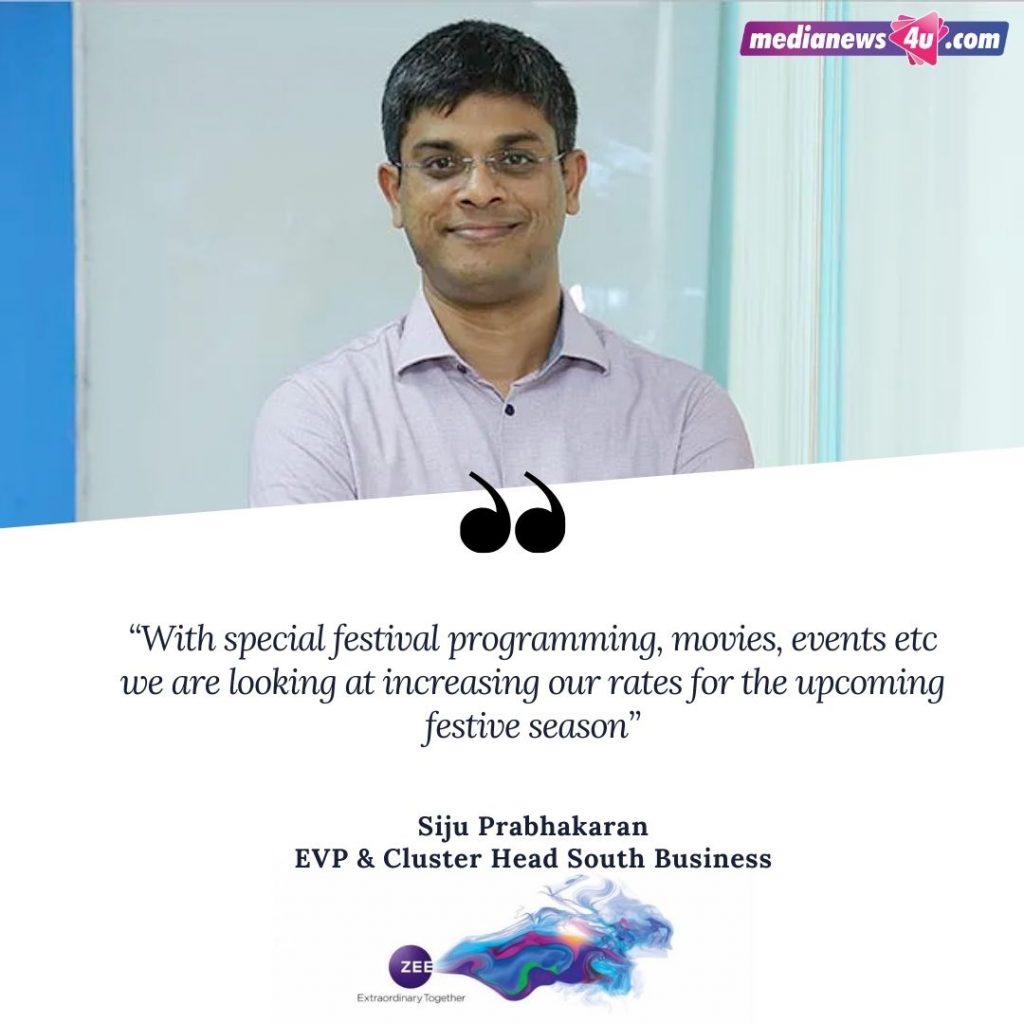 New Delhi: ART Fertility Clinics, a leading institution of Reproductive Medicine with clinics in Abu Dhabi, Dubai, and Muscat, has...