The campaign film takes us on a journey of a construction labourer and his son, whose dreams and desires are shaped by his surroundings. The message of having a strong will and determination resonates throughout the film, and the bond between the father and the son is also depicted beautifully.

We spoke to Pushp Raj Singh, President Marketing, JK Cement Ltd. (Grey Cement Business) on the campaign and the reason to launch this campaign now.

As a leader in this category, how has the journey been for the company and you?

The journey has been quite exciting for both, the company and myself. The environment where we operate in is very dynamic and dependent upon a lot of external factors. Cement is among the essential commodities which is vital to the infrastructure development of a fast-growing economy. The industry is also influenced by lot of government policies and infrastructure-related decisions. Moreover, we operate in an environment where we have to compete with 40+ other cement companies on a pan India level, which makes the operations more challenging.

However, we are at a continuous growth journey and have expanded our capacities from 10.5 Million Tons to 14.7 Million Tons in last one year and intend to become 20 Million Tons in next few years. The company’s core value of keeping “people first” makes us a promising brand. I also personally believe that “People” are the most important assets and driver for the growth of any organization. We at JK Super Cement, have an experience of 45 years in cement manufacturing to deliver the best in class product to our customers. We have successfully positioned our brand which is known for building safe structures. A very touching and emotional campaign, #Yeh Pucca Hai, please tell us the message behind this campaign?

Yes, it is great to see that even you could relate to the emotional message that we were trying to convey. The message behind the #YehPuccaHai campaign is to showcase how JK Super Cement as a brand always stands for building safe structures with a solid foundation. JK Super Cement’s mission is to provide safe homes for all which is in line with its brand slogan “JK Super Cement – Build Safe!” The word “Pucca” has been creatively used in all its brand positioning, emphasizing on JK Super Cement’s commitment to strength, consistency and durability.

In addition to this, we also wanted to bring out the toil of our construction workers who work day and night to ensure that we live in safe homes. With this campaign, we wanted to highlight the social and emotional quotient associated with the labourer. The construction workers are the ones who are at the base of any construction cycle and often their work is not given the credit that it deserves. Workers are one of the pillars of a safe nation and it is only their hardwork that ensures that all of us can live comfortably& safely. #YehPuccaHai campaign highlights the strength and determination of the workers who are devoted to their work.

The video narrates an inspiring story of a labourer and his son, and shows how dreams can come true with perseverance. It underlines the importance of having big goals and moving forward in life. The campaign strikes an emotional connect with the viewers and hence it has gained immense popularity and support. JK Super Cement as a brand strives to take care of the people at the bottom of the ladder. 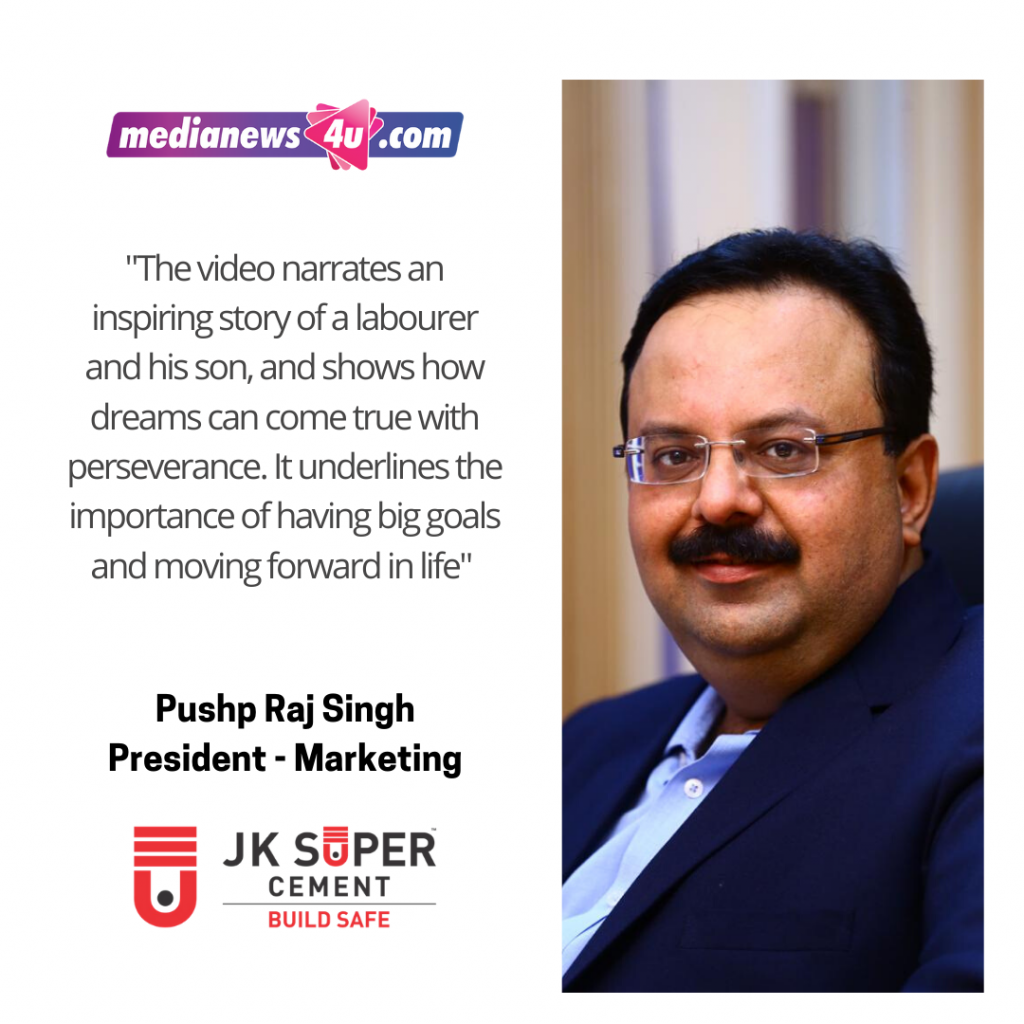 In this time of crisis and pandemic, you have highlighted the labourer and have made everybody feel as to how important they are, how did this idea germinate? 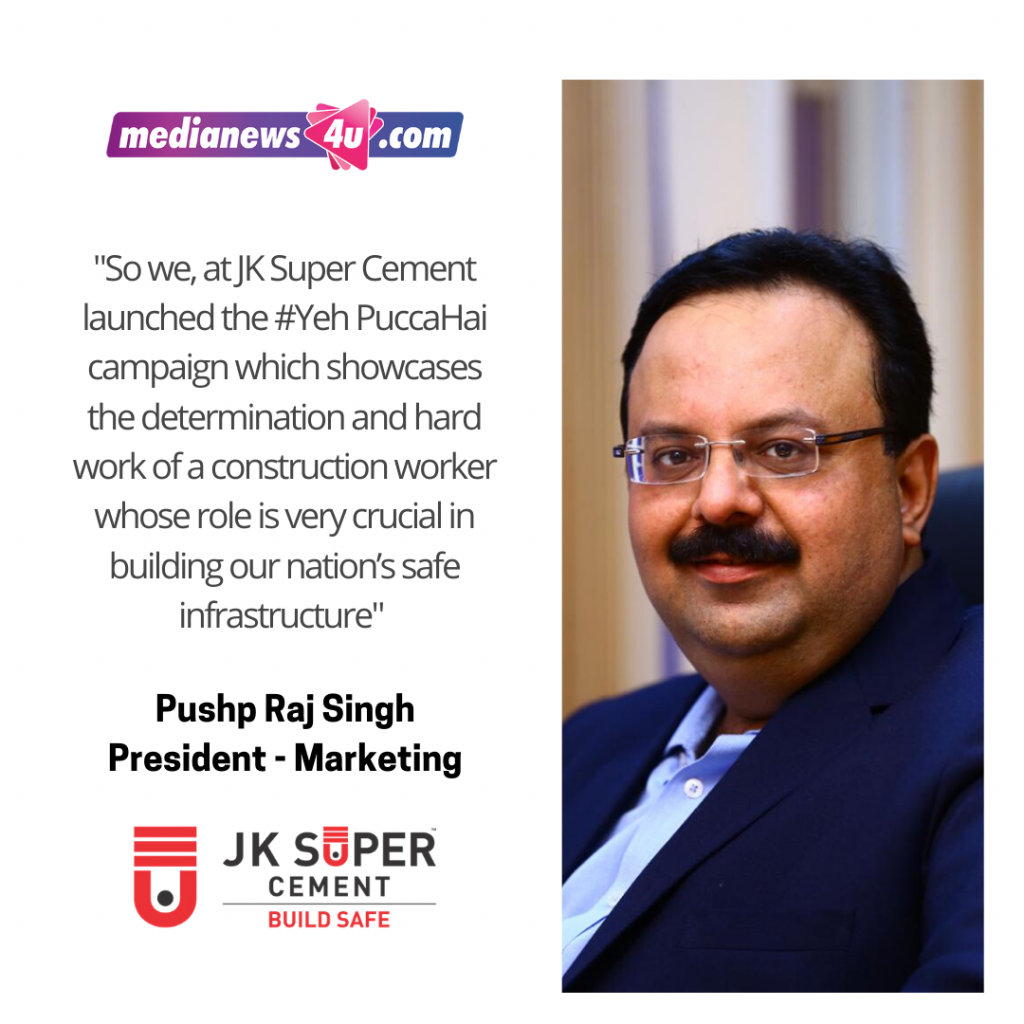 How was it visualized by the creative agency?

The campaign film takes us on a journey of a construction labourer and his son, whose dreams and desires are shaped by his surroundings. The message of having a strong will and determination resonates throughout the film, and the bond between the father and the son is also depicted beautifully. The film has been conceptualized in collaboration with Social Cloud Ventures Pvt Ltd.

Now with the lockdown slowly easing up how are you seeing the construction business gearing up for the new normal?

The lockdown period was definitely difficult period for everyone, however with the Unlock 1 announced by the government, construction activities have started and we have witnessed a good demand from the rural areas. The urban demand and the projects continue to remain subdued, which we hope will improve considerably in the coming months. With the easing of the lockdown restrictions, the transport sector is also improving, and we hope that we are able to see a boost in our business for the upcoming months.

In the Post-COVID era, we are definitely expecting to see a greater demand in both the cement and housing sector. We hope to see that workers gain more employment and are able to return back to their workplaces and contribute to the economy. We also wish to see a revival of the cement industry, in terms of increasing operations and getting our business fully functioning again. 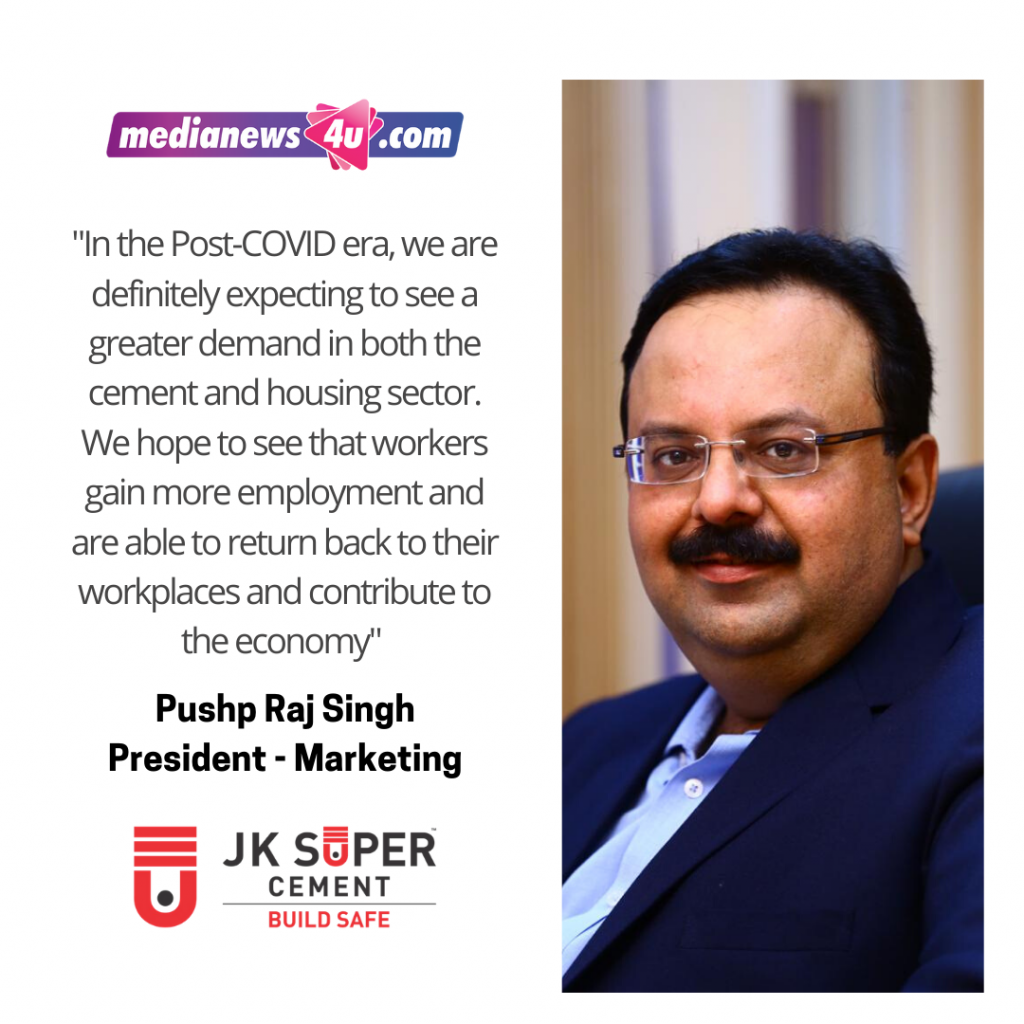 The campaign has been received very well… your thoughts. 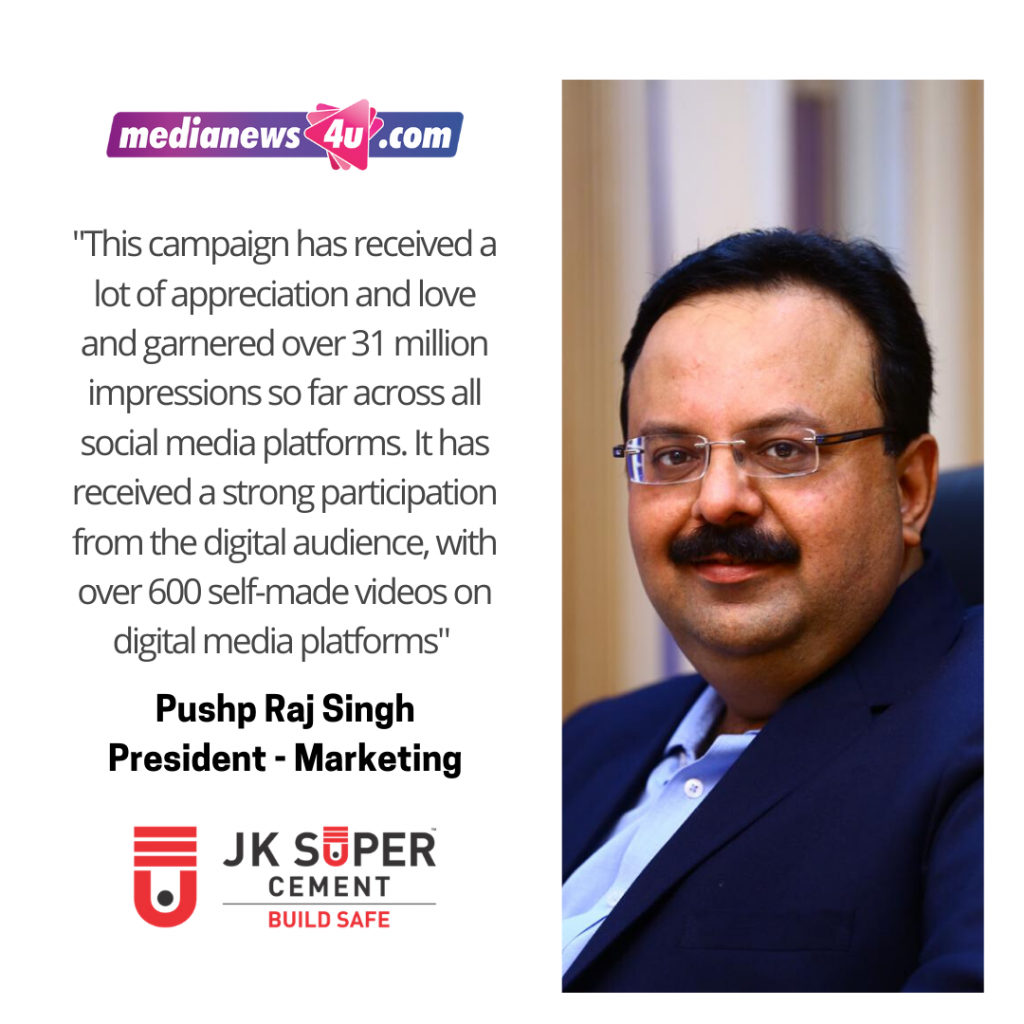 JK Super Cement salutes millions of construction workers whose efforts build a safe nation. Its mission is to get them the respect that they deserve. We invite the audience to share their salute to the workers by clicking on the “I Salute” tab on our microsite. The audience was also invited to participate in a quiz based on the Yeh Pucca Hai video to win exciting prizes.  The Yeh Pucca Hai song has been released across various music streaming platforms such as Jio-Saavn, Apple Music, Wynk, Amazon Music and Hungama, and is receiving a lot of love and support from the listeners.

As a part of this campaign, JK Super Cement has also made a video saluting #SuperDrivers. Often in the media, the efforts of doctors and other frontline workers are lauded but attention is not paid to the truck drivers who travel miles to transport the raw materials. Despite the situation today, they undertake risk and ensure that goods are transferred in a safe and secure manner. JK Super Cement salutes the spirit and hard work of truck drivers.

The #YehPuccaHai campaign focuses on multiple aspects, ranging from safety, strength and the strong foundation which is built by the grit and determination of our workers. With this campaign, we hope to see that workers all over India are given the respect that they deserve. We at JK Super Cement endeavor to build safe homes for all and this is only possible due to the immense efforts and hardwork of our construction workers.